Winston Peters and the NZ First party have made another blunder after their second "woke brigade" tweet had to be deleted because of a racial slur.

On Tuesday, Peters tweeted: "New Zealand is a proud and tolerant nation. We won't pander to the imported outrage on display at the weekend.

"It's simple. No matter your race, gender or creed - we put New Zealanders first!"

The original tweet had been deleted after it contained an image created by Third Culture Minds, which they claimed breached copyright.

They told 1 News they did not approve of the party's "ill-informed messages associated with our imagery".

Now Peters has had to pull a second tweet from his own account after the background image featured a protester holding a sign where the word "n*****" was visible. 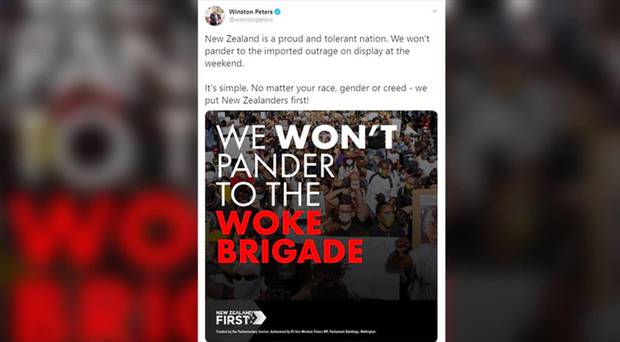 Winston Peters' original tweet had to be taken down due to the image breaching copyright. Photo / Twitter

According to a spokesperson for Peters, the party has been running the Deputy Prime Minister's account.

Yesterday, when asked about who he defined as woke, Peters said: Well it's someone that woke up yesterday and believes they have a greater social conscience than I've got - that's what I believe the woke brigade are."

The tweet sparked outrage. One person wrote: "I marched this weekend because I'm against police brutality and racism, including in USA and Aotearoa. If that's woke, then wake up."

Last week, he described the outcry about some of the country's statues as a "wave of idiocy".

"A self-confident country would never succumb to obliterating symbols of their history, whether it be good or bad or simply gone out of fashion," he said.

And "what next?', asked Peters. 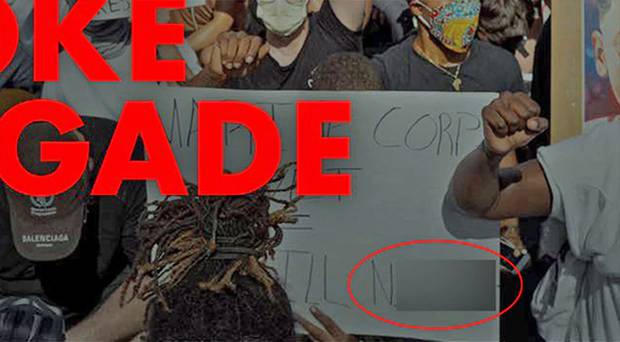 "If one doesn't approve of war we pull down our cenotaphs? Should we demolish every school that once applied corporal punishment? Should Gandhi's statue be thrown in the Wellington harbour because we don't agree? Should knighthoods to the undeserving be post-humously withdrawn? Do Māori now disown our mixed heritage?

"The idea that statues of Captain Cook, the greatest maritime explorer of his age, be pulled down because of the history that followed him is disgraceful," Peters said.

"The woke generation are the equivalent of a person with no long-term memory, stumbling around in the present without any signposts to guide them.

"If a person, like a country, doesn't know where they have come from, they have no way of knowing where they are going," he said.

"Deal with it, grow up and read a book."