The Green Party is being warned that a fertiliser levy is not a solution to more sustainable farming.

The Greens unveiled its agriculture policy in Canterbury at the weekend, where the party announced its plans to levy nitrogen and phosphorus fertiliser sales.

They also want to establish an almost $300 million fund for the transition to regenerative and organic farming.

Keeping animals fenced out, planting along the banks and adding oxygen weed are just a few of the measures he takes to keep his waterways clean.

To prove how clean the water is at his man-made drain he took a handful and drank it.

"So this takes all the water off my dairy farm and I just drank it right in front of you," he said.

"Plans are more now diverse, they include not only the irrigation and nutrient and soils and the management of animal effluent, they also include things such as water use, biodiversity and also provision for mahinga kai and other cultural needs."

Ashby said in Canterbury those plans (FEPs) are then audited. 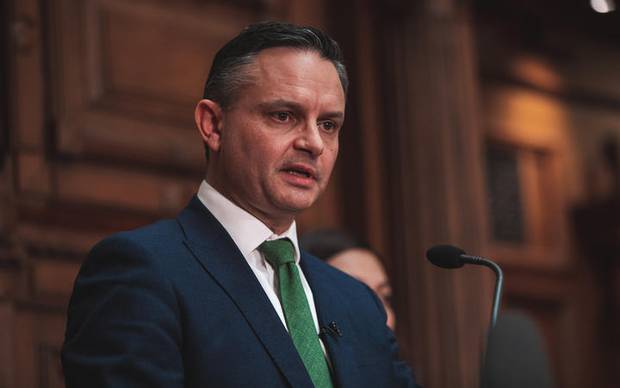 Co-leader James Shaw said the party planned to introduce a $297m fund over three years to support farmers into regenerative or organic farming.

"The dairy sector themselves know and are working with other sectors and with government in order to provide this transition towards more sustainable forms of farming that have lower greenhouse gas emissions and less nitrogen going into our soils and into our water.

"Much of this came from them saying look we want to actually be the solution here but people need the support and so that's what we are trying to do," he said.

But with the carrot comes the stick.

The party plans to pay for that fund in part using $33.9m raised through a nitrogen and phosphorous fertiliser levy.

The levy will be 2c per every kilo, which the party claimed would cost the average dairy farm $1515 annually.

But Ashby said that would not make farming more sustainable.

"A better thing to do rather than a tax is to benefit farmers to help them complete farm environment plans and maintain those plans.

"A farm environment plan, in my opinion, is the vehicle to change, a further tax to farmers will create further pressure on farmers and will create another layer of cost to the farming industry," he said.

The Greens' policy also included a limit on dissolved inorganic nitrogen (DIN) in waterways of 1mg per litre.

It would also want to progressively reduce nitrogen fertiliser application to the 150kg per hectare national average within two years.

"At a time when we need agricultural exports more than any other time because of what has happened with Covid and the borders the Green Party wants to send agriculture back 100 years.

"That will really limit our ability to sustain the economy in very dark times," he said.

Bennett said the policy was a slap in the face for farmers.