A punter is furious after the TAB refused to pay out on a bet where he claims to have won more than $110,000.

As each result came through, he soon realised he had won a whopping $110,175.91. Nepe's mind started racing thinking about what he could do with the money.

"Once I saw each bet tick off I started getting really excited and starting planning what I'd do with the money. I couldn't believe this was really happening," he told the Herald.

"I was thinking about maybe putting a deposit down for a house or starting my own business." 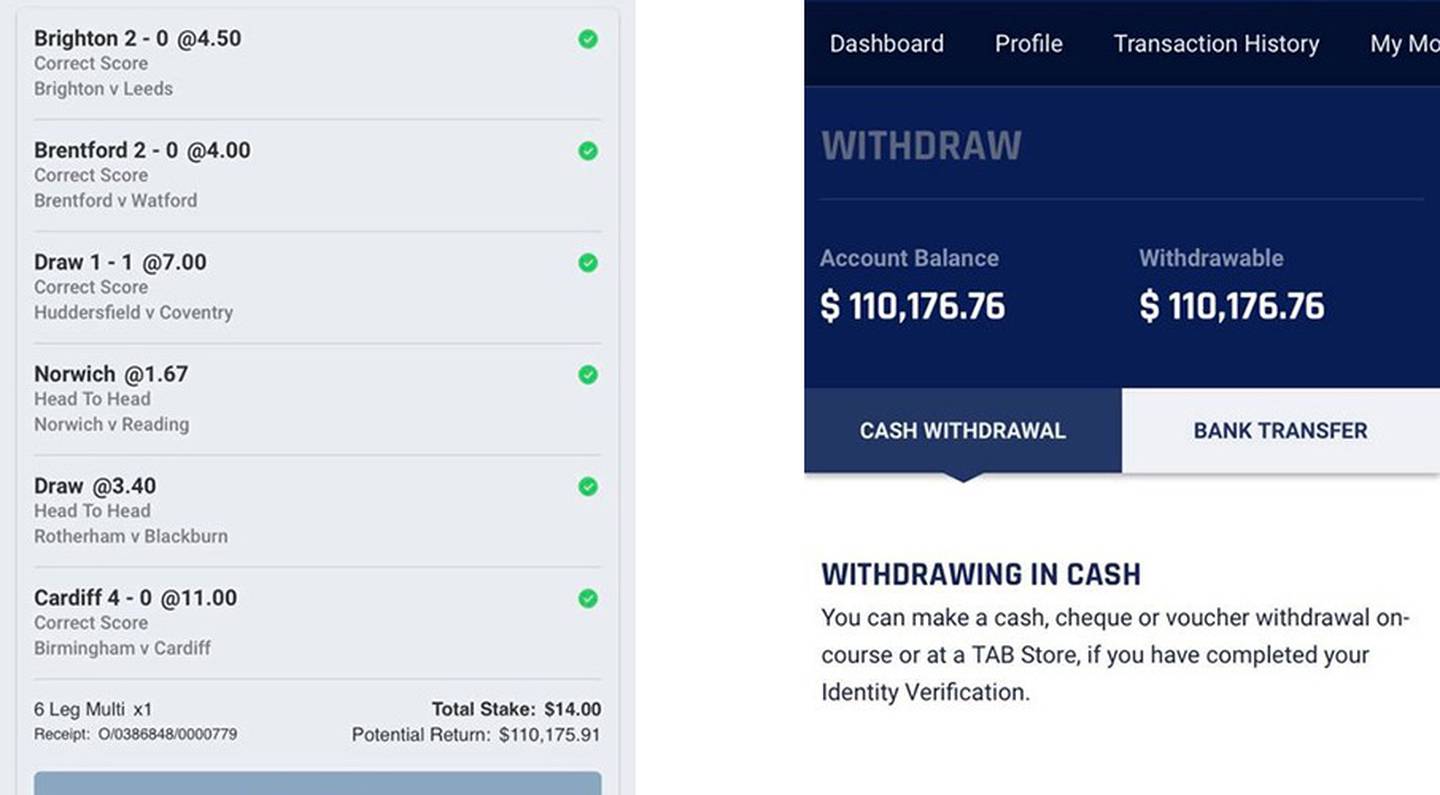 Corbin Nepe's live multi was placed at 3.48am, minutes before the scheduled end of all six games. Photo / Supplied

Initially the TAB deposited the winnings into his betting account. But that money was later taken back by the betting agency.

This left Nepe, who lives in Hawke's Bay, frustrated and scrambling for answers. He contacted the TAB who told him there had been an error with the odds at the time the bet was placed so voided his multi and refunded his $14 stake.

Simon Thomas, the TAB's general manager of customer and betting, told the Herald in a statement they had suffered a "technical malfunction" and decided to void and refund all bets that were placed during a four-hour period.

"Regrettably, the TAB's betting platform suffered an unexpected technical malfunction between approximately 2am and 6.15am on Sunday, May 2, which meant that the betting odds were not updating on the TAB's website.

"Bets were able to be placed on live events at odds that did not reflect the match situation, and were substantially incorrect. This meant that there was an opportunity to bet on events that were all but over.

"As a result of the technical issue we made the rare decision to void all bets which were placed after the matches had commenced, to ensure the integrity of the bets. It was very regrettable and we apologised to impacted customers for any inconvenience.

"TAB NZ pays out millions of dollars in winning dividends to customers every week. This was an isolated incident which was quickly resolved. However, regrettably it did impact a small number of customers at the time."

All six of the games Nepe bet on started at 2am, the same time the alleged technical malfunction occurred.

The TAB claims they voided 1232 bets during the malfunction, some of those were losing bets which they also refunded.

According to the TAB's terms and conditions, they can void and refund any bets where a "pricing error is so substantial that it cannot reasonably be attributed to an error in judgment on behalf of the TAB", and/or that a "demonstrable technology or software malfunction" had occurred.

Nepe disputes the TAB's claims of a malfunction and asked them to provide evidence of a technical malfunction.

He claims the TAB had shown him odds on a different website at the time his bet was placed in a bid to prove their own odds were sustainably incorrect and a malfunction had occurred.

The Hawke's Bay punter says another betting agency's odds are not relevant to those displayed on the TAB's own platform.

"The odds always change for live betting. Any change in the odds while in the process of placing a bet doesn't allow the bet to get accepted, so the odds had to have been right if my bet was accepted.

"I believe the odds for each game were pretty reasonable given the match situation in each game I bet on.

"They tried to send proof by showing odds from a different website as a comparison to what it should have been. But different betting agencies have different odds all the time anyway. So it was very suspicious."

While he could not comment directly about Nepe's case, Smith and Partners senior solicitor Nathan Tetzlaff told the Herald terms and conditions is typically an enforceable contract.

However, he says if a customer believes they have grounds the terms and conditions haven't been met, there are steps they can take.

"Terms and conditions will typically be an enforceable contract, providing that the consumer using the service has access to the terms beforehand. Providing that the Consumer Guarantees Act or any other laws are not breached, the parties are free to enter an agreement setting out how the provision of services will work.

"Terms and conditions will sometimes address what happens when something goes wrong, whether that is a failure of technology, or some mistake or negligence by the provider.

"If the service provider and consumer agree to terms and conditions that give the provider an 'escape clause' if something goes wrong, then as long as the provider follows that clause carefully and it doesn't breach the law, then they may be able to rely on this.

"The end result can be a very disappointed consumer. In this sort of situation I would initially conduct a three-part assessment.

"The first step would be to consider whether the situation is genuinely covered by the particular clause in the terms and conditions.

"The second step would be to consider whether it is lawful for the provider to rely on this particular clause in all of the circumstances."

"The last step is to ensure that the service provider can actually prove that the situation is covered by the clause. In the case of a failure of technology, I would request proof from the provider to back up their claim."

Nepe doesn't hold out hope of receiving his six-figure winnings he believes he fairly won, but is hoping the TAB will offer some type of fair compensation.

He told the Herald the thrill of winning $110,000, only for it to be taken away, has taken a mental and emotional toll on his wellbeing.

"I just want some type of compensation for my winning bet. It's actually been a nightmare mentally, I wish it never had happened.

"It's been pretty rough the last two weeks. Being a seasonal worker I thought finally I can get myself ahead.

"It's like winning Lotto then two days later they say 'nah jokes sorry'.

"I'm just frustrated they can make an error but the customer is the one that's punished. Punters make errors all the time but don't get refunded, yet the TAB get away with their error."