The first few days of summer are expected to bring one of the largest storms of the year.

On Saturday, Hanmer Springs was the hottest spot at 30C, followed by Alexandra at 28C and Palmerston North at 27C.

And the good weather is forecast to continue for much of the country today, the official first day of summer, and Monday before things take a turn.

Temperatures should reach 24C in Auckland and in Northland, and an impressive 28C in Hawke's Bay.

On Monday night, a large area of low pressure will develop in the Southern Ocean, creating a large storm which will span thousands of kilometres and brush New Zealand and southeastern Australia.

WeatherWatch has described it as "one of the larger storms in New Zealand this year".

The area most impacted by rain will be the West Coast, with slips, flooding and road closures possible over the next seven days, WeatherWatch reported. 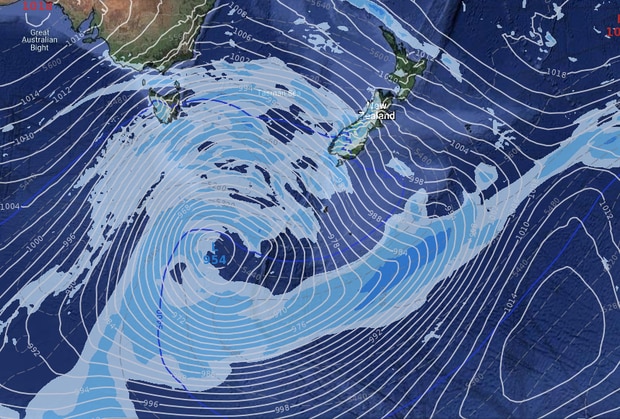 A huge area of low pressure will develop next week in the Southern Ocean, creating a large storm. Photo / WeatherWatch

Snow could top the ranges too. Winds will be strongest in the east, but especially around the mountains and Cook Strait next week.

On Monday night and across Tuesday a surge of gale-force winds are expected to move up the South Island, Cook Strait and the lower North Island.

It will affect the eastern side of the South Island and Wellington and southern Wairarapa. Wind warnings may be possible for a time.

Over Wednesday and Thursday, gusty northwesterly winds could blow for some regions including Wellington, Cook Strait and through the Southern Alps but it won't be as blustery as on Tuesday.

On Thursday, a pool of slightly cooler air will brush the West Coast, Southland and coastal Otago.

Wellington has a bit of a windy week ahead but only Tuesday has the severe gale risk.

But not everyone will be hampered by the poor weather.

The eastern North Island north of Masterton should enjoy fine weather. That included Hawke's Bay, which has no rain forecast for the next 10 days and could enjoy highs of up to 30C, and the Gisborne region.

Northland also would be windier than normal and only experience brief rain or showers.

"Being in a ship in the Southern Ocean next week would be terrifying, with gigantic seas and hurricane force winds," WeatherWatch said.

"But for New Zealand and Tasmania, we're on the edges of it and because it's so large we will have plenty of non-severe weather in the mix too."