New Zealand officials say it's highly likely a new coronavirus called 2019-nCoV will arrive in the country, as its spread around the world continues. What is it? And what might it mean for New Zealand if it arrives here? Science reporter Jamie Morton explains.

Since then, it's infected more than 2700 people and killed at least 81.

Its symptoms - fever, coughing and difficulty breathing - are similar to a range of other illnesses such as influenza.

Experts from the Chinese Centre for Disease Control and Prevention have confirmed the virus first jumped from animals to humans inside the Huanan Seafood Wholesale Market in the heart of city.

There have been cases of 2019-nCoV reported in some other Chinese provinces and countries – and some of these cases have no history of travel to Wuhan.

GIVEN WHAT WE KNOW ABOUT PREVIOUS OUTBREAKS, WHAT ARE THE POSSIBLE ANIMAL ORIGINS?

Scientists don't yet know how 2019-nCoV is transmitted to people, but it's likely that it comes from an animal.

There is evidence that 2019-nCoV can spread from person to person in the community and in health care settings.

David Hayman, a professor of infectious disease ecology at Massey University, said there was "strong evidence" the virus came from bats, if not immediately, then in the very recent past.

"That is quite different to Mers, where the genetic evidence supports it having its ancestors in bats, but Mers CoV having circulated in camels for some time prior to human infection," he said.

"There were some exciting headlines about snakes being an intermediate host transmitting the Wuhan virus to people, but that analysis had some issues.

"It may be that there is another intermediate host, like civets in the meat markets may have been for Sars, but the genetic evidence suggests the viruses have not circulated in these species for very long, if at all, because this virus in people is so closely related to ones discovered in Chinese bats."

HOW CAN THE VIRUS CROSS OVER FROM ANIMALS TO HUMANS?

That answer really depended on the virus, Hayman said.

"For example, for viruses like rabies no mutations are required, but the transmission depends on the infected animal biting an unvaccinated person.

"However, for some viruses, they may require some specific mutations before they can infect people."

For example, he said, there were close relatives to this and Sars like coronaviruses that seemed unable to infect human cells in the laboratory and are not reported in people in nature, whereas Sars coronavirus and the new Wuhan coronavirus can. 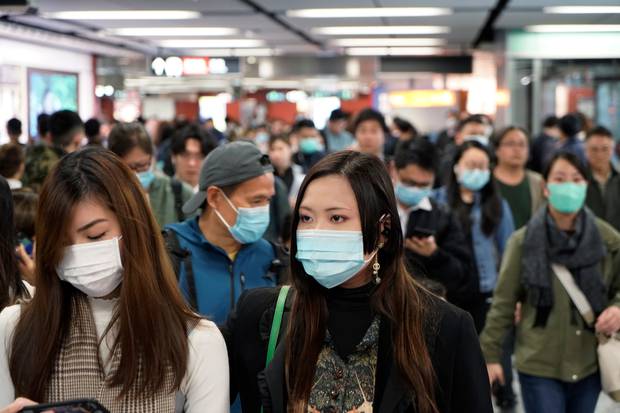 Passengers wear masks to prevent an outbreak of a new coronavirus in a subway station, in Hong Kong. Photo / AP

WHERE HAS IT BEEN FOUND SO FAR?

The vast majority of cases – and all of the deaths so far – have occurred in China.

Nearly 1,500 cases were have been confirmed in Hubei province, and the youngest patient so far has been a nine-month-old girl in Beijing.

Elsewhere in the world, there have been eight cases in Hong Kong; five cases in the US, Macau, Australia and Taiwan respectively; four each in Singapore, Malaysia, South Korea and Japan; three in France, two in Canada and Vietnam; and one in Nepal and Cambodia.

As at the weekend, the Ministry of Foreign Affairs and Trade - which was advising Kiwi travellers to avoid Hubei province - reported there were 369 New Zealanders registered on SafeTravel as being in China, of whom 16 were registered as being in Wuhan.

National is calling for the Government to follow the lead of Japan and the US and evacuate all New Zealand citizens from Wuhan – something Prime Minister Jacinda Ardern was seeking advice on.

New Zealand officials say it's highly likely a case will be confirmed in New Zealand at some point.

Two samples of suspected cases in New Zealand have been sent to Australia, but have come back negative.

HOW EASILY COULD IT SPREAD IF IT ARRIVED IN NEW ZEALAND?

University of Auckland microbiologist Associate Professor Siouxsie Wiles has stressed that the chances of New Zealand seeing an outbreak like is happening in China is very low.

"That's because we don't have the same population density as China and are in a good position to be able to identify and isolate infected people and anyone they have had contact with to stop the infection spreading," she said.

Wiles noted a study that has given some insight into the transmissibility of the virus, following a family of six from Shenzhen.

The family visited an infected family in Wuhan and then returned home, infected, and spread the virus to another family member.

"These cases clearly show the virus can transmit from person-to-person, with five of the six family members becoming ill," Wiles noted. 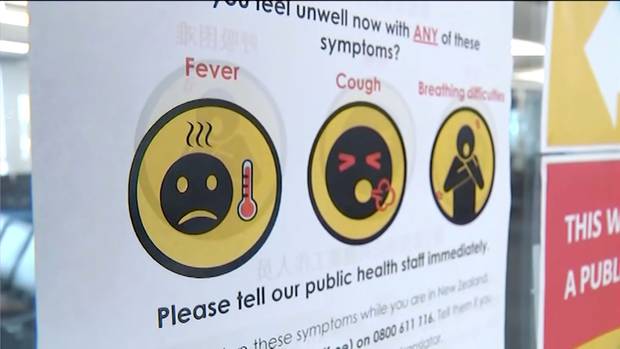 Posters have been placed at Auckland Airport to urge people with symptoms to contact public health staff immediately. Photo / Supplied

"The incubation period from these cases seems to be three to six days. But these cases are likely to have involved people in close and repeated contact."

But she added that none of these papers have able to answer several important questions, such how infectious are people before they show symptoms, how much contact is needed to get infected, and whether infected people go on to have symptoms.

Professor Mick Roberts, a professor in mathematical biology at Massey University, explained that predicting the spread of a novel virus required estimates of the basic reproduction number.

This was the expected number of secondary cases due, to a typical primary case over the course of its infectious period.

Roberts said a recent report from Lancaster University suggested that the novel virus from Wuhan had a basic reproduction number of 3.8.

Coupled with biological properties assumed to be similar to those for Sars - and assumptions concerning travel and contact patterns in China - a set of predictions were presented that prompted a British tabloid headline reading: "ZOMBIELAND: Coronavirus will infect 350,000 in Wuhan alone experts say."

Yet the 350,000 figure was at the upper 97.5 per cent of the report's prediction, and based on no changes in transmissibility until February 4.

Another report, from an Imperial College group to the World Health Organisation, estimated the basic reproduction number to be 2.6, which resulted in lower predictions of future epidemic size.

"All estimates so far assume that the novel virus behaves like Sars," Roberts said.

"As further data become available better predictions will be possible."

WHAT ARE NEW ZEALAND AUTHORITIES DOING?

This week, authorities stepped up measures by sending public health workers to meet all passengers arriving on flights from China.

At Auckland and Christchurch airports, workers were scanning arriving passengers for symptoms, and referring for assessment anyone feeling unwell or with a temperature higher than 38C.

"If a case is suspected, we have systems in place to enable us to test for it," the Ministry of Health's deputy director of public health Dr Harriette Carr said.

New Zealand labs were expected to be able to test for the virus by later this week; until then, samples would be sent to Australia.

The Ministry of Health has put a special incident control team in place, and the Government's Interagency Pandemic Group had also been convened as a precaution.

On top of that, the ministry has stood up the National Health Coordination Centre, and has activated New Zealand's pandemic plan.

Health Minister David Clark was presenting a paper to Cabinet today which would make the virus a notifiable disease – or one that needed to be reported to the Medical Officer of Health.

At the same Cabinet meeting, ministers were also expected to discuss powers of quarantine – something which Massey University's Dr Sarb Johal said could pose several implications.

"What we are seeing in terms of restriction of movement in China is unprecedented," he said.

"Quarantine doesn't come without risks. I wrote a paper back in 2009 published in the New Zealand Medical Journal outlining some of the psychosocial challenges involved in quarantine, including, how many patients experienced social stigmatisation and loss of anonymity and many described the emotional strain of quarantine and isolation.

"Parents had to confront changes in normal roles and routines, creating stress for entire families."

Most found it difficult to explain the situation to their children without provoking more fear, he said.

"Healthcare workers felt a duty to protect their children from being taunted or stigmatised by association.

"Spouses were physically isolated, for example, partners slept in separate rooms and were subjected to further pressure as they assumed responsibilities involving the outside world, such as school runs and shopping, as well as normal routine activities."

Some just-returned members of Auckland's Wuhan community – well aware of that stigma – have been voluntarily putting themselves into quarantine for two weeks.

WHAT ARE SCHOOLS BEING TOLD?

Education officials are advising students and teachers who've travelled to China and are at risk of contracting the deadly coronavirus to stay away from school for 14 days.

Anyone who was at "high risk of exposure because they have recently been to China or have been in close contact with someone confirmed with the virus" should to stay away from school for two weeks, Holsted said.

"As always anyone who is unwell should not be at school or at their early learning service. If you have a particular concern about any child, student or staff member, please urge parents to contact Healthline at 0800 611 116 or their GP for medical advice. 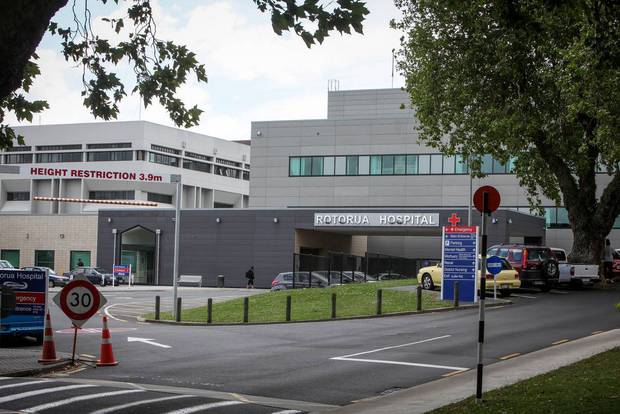 Three members of a tour group of 19 have been assessed at Rotorua Hospital out of concern they may have become infected with novel coronavirus infection. Photo / NZME

"If a student still attends school while showing symptoms the principal of a state school can preclude them if they believe on reasonable grounds they may have a communicable disease."

WHAT ARE THE GENERAL MESSAGES FOR THE PUBLIC?

All travellers to New Zealand who become sick within a month of their arrival were being encouraged to seek medical advice and contact Healthline at 0800 611 116 or a doctor and share their travel history.

It was important to mention recent travel from Hubei Province, particularly Wuhan, the Ministry of Health said.

And any known contact with someone with severe acute respiratory illness who has been in Hubei Province, particularly Wuhan.

As with all respiratory illnesses, people could take steps to reduce their risk of infection.

This includes regularly washing hands, covering your mouth and nose when you sneeze, staying home if you are sick and avoiding close contact with anyone with cold or flu-like symptoms.