Dramatic footage has emerged of an Emirates A380 plane almost being struck by lightning at Christchurch Airport as the South Island is battered by wild weather this afternoon.

The video was provided to 1 News by Daniel Currie of Garden City Helicopters, while he was the airport at around 3.30pm today.

"The view out our window onto the tarmac today! The Emirates plane waiting for the storm to pass," a post said on their Facebook page.

Metservice has issued a severe thunderstorm warning for Christchurch city, Canterbury Plains, North Otago and Central Otago, with the storms expected to be accompanied by large hail, damaging wind gusts and even tornadoes.

More than 1500 lightning strikes have hit the South Island over a course of a six-hour period, along with reports of hail the size of golf balls damaging roofing and breaking windows.

A Fire and Emergency (Fenz) spokesman said they had responded to nearly 40 call-outs from midday today in the South Island.

Thirty of those were in Timaru, where hailstones as big as golf balls pelted the streets and thunderclaps echoed through the city. 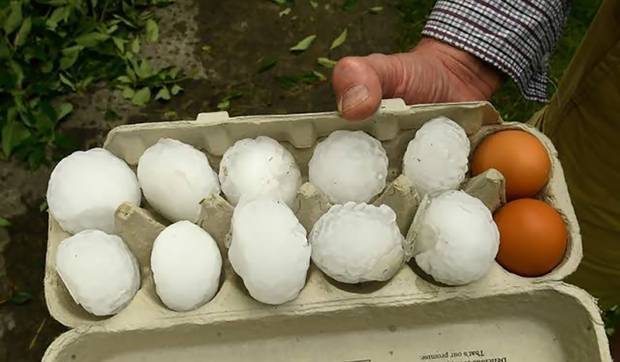 An egg tray shows the scale of some of the hailstones. Photo / Luke McGoldrick

A Christchurch local told the Herald enormous hailstones were denting cars parked on the street.

A Metservice spokesperson said these thunderstorms could be incredibly damaging.