Novak Djokovic's (attempted) trip to Australia was an unmitigated disaster.

Being denied entry at the airport, put into hotel detention, enduring two legal battles then eventually being deported was all bad enough – but the truth is the damage to Djokovic extends far beyond what happened this past fortnight.

The Serbian's legacy and what he values most in the sport – his standing among the tennis elite – was already on thin ice and any claim he had to the oft-discussed Greatest Of All Time (GOAT) status has now been flushed away for good.

Whether you think the unvaccinated Djokovic tried exploiting a loophole to secure his 21st grand slam title – a feat that would have seen him to surge to the top of men's tennis ahead of Roger Federer and Rafael Nadal, who both own 20 majors – or was unfairly treated as a political pawn, there's no denying the damage his visa saga has caused will scuff his reputation one way or another.

The youngest member of the "Big Three" has regularly spoken publicly about his desire to win the most grand slams and be the world's No. 1 ranked player for longer than anyone. Djokovic achieved the latter in March, when he set the record for most weeks at No. 1 (311), passing Federer (310), and he will be hoping to leapfrog his two greatest rivals into the outright lead of men's major winners soon.

"I value all the records and achievements greatly. Being historically No. 1 ranked player in the world is probably the paramount achievement of our sport," Djokovic said in November.

Nadal said last year his rival is "obsessed" with the concept of winning the most slams.

"He's more focused on just these things and it means a lot to him all of this stuff," Nadal said. "Like he's always saying and talking about these records and well done for him, but it's not my approach to my tennis career."

But try as he might, in the eyes of so many sports fans, Djokovic will never be on par with Federer and Nadal – two of the most loved players tennis has ever seen – no matter how many trophies he lifts or how long he spends at No. 1.

Dogged early in his career by accusations of faking injury or over-exaggerating physical ailments in hot weather, Djokovic has tried to redefine himself to sceptical fans. Winning non-stop helped, but it won't be enough.

A poll of news.com.au readers asking "Will Djokovic be the GOAT of men's tennis if he wins the most grand slams" has attracted more than 280,000 votes at the time of writing. A whopping 40 per cent of people (112,000) said: "No, he will never be in the same league as Federer and Nadal." Thirty-four per cent of respondents (95,200) agreed with the statement: "No, his personal views will ruin his reputation and legacy."

Only 11 per cent of voters said Djokovic would be considered the GOAT if he wins the most majors because "on-court results are the only thing that matter" while just 15 per cent said he would be the greatest of all time, "but people won't like to admit it". Make no mistake, that will hurt the Serbian superstar. After being accused of concocting a mysterious injury he refused to divulge at last year's Australian Open, Djokovic opened up on the pain of being, in his eyes, treated differently to his peers.

"I cannot say that it doesn't sometimes get to me - of course that an injustice or an unfair portrayal by the media affects me. I am a human being, I have emotions and naturally I don't enjoy it," he said at the time.

"I have the power only to control that which I am doing, not that which others are writing about me, how they judge or criticise me. After all, that is up to them and has nothing to do with me, I can't influence it."

Federer and Nadal have been able to influence that perception of them, not just through results but the way they conduct themselves and connect with fans. For Djokovic, that ship has sailed.

The nine-time Australian Open champion has done himself no favours in the pandemic. From holding an ill-advised exhibition tournament that flouted social distancing rules to dancing shirtless in nightclubs, and opposing vaccinations and spruiking wild conspiracy theories that reject science – such as the belief people can change the chemical properties of water with their emotions.

Add to that Djokovic's disqualification from the 2020 US Open for hitting a lineswoman, copping backlash for starting a breakaway players association and the fact he's been savagely booed during grand slam finals at both Melbourne Park and Wimbledon and you can understand why he might have a chip on his shoulder.

Already on the back foot when it came to matching Federer and Nadal in the popularity stakes, Djokovic's disregard for the dangers of the virus and this visa saga – including an admission he knowingly attended an interview and photo shoot while Covid positive – have eliminated any hopes he had of skyrocketing to No. 1 in everyone's books when it comes to likeability. Outside of his fanatical Serbian fans, that is.

Last year he explained his despair at being the target of "baseless" criticism but in recent times, Djokovic has been largely to blame for bringing much of the negative attention on himself.

"I am able to put my hands up and apologise when I have made a mistake, but yes, my mistakes are perhaps less forgiven in the public in comparison to other players and sports stars," he said last in 2021. 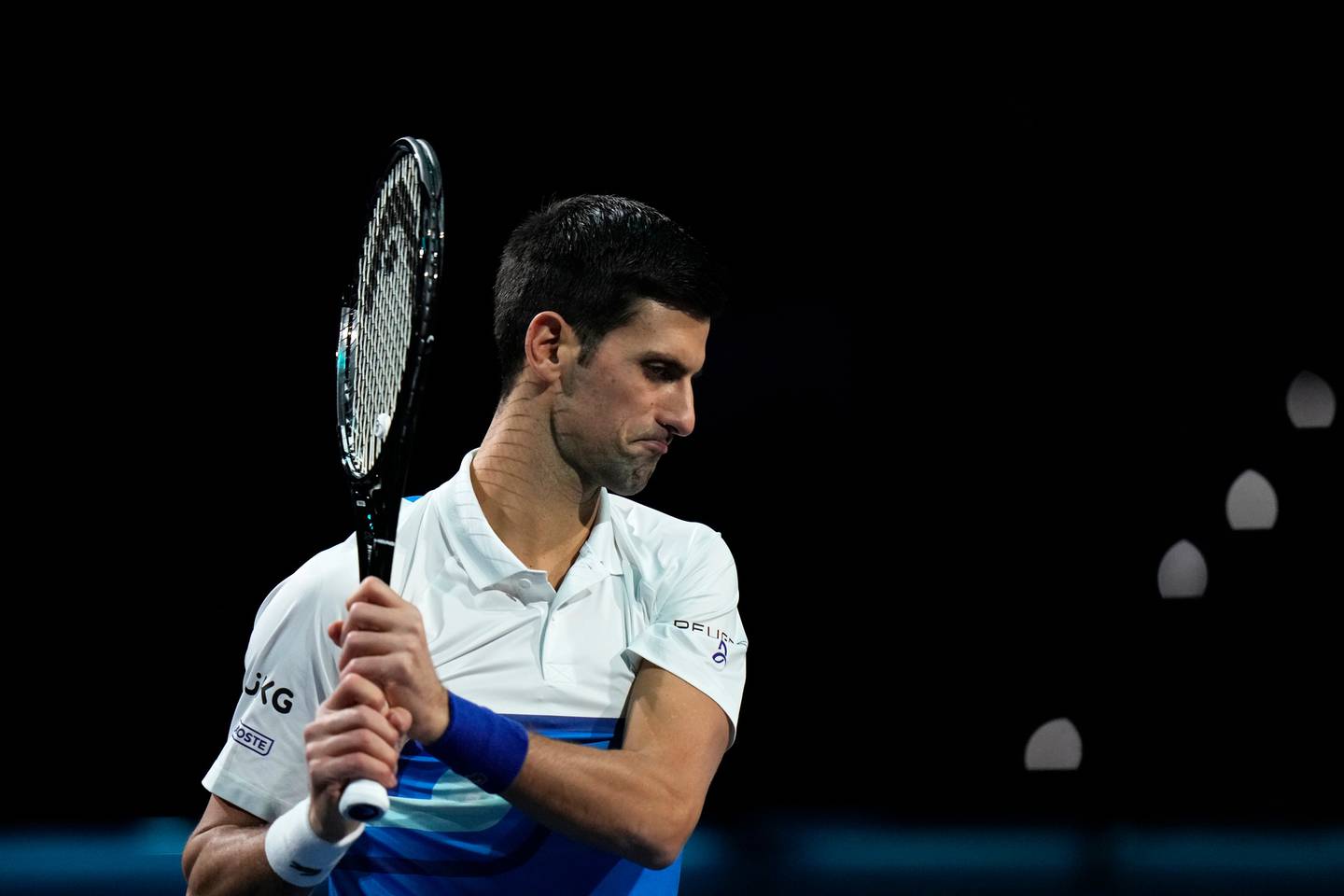 Novak Djokovic is on the hunt for greatness. Photo / AP

"Of course, it hurts when baseless criticism is fired your way and when you're treated differently, but in a way, that is the path I have chosen."

Federer and Nadal rarely need to ask for forgiveness but should the need arise they've got plenty of credits in the bank to fall back on. Djokovic doesn't have that luxury.

In another poll of news.com.au readers, 53 per cent of 188,000 voters (that's 99,640 people) when asked who was to blame for the visa debacle, pointed the finger at Djokovic because "getting vaccinated would have solved everything".

A different poll asking if cancelling Djokovic's visa was the right decision saw 83 per cent of 192,600 respondents say yes – leaving just 17 per cent in his corner.

At 34, the time to win people over has run out. Djokovic's reputation today – sullied further by his anti-vaccination stance – will reflect more broadly his murky off-court exploits than just his remarkable on-court achievements.

As Australian legend Lleyton Hewitt told news.com.au of Djokovic in 2020: "Obviously he's in an era now where those two guys (Federer and Nadal) are so well loved globally, and it's really hard for Novak to share that love with a lot of the other spectators of the sport.

"That's the tough thing. Roger and Rafa have been, certainly in my generation, the two greatest ambassadors you could have ever hoped for, for our sport.

"So, for Novak to come in, I'm sure that's frustrating for him because he feels like at times he is the greatest player.

"His record against those two guys, especially in big tournaments, what he's been able to do in the slams (is brilliant) … but that crowd support I don't think is ever going to change for Roger and Rafa."