It's such a small word, but it appears that the Government has banned it from all the spin-doctoring that has now become the standard response to the ever-increasing array of information that is finally emerging from behind the locked doors of the Department of the Prime Minister and Cabinet (DPMC) via the Official Information Act.

The latest examples include the emails they desperately tried to block that showed that, back in November last year, the Ministry of Health (MOH) advised the Government that it was time to start winding down managed isolation and quarantine (MIQ).

This was a revelation to me and the team at the Cross Sector Border Group because, at the exact same time that the MOH was advising the Government that MIQ was well and truly past its use by date, we had presented the results of our privately funded 151 Off the Bench trial that showed how, by using a number of Kiwi technologies that up until then had been ignored by the Government, we could start bringing our stranded Kiwis home by Christmas.

As part of the trial, we had commissioned an independent report from Ernst & Young.

Their finding was that:

- The trial we conducted exceeded all of the health and safety protocols that had been set by Government, and;
- The process we had trialled was immediately repeatable and scalable.

The DPMC were aware of this report, but they never put the Cross Sector Border Group together with the MOH to start working out how we could help them start the process of bringing people home safely as they wound down the requirement for MIQ.

Quite clearly there was work that needed to be done to bring the process into play, but we had designed a system built on science and technology and deployed it in the real world — not the simulated world that the Government used to scare us with facts like 40,000 people dying if we didn't keep everyone locked away.

It is telling that this Government, one that had built its spin on a "be kind" message at every available opportunity, could not find it in its conscience to say sorry to the thousands of Kiwi citizens and essential worker immigrant families who had become victims of a lottery system described by our High Court as inhumane — and unnecessary.

Such a small word with such an important message. We made a mistake; we won't do it again.

Which leads me to the spin around the announcement that they are about to trial a "new test" called Lucira. 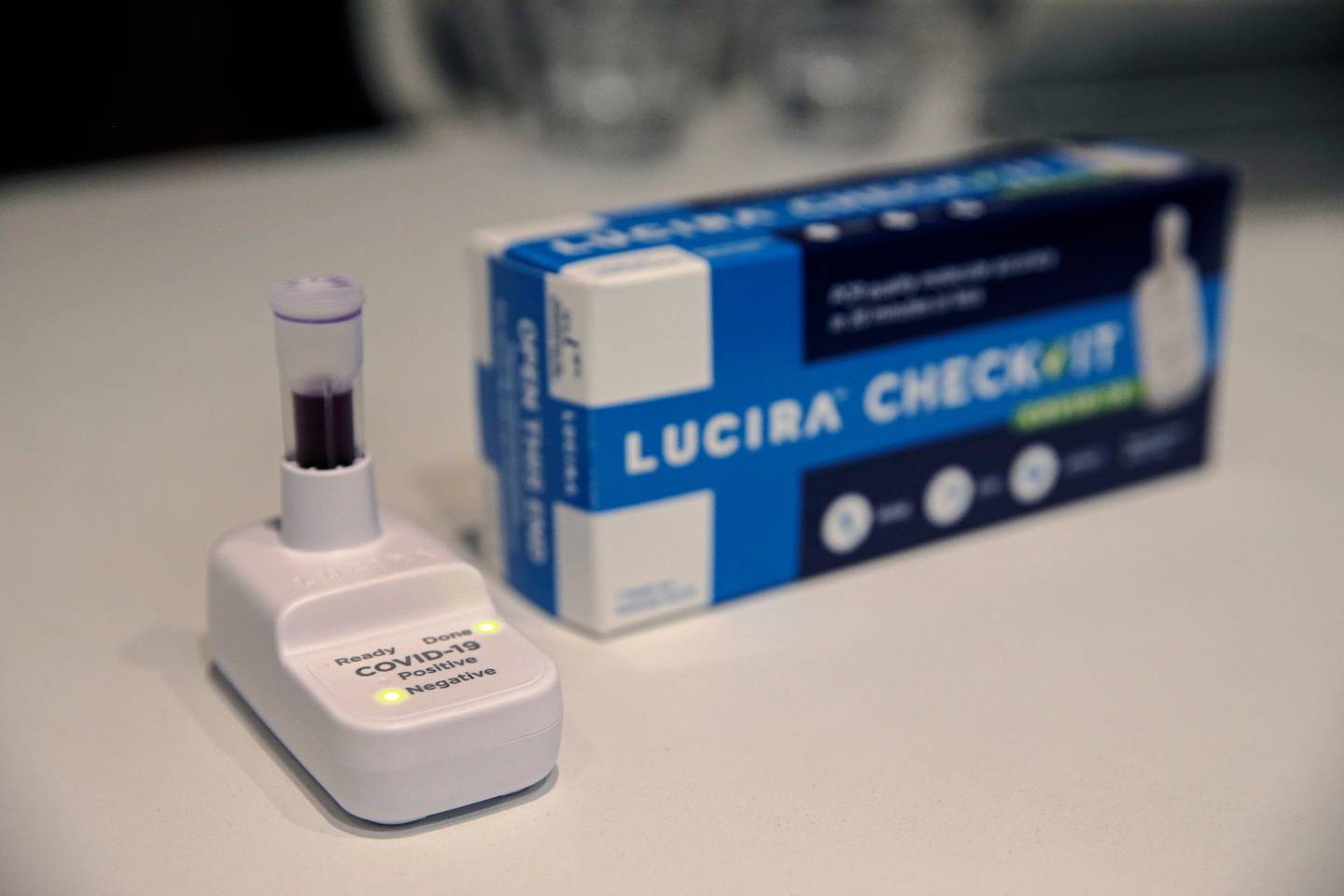 A Lucira Check It Covid test, a trial of which was announced by the Government on Sunday. Photo / Alex Burton

The spin includes a huge amount of self-praise and back slapping, thanking all and sundry for the great work they have done in pulling the trial together.

Here are some facts to help put this in context.

On June 10, 2020, this email was sent to the Government's Covid Response Team.

Good morning, As a Silicon-Valley-based American who has had a home in Wanaka for 20 years (and plenty of Kiwi friends), I'm keen to try to help New Zealand. My company (www.lucirahealth.com) is bringing a handheld, fully disposable molecular test for Covid to market a little later this year. I wondered if this might be interesting to use in New Zealand, particularly as a way to screen arriving passengers at AKL. The test uses a simple nasal swab, and takes 30-minutes to run. It provides a hospital-quality result.The Instructions for use are attached for your reference. It's a very easy test to run. Best regards. This was the reply that was received, on the same day. It appears the one thing that the Government isn't slow at, is turning down offers of help. Kia ora, I thank you for offer of assistance to the New Zealand Covid-19 response. We are currently examining a large number of testing methods and protocols to determine their reliability and appropriateness. We are not seeking further tests or testing methods at this time. However, we have retained your information. If your offer meets a need in the coming weeks, someone will contact you when required. Thank you again for your offer of support.

And so, the offer languished for almost two years while the other countries that had been offered the chance to be part of the Lucira trial took it up and approved it for use.

It was a game-changer.

A PCR equivalent test that delivered a result in 30 minutes. One that could be self-administered without the need to take up valuable time in overstretched laboratories.

It seemed like a no-brainer at a time when PCR results were taking up to a week, or longer depending on what neighbourhood you lived in, to be delivered.

In December last year, I introduced the Lucira team to Minister Verrall and Dr Ian Town, and they were supplied data from the other countries that had conducted their own independent trials on Lucira before approving it for use.

At a meeting with Minister Verrall, which I thought was to progress the work I had done with the team at Lucira, I was told that I could no longer make any comments on Lucira and, the icing on the cake, I was asked to refrain from writing "bad faith articles" about the Government if I wanted to stay involved.

That was in January.

It has taken three months for Minister Verrall to announce a trial, which experts like Terry Taylor, president of the New Zealand Institute of Medical Laboratory Science, have said could be completed by his team in less than a fortnight. A trial they could have conducted back in January.

The trial announced this week with Air New Zealand will take another three months.

That will make it six months since the Government took control of the programme that they knew nothing about until we informed them of it. Seven months since we offered to bring in 20,000 Lucira kits to trial alongside the PCR tests being done in MIQ — the test Terry Taylor and his team could have done in a fortnight.

And a staggering two years since the Government was invited to join the original trial.

Last week I was in Las Vegas where I could take a Lucira test at a number of stalls at the huge National Association of Broadcasters (NAB) trade show. A quick swab, continue checking out the show alongside 50,000 other attendees, and pop back 30 minutes later to confirm I was still negative. Pretty essential since almost no-one was wearing masks.

So, I can take a Lucira test in almost any other country in the world. I can even use the result of the one I took in Vegas to get back into New Zealand.

But when I ordered my own supply to keep my staff safe as they began travelling overseas again, it was detained at the border — it looks like the Government still hadn't cleared it for importation. That was something we ran into when we tried to fly 2000 free kits to Tonga back in January. We had to get a special exemption from Dr Bloomfield to land the plane in Auckland, en route to Tonga from the US, so they could test anyone needing to come ashore to help with the relief work.

Like so many things that have been happening with this Covid response, logic has gone out the back door. I can come into NZ using the result from this test, but I can't use it to keep my staff safe inside New Zealand. Instead, I have to use an inferior Rat, or find somewhere to send staff for a PCR test that can't be self-administered and will not give a result in 30 minutes.

The Government, it appears, has now taken control of the Health & Safety of our staff and denied us the ability to give them our test of choice rather than those Rats — which we all know have constraints around their ability to detect Covid before it is infectious.

Lucira is the test that we have done our own extensive research on, and it is by far the best tool available for keeping our staff safe. Not only here in their New Zealand work environment, but also as they head back overseas. It's a price we are prepared to pay to look after them, but the Government won't let us.

If our supply had not been detained at the border, three of our staff members would have travelled overseas last week, one to Mexico, with their own supplies of Lucira. That would have given us the highest level of confidence that we had done everything we could do to keep them safe.

Isn't that what we are responsible for under the Health & Safety Act, or has the Government now relieved us of that responsibility, yet again telling us to "trust us, we know what we are doing".

- Sir Ian Taylor is the founder and managing director of Animation Research.