"Only a congenital dunce can peruse the proceedings of the first Congress of American Revolutionary Writers, and doubt that the show was carefully staged by the communists. Every slogan of the Comintern was woven into the design of the performance. Its fundamental assumption was the perfection of Stalin's Russia, including its new literature. Messages from Soviet writers threw the audience into spasms of orgiastic enthusiasm. Every address was a direct or indirect salute to the Kremlin."

This was April 1935. For its relevance, keep reading. There is any number of scenarios very much alive in the world today, some more fluid than others. Right now, Hong Kong has centre stage with scene changes every day. This week I interviewed Jacob Shapiro, from Geopolitical Futures, specifically on what developments in Hong Kong might predict for Taiwan. Nothing good was the indication, largely because Taiwan was more important than Hong Kong.

With all the options for this week's attention, there was one persuasive influence: Peter Thiel, billionaire investor and part-time New Zealander. In a TV interview, the subject was "Globalist Google is in bed with the Chinese Military". Thiel's opinion was part inside experience in Silicon Valley, and part presumption based on that experience. He says Google is staffed by globalists who do not understand the threat that China poses.

In 2018 Google declined to tender for the US Defense Department's $10 billion Jedi contract, claiming it would violate its AI principles. However, "Google has a major research lab in China where, even though it's not working directly with the Chinese military, in effect, all the technology gets passed onto the Chinese military".

Thiel called it treasonous and referred to a broad base of Google employees that are ideologically super left-wing, sort of woke, and think that China is better than the US … It's more anti-American than anything.

I detest the word "woke". I can't tell you how much! Socialism is another! Why is it that after 1989 and the fall of the Berlin Wall, socialism is re-establishing its popularity? It's been referred to as "the failed idea that never dies". Its re-emergence is a combination of the education system, utopian dreams, and failures of democracy. Beijing, so far, is showing a great deal of patience with the Hong Kong dissidents. Were this taking place somewhere in mainland China, it would have been suppressed long ago and mainly out of sight. 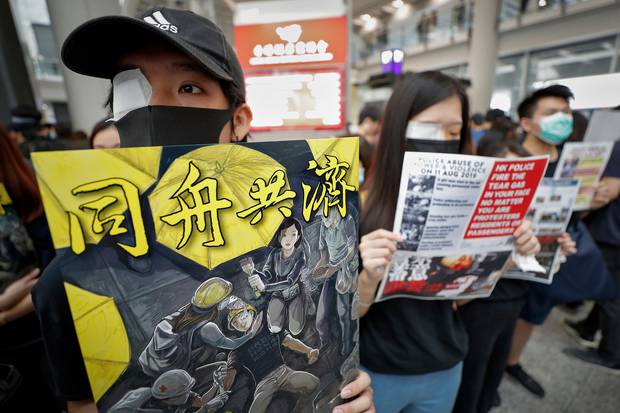 Protesters wear eyepatches during a protest at the arrival hall of the Hong Kong International Airport following reports that police shot a woman in the eye. Photo / AP

Argument has it that Beijing cannot afford to stain the streets of Hong Kong with blood, before the cameras of the world. Understandable, but at some stage this flexibility will expire. It must. One-time presidential candidate and long-time Washington commentator Pat Buchanan reminds us of "the greatest cybercrime of the century" — Beijing's theft in 2014 of the personal files of 22 million applicants and employees of the US government, many holding top-secret clearances.

That aside, and taking account of China's population, economy and physical size, Buchanan suggests this current issue is "likely to decide the destiny of our relations and the future of Asia, if not the world". Buchanan has always leaned to the extreme but he may have a point.

Here is my question: Has communism as practised in China, a) run its course, b) adjusted acceptably to the 21st century, or c) is no different to 1958? US General David Petraeus, in Australia last week, suggested China should be more like the West after all the inclusion it's been shown.

Whatever outfit the Chinese administration may be clothed in, there are important matters to remember. China is a one-party state. It still adheres to communism. Thirty years ago hundreds, maybe thousands of Chinese died in the June 4 Massacre in Beijing. Bob Hawke, Prime Minister of Australia, wept on television. But within hours, hundreds of millions of people around the world saw the images on their TVs. In the great Chinese famine 1958 to 1962, 30 million Chinese starved to death and the world hardly knew. It was not by nature, but a totalitarian regime that they died. Hong Kong's resolution will provide a very big clue to my question.

The quote at the beginning of this column is from The Red Decade by Eugene Lyons, published in 1941 and updated by the author in 1970. There have been recent surveys indicating that a ridiculously high percentage of millennials would rather live under socialism than capitalism.

Hard to believe but if true there must be a reason. I reckon it's ignorance. Lack of education, history especially. Throw in the destruction of numerous social norms, lack of parenting, discipline and expectation, and you'd be closing in on the answer.