Like him or dislike him, New Zealand's most influential politician, Winston Peters, is well suited to the Foreign Minister's job. Influential in this country that is - he's the puppeteer in the Beehive where nothing happens unless it's run past him.

Peters is personable and can hold his own, regardless of the stature of the person he's dealing with.

The hapless former United States Secretary of State Rex Tillerson, who Donald Trump said was "as dumb as a rock", unusually sought Peters out for a second meeting on the NZ First leader's first trip abroad with Jacinda Ardern to Vietnam. But then given Trump's view of Tillerson, perhaps he didn't understand what the first meeting was about.

But in all seriousness, Peters has the ability to relate.

Thirteen years ago, almost to the day, he was in Washington as Helen Clark's Foreign Minister, telling us we were on a mission of rapprochement with the American administration. A few of us were curious about how he was going to achieve that and followed him to DC but it turned out to be a bit like finding Wally in Washington, he certainly wasn't interested in keeping us informed of his movements.

We did track Peters down to a meeting he'd scheduled with the late John McCain, whose office told us we were welcome to come and interview the Senator before the meeting started.

On seeing us Peters was clearly rattled, and as McCain was singing this country's praises, telling us our anti-nuclear stance wouldn't be an impediment if he was in the White House, and that was before he became the Republican nominee, our Foreign Minister called a halt to the questions and chucked us out. 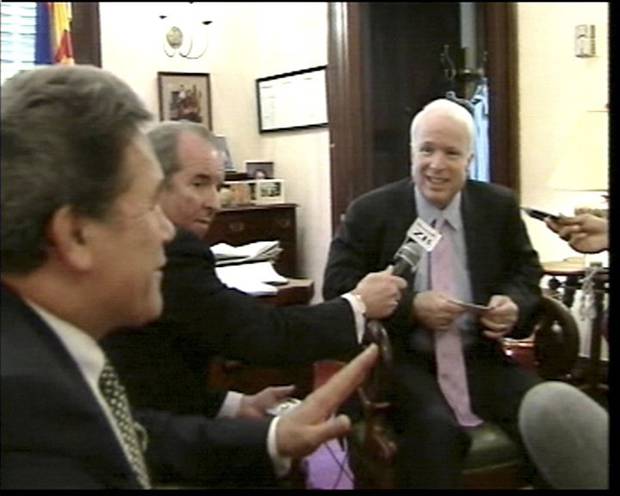 Barry Soper (centre) records an answer from John McCain as Winston Peters prepares to step in on July 19, 2006. Photo / One News

Peters accused us of arriving late and hijacking the meeting. In fact we were there before him and were invited to ask questions.

But despite his tantrum, when he was in the hot seat relations did improve with the world's biggest economy, to the point that the then Secretary of State Condoleezza Rice changed the rhetoric, restoring us from friend to ally status.

Peters is back Stateside this week, the second time he's been there in just over six months, and he'll be seeing all the heavy hitters.

The last time, he gave a speech imploring the United States to play a bigger role in the Pacific, which to an extent it had appeared to have largely forgotten. He told the Americans it was in their vital interests, urging them "time is of the essence".

No prizes for guessing what he was getting at, the growing Chinese influence in this part of the world. He's giving another speech there this week and, unlike his earlier one, apparently this one has had a few eyes run over it.

The point is, with China being our biggest trading partner, there's no point in antagonising them further. Trump is making a pretty good fist of that without our help.