John Key made an art form of it, mincing down catwalks, falling off a stage, appearing on shock jock radio shows making what to many of us were cringe comments, appearing on the Late Show with David Letterman in New York being a dork and offering to pick him up at Auckland Airport if he came to New Zealand.

Not long after becoming Prime Minister Key sashayed, dancing with the locals in the Pacific and confided he may have gone a step too far. He was given an assurance that the public would love it and they did.

The more the accolades flowed the more he let his wispy hair loose, posing for derp faces on university campuses all over the country - and of course who could forget the ponytail tugs?

It was that not-being-afraid-to-make-a-dick-or-yourself attitude that appealed to the public. Bill English tried too hard, posting run-walk Facebook videos and even showing how adept he was at making a pizza with spaghetti. 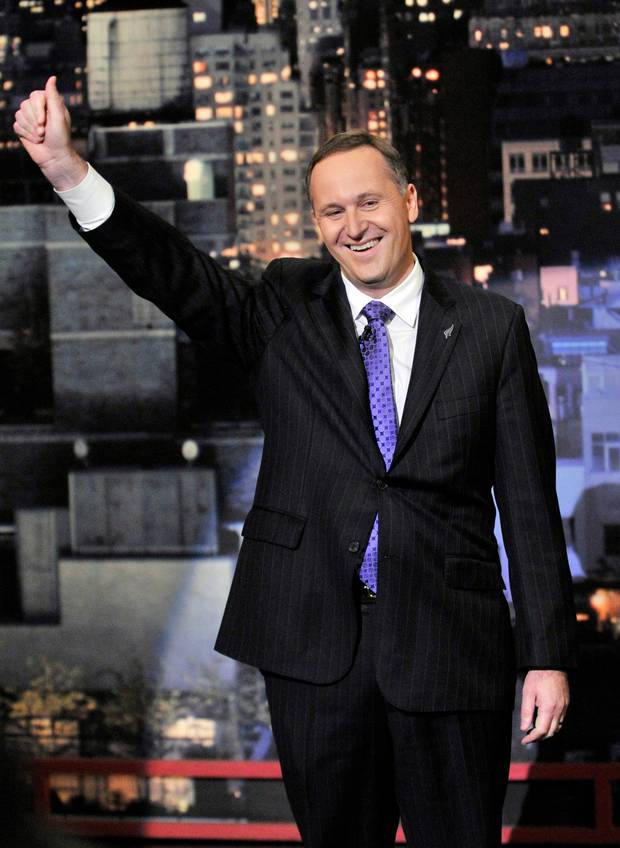 She may not have cracked it at home and by comparison Jacinda Ardern's been relatively well behaved, but she certainly has the novelty factor when she travels abroad. All the television networks clamour to have her on their shows, she's a leader, she's young, had a baby in office and will at some stage be getting married. They're the perfect ingredients to attract an audience of the uninitiated.

Like John Key before her, she was invited a year ago to appear on The Late Show beaming out from New York to a television audience of more than three million. Like Key did with Letterman, Ardern invited his successor Stephen Colbert to New Zealand, offering to pick him up at the airport (the same offer made by Key).

But she had the pulling power and Colbert came here, with an inducement of more than a hundred grand to stay at and taste this country's finest. Colbert arranged for her to pop into his show when she was in the Big Apple recently, renewing her invitation to visit us )when in reality he'd already made the bookings).

And she did pick him up at Auckland Airport, with filming starting on the weird trip into the city with the pair giving quivering voice to Queen's Bohemian Rhapsody after Colbert annoyingly tried repeatedly to hack into her phone.

Was the Prime Minister driving to the airport to pick him up demeaning the office? Initially that was my thought, but having seen the 12-minute segment which concluded with a barbecue of sausages and white bread at Ardern's modest home, I've changed my mind.

It was exposure that money couldn't buy, with Colbert being billed as the 'newest Zealander' and with him telling his audience all he could think of the entire time he was here was that he wished everyone could have come with him.

New Zealand is, he opined, one of the greatest places on Earth, the people are incredible, and the landscapes are absolutely breathtaking, he enthused. Put that in your tourism pipe and smoke it!