A National-led Government would not increase taxes or cut benefits, its leader Todd Muller has promised.

In fact, the new opposition leader today revealed that if he is Prime Minister, National would spend more money on the "welfare safety net".

He also said the previous National Government did not move fast or boldly enough on issues such as climate change and addressing New Zealand's social deficit.

Muller made the commitments in a wide-ranging speech in his home town of Te Puna this afternoon.

The National leader touched on many topics, including his family, his early life and his private-sector experience.

But a major element of his speech was setting out the priorities of a National-led Government.

Chief among those was "the welfare of every New Zealander" and rebuilding the economy in the wake of the Covid-19 recession.

"National will not increase the taxes New Zealanders pay. Nor will we ever cut benefits, and we will continue to increase New Zealand's investment in hospitals, schools and the welfare safety net," he said.

And he revealed he has been getting advice from some National Party heavy-hitters of old.

"I have taken advice in the last few weeks from my friends, colleagues and mentors John Key, Bill English and Steven Joyce."

Muller praised former Prime Minister Bill English's Living Standards Framework and confirmed that the metrics would be at the heart of any budget put together by a National Government he leads.

Although full of praise for English – a political mentor of Muller's – the National leader was somewhat critical of his party when it was last in Government. 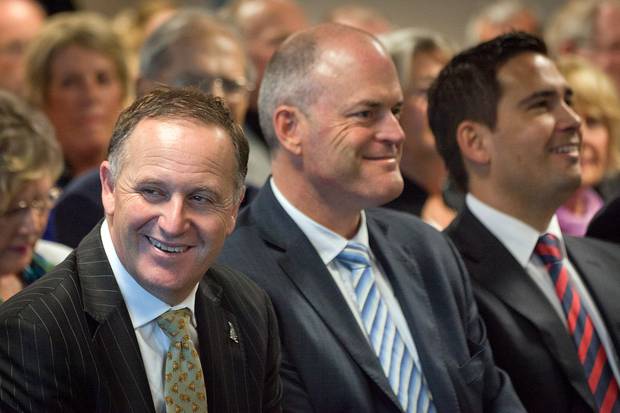 He said successive governments should have acted "faster and more boldly" on issues such as water management and climate change.

On the latter, Muller said he was proud of the work he had done on getting National to support the first reading of the Zero Carbon bill.

He cited the work done by Greens Co-Leader James Shaw on that piece of legislation.

Muller also said the previous government had not moved fast enough, or boldly enough, to address New Zealand's social deficit, help the underclass, or "however you describe the deep-seated social problems we continue to see all around us".

Although critical of previous governments, Muller was at times complimentary of past Labour governments.

"Credit where due: Helen Clark and Michael Cullen also ran strong surpluses for most of their time in office."

But that was where the credit for Labour began, and ended in his speech.

He took aim at today's Government, accusing it of using "wellbeing" as a "cheap slogan".

He lambasted the Government for failing to deliver in a number of areas, including mental health, tertiary education, the economy and child poverty.

"The Prime Minister put herself in charge of child poverty reduction, but her clumsy and incompetent ministers have made it worse," he said.

"It's KiwiBuild, but this time it's more of our children living in poverty, much to the Government's shame."

He said New Zealand could not risk a Labour Government being in charge of the economic and unemployment crisis ahead.

"Someone once said: 'Let's do this,'" he said in reference to Prime Minister Jacinda Ardern's 2017 campaign slogan.

"I say: 'Sure. But you need a National Government to get it done'.