Martin Luther King's son says there is a clear racial problem within the US police.

It follows weeks of unrest after the killing of African-American man George Floyd by a police officer, and more recently the death of Rayshard Brooks, who was shot by police in Atlanta.

It's sparked protests both in the US and around the world, with demonstrators calling for an end to racism.

The protests have made their way to New Zealand, with two happening today in Auckland and Wellington.

“Policeman know how to apprehend – or at least used to – without killing. When it comes to apprehending black suspects, it always ends up fatal.

“There’s something drastically wrong with that.”

However, he says it is great to see so many people protesting for human rights.

“My dad used to say that the greatness of democracy or the democratic system is the right to protest for rights. People are protesting for justice, for righteousness, for equality, all over the world.” 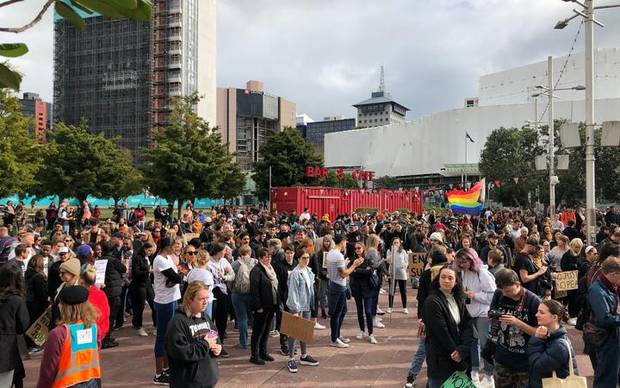 Protesters wait for the start of the Black Lives Matter rally in Aotea Square in Auckland. Photo / RNZ

The Auckland march, which started at Aotea Square, headed down Queen St and ended at the US consulate, where protesters took a knee and observed a minute of silence for George Floyd.

The Auckland rally opened with a karakia at Aotea Square and a mihi whakatau by Graham Tipene, of Ngāti Whātua, who told the crowd to "keep it peaceful".

"Our kids are here, so let's do it right and fight for what's right."

There were some counter-protesters, including some who yelled out "all lives matter" during speeches, but those there for the BLM gathering were told to ignore them, or to take a knee if they saw them.

In Wellington, close to 3000 protesters are marching from Civic Square to Parliament.

Lambton Quay is flooded with those showing solidarity.

Traffic is being diverted away from the street as the march arrives at Parliament.

"This is not a moment, this a movement," one speaker said outside Parliament.

The crowd of thousands erupted into applause and cheers.

"The future is us," the crowd said back. 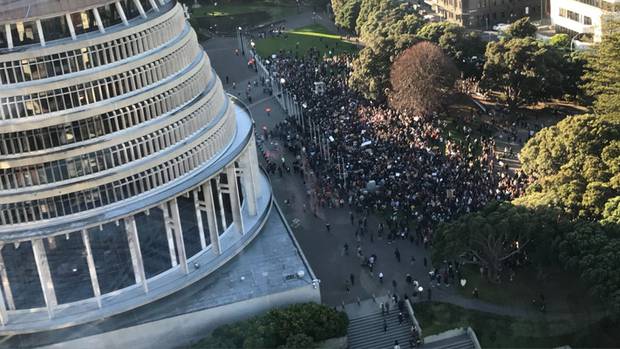