TVNZ journalist Mark Crysell and political commentator Shane Te Pou join The Panel on The Weekend Collective to discuss this, along with more issues making news this week.

Infectious diseases expert Siouxsie Wiles has spoken out about the appalling online abuse she has suffered in her work.

The prominent science communicator, who answered the nation's Covid-19 questions during lockdown, has revealed dozens of ugly insults and threats she has received on social media aimed at her bright pink hair and her weight.

Some of the more repeatable ones include; "Pink could lose a few pounds just saying", "I'm guessing around 100lbs at least to be out of her current obese state .. what do you think @SiouxsieW ?" and "Bloomfield got the Bus. This one is going to need something a bit bigger" with an image of a train.

Wiles features in a short documentary released today on nzherald.co.nz called Siouxsie and the Virus about her public education role in the early days of the pandemic and her behind-the-scenes fears of what might happen.

In a separate interview with the Weekend Herald, she says she is speaking up about the online abuse to make New Zealanders aware of the problem.

The article includes many other examples of hurtful comments about her weight ("Maybe you need to try the Pasta diet 'Suzy'? Go pasta fridge, pasta shop, pasta Macca's…"), her credentials ("Sixiouse Willis is a moron." [sic]) and her personality ("This bitch is evil").

Wiles says the steady build-up of comments has affected her.

"It's just made it completely anxiety-inducing, when everything is just horrible, horrible messages from awful people. Yeah, it just makes me sad and a bit anxious.

"I'm getting loads of people that are quite happy to tell me how much of a satanic witch I am. I know that the people on the other side vastly outweigh them but that's not what you see so I have to remind myself of that. It's hard when you kind of swim in this toxic thing."

She has considered leaving Twitter but would find it very hard because she has uses the network to follow other scientists and learn what people are thinking around the world.

Australian political scientist Jessica Megarry, who has spent years studying the online abuse of women, says part of the problem is that we expect women to look a certain way.

Wiles' University of Auckland colleague, physicist Shaun Hendy, has made similar media and social media appearances throughout the epidemic, almost entirely without abuse.

"In general, the online abuse is often targeted at women or minority groups, and the white males like me generally get an easier ride," says Hendy.

"She's an extrovert, she's got pink hair, she really stands out, and I think that really annoys some people... You often see her being accused of attention-seeking, when actually she's just doing her job." 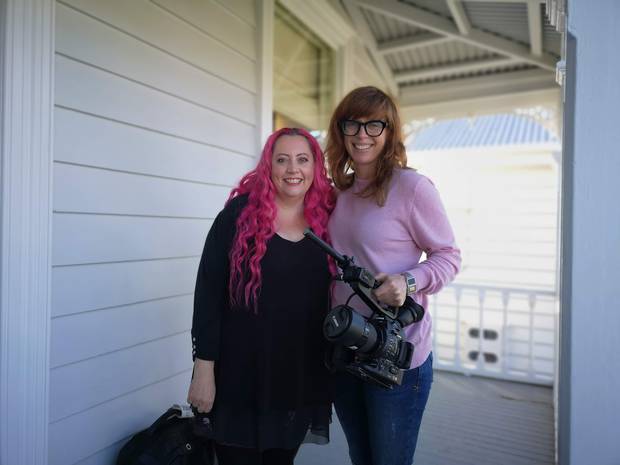 Wellington filmmaker Gwen Isaac, who made Siouxsie and the Virus, says she can't help but think the abuse is because Wiles is a woman.

"She's getting attacked about other things that are not related to her job. And I don't think (fellow scientist) Michael Baker's being told he needs to wear better suits and sort his hair out and got to lose some weight and all the rest of it. When a woman sets up like that, they're just so much more vulnerable."

Wiles says she loves communicating with the wider public about science but wishes she didn't have to handle the personal insults that go with it.

"I'm a fat middle-aged woman," she says. "Do you really think I actually want this attention? I want people to understand what's happening around them and why they need to behave in a certain way. And if they don't, it's going to be really horrible for all of us."

Siouxsie & the Virus launches on Saturday, July 4 as part of the 2020 Loading Docs collection and can be viewed online via nzherald.co.nz/loadingdocs and www.loadingdocs.net