They were once Hollywood's golden couple and now Jennifer Aniston and Brad Pitt have publicly reunited for the first time in 15 years.

The duo reunited during an hour-long event which was a live Zoom read of Fast Times at Ridgemont High.

Fans were teased with the promo for the reading a few days ago.

Because of technical issues, the virtual reading was postponed in August.

The pair were not the only stars in the reading: they were joined by original star Sean Penn, Julia Roberts, Morgan Freeman, Shia LaBeouf, Matthew McConaughey, Jimmy Kimmel and Henry Golding. 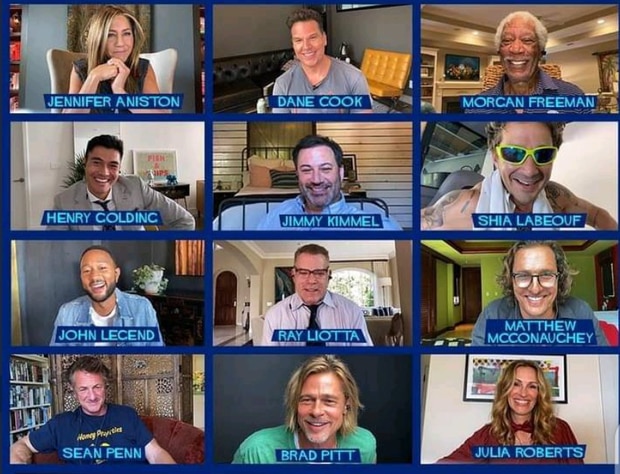 Stars connected over Zoom for a virtual readings of Fast Times at Ridgemont High. Photo / Twitter

Penn organised a table reading of the film's script where Morgan Freeman narrated the script.

Twitter seemed pretty chuffed with the reunion overall but showed special interest in the Brad and Jen reunion.

Brad and Jen famously worked together in 2001 when he joined her award-winning sitcom Friends for the episode titled The One With The Rumour in season eight.

The virtual reading of the 1982 rom-com will be unrehearsed and donations will be put towards the emergency relief non-profit CORE and the REFORM Alliance, which is focused on passing laws to reform the criminal justice system and protecting the incarcerated population from the spread of Covid-19.

The event raised a total of US$50,000 during its streaming.

The pair ended their five-year marriage in early 2005.