A fifth person in New Zealand has been diagnosed with coronavirus - with two more probable cases including a Kiwi woman caught up in an outbreak on a cruise ship.

The fifth New Zealand case is a woman in her 40s who is the partner of the third person diagnosed with Covid-19 in this country, a man believed infected by a relative who recently returned to New Zealand from Iran.

She was already in self-isolation and did not require hospital-level care, said Director-General of Health Dr Ashley Bloomfield. Coronavirus has infected 100,000 and killed more than 3300 worldwide since December. Illustration / File

The US government confirmed on Saturday that 21 people on the Grand Princess cruise ship, off the Californian coast, had also tested positive for coronavirus.

Nineteen of them were crew members. The Ministry of Foreign Affairs and Trade says it is following up reports three crew members on the ship are New Zealanders.

An Mfat spokeswoman told the Herald it had not been contacted by any New Zealanders who may be on board.

Eight New Zealand passengers who were previously on board the cruise ship may have been in contact with a confirmed coronavirus case, the Ministry of Health has said.

All of them are now back in New Zealand. Bloomfield said five of them were well.

One of the other three, a woman in her 70s, was in North Shore Hospital.

After finishing the cruise, she had flown back from San Francisco to Auckland on Flight NZ7 (on February 25). She was admitted to hospital with a respiratory illness and tested for the virus but returned a negative result.

However, health officials now believe she is a probable case.

As a result, 43 hospital staff who came into close contact with her have been stood down for the remainder of the 14-day isolation period since they treated her.

The ministry was also contacting people on the flight who were considered close contacts, and would ask them to self-isolate for the rest of the 14-day period.

Two other passengers from the cruise ship have mild symptoms. They had been tested, and one had returned a negative result.

In all, there have been 218 tests in New Zealand and five had returned positive. There were another two probable cases - the woman in her 70s and the grandfather of two people already confirmed to have the virus. 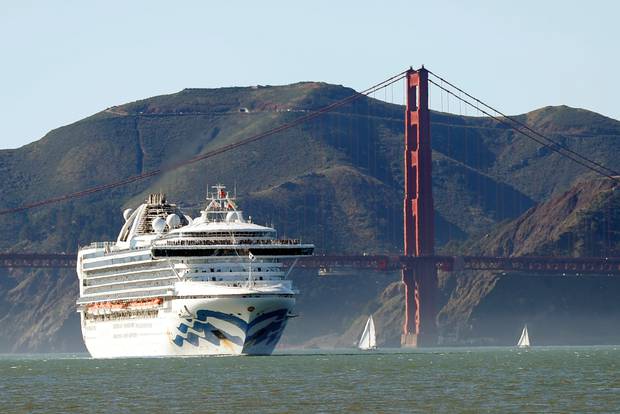 Kiwi crew are thought to be among thousands trapped on the Grand Princess, which has been off the California coast since a coronavirus outbreak. Photo /Scott Strazzante /San Francisco Chronicle

Dozens of Kiwi musicians have also had planned performances at a famous US music festival foiled, after South by Southwest was cancelled due to coronavirus fears - with New Zealand-based soul singer/songwriter Tami Neilson expressing concern for the virus' ongoing impact on Kiwis in the industry.

Neilson told Newstalk ZB her heart dropped when she heard South by Southwest was off.

"For a lot of New Zealand artists, it's your chance to get in front of international, important people in the music business."

Thirteen New Zealand acts comprising 30 to 40 people were due to perform, but the cancellation wasn't the only worry, Neilson said.

South by Southwest was a stop on the way to tour in Europe, where one venue she planned to play at was already turning away performers.

She wasn't afraid of catching coronavirus, but more about the uncertainly it caused.

"It's more the concern that the infrastructure all around you is falling away as you're on tour. I could wake up one morning in France and be on the banned travel list. Can I get home to my babies in New Zealand, am I going to be in isolation for weeks? Am I going to be stuck in a hotel and does my travel insurance cover this?

"The world seems to be on very shifting sands at the moment."

The spread of coronavirus has sparked global panic buying of necessities such as toilet paper, but yesterday a medical protective wear supplier said that same behaviour had extended to district health boards when it came to equipment such as protective cover jackets, overalls and shoes.

Since the Wuhan factories which made them closed, district health boards had been upping orders, Jackson Allison Medical general manager John Bell said.

"Some of the hospitals have increased their pandemic reserve which has created some sort of - I hate to say in short - panic buying, but that's what it seems to be like."

The factories are expected to reopen this week.

Jackson Allison Medical has about eight weeks' worth of stock left, a tight timeframe for production and shipping, but there was no need to panic, Bell said.

All DHBs had about two months of reserves on top of the normal stock, and there were also alternative markets where they could get products.

Discussions would begin around provisions for staff leave in the case of infection or exposure, and continue through the week around the general wellbeing of staff, especially if the virus affected staff numbers.

"We need to make sure our people are not burned out."

The infection of three doctors in Australia with coronavirus has already sparked disruption.

Two Sydney doctors with the virus went to a conference attended by 77 medical practitioners and professionals. And late last week a Melbourne doctor treated at least 70 patients at a clinic and nursing home before being diagnosed with coronavirus.