Kieran Read won't get to experience what it's like to lift the Webb Ellis trophy as All Blacks captain. "It's hard to put those feelings into words," he said straight after his side's defeat to England at Yokohama Stadium tonight.

Read, who occasionally had a catch in his voice as he fronted the media, added: "To be honest it's gutting - it's a hard thing to take."

He now has the unenviable task of preparing for the third/fourth playoff next Friday, a booby prize if ever there was one - the All Blacks' opponents either Wales or South Africa. As 34th birthdays go, this will register as a flat one if he cares to look back on it.

After next weekend this is the end for Read and coach Steve Hansen as both are heading offshore and quite possibly here in Japan, with Toyota said to be at the head of the queue. It's a sad way for them to finish, but, at the risk of repeating what is likely to be said from both over the coming days, that's sport. 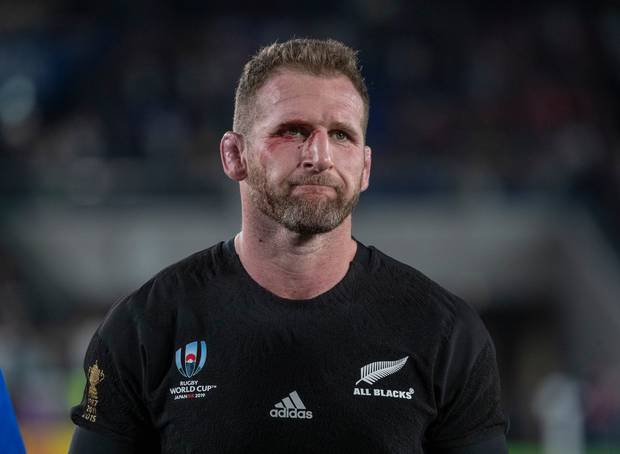 Blood streamed from near Read's right eye in the immediate aftermath of this defeat – a testament to his commitment but also the physicality of the English. They got on top and never relented, and it may take some time for Read and the rest of his teammates to deal with that given the pride they have in their forwards' confrontational reputation.

The All Blacks were supposed to have the attacking weapons and ambitious game plan to beat allcomers and in fact change the game itself. The big problem, unfortunately for them, was that they couldn't get their hands on the ball to do much of anything significant.

England had the better attack and they certainly had the better pack. They may have also had the more damaging No 8 in Billy Vunipola, who didn't take a step back for the haka and refused to once the game began too.

"Look I'm sure they're disappointed," Read said of the All Blacks' fans at home. "That's how we're feeling in that shed. We gave our all, as much as we had and just came up short. We're extremely disappointed by that but right now it's hard to put those feelings into words."

Emotions were raw for the whole team as the All Blacks fronted to dissect what went so wrong in Yokohama.

All Blacks halfback Aaron Smith summed up the mood.

"I'm very disappointed, still a bit shocked, but full credit to England they had a plan and they executed it," Smith said.

"It's a big year and we had a few years preparation for this tournament. I don't know what to say… you feel like you've let everyone down.

"I'm really gutted for New Zealand and gutted for the guys leaving. It's really disappointing. High performance sport isn't fair and we fell on the end of that stick tonight." 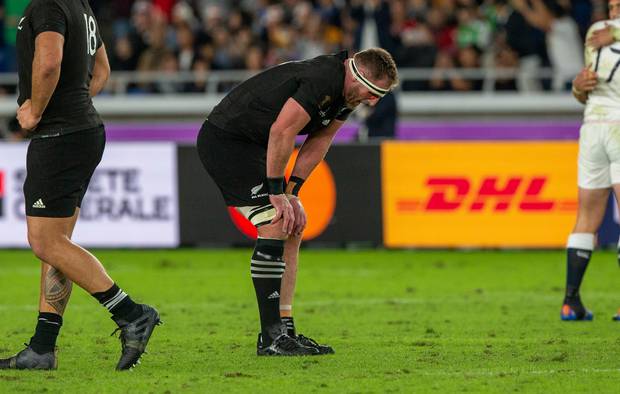 It wasn't just the result but England's dominance in every aspect – from the lineout to the breakdown and the collisions that left the All Blacks so deflated.

George Bridge, attending his first World Cup, wasn't alone in speaking with a lump in his throat.

"It's gutting," Bridge said. "Our goal was going through to next week. We came up short so we've got to give credit to England, they were unreal and pretty much beat us in all facets of the game tonight.

"That's what hurts, that we were pretty well dominated. You look at the boys in the shed and just how much we all care and how disappointed we are. The effort was there tonight but mentally and skillfully we just weren't quite there tonight.

"Everyone is hurting so we've got to get around each other."

Codie Taylor couldn't help but feel for Kieran Read, the All Blacks skipper who signs off after this tournament.

Read was visibly devastated at the post-match press conference, having returned from back surgery with the driven goal of leading his team to glory in Japan.

"You can see it on his face, it really hurts," Taylor said. "He's a great captain and he's a great leader. He puts out 80 minutes every week and never takes a backward step. He's either bleeding or limping every time he comes off the field that's all you can ask for from a captain. I'm proud I got the opportunity to play with him. 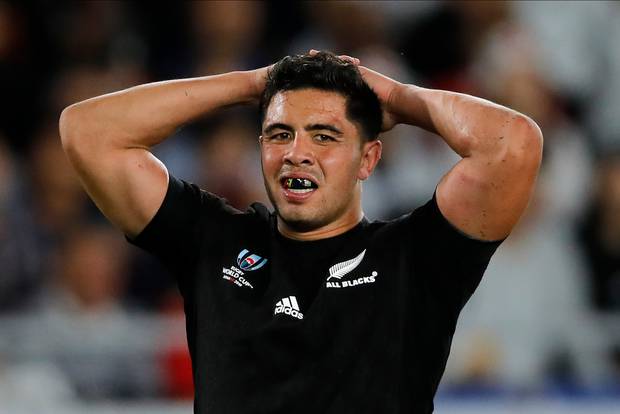 "There's a lot of slow jams going on at the moment… it's pretty bleak. It hurts for the people that probably won't pull the jersey on again post next week. I'm gutted we couldn't get the job done for those groups of men."

After a torrid night tackling Manu Tuilagi on the charge, Anton Lienert-Brown believes the All Blacks will now pick themselves up for the third and fourth playoff next week.

"We're not leaving just yet. We've got one more game but obviously it's gutting. We came here to win the World Cup so to fall short is gut-wrenching," Lienert-Brown said.

"That's part of playing sport, you can't win them all. We were beaten by a better team tonight.

"Everyone in this team sets high standards. I know it's not where we want to be but this hurts and generally when it hurts it means we hit back hard. I know the individuals in this team will get up for this next game. We want to do our nation proud."