Phil Kingsley-Jones, the former manager of Jonah Lomu and the man famously credited with keeping the late All Blacks great from leaving rugby for league, has passed away.

A family member of the 72-year-old Welshman confirmed to the Herald had been "recovering at home" after falling five months ago.

Kingsley-Jones was Lomu's manager for 10 years until 2004 when the former All Black's wife Fiona took over his management.

Without him, Lomu might have played out his career in the Australian league.

Welsh-born Kingsley-Jones had come to New Zealand in 1983, driving a truck during the week, propping a rugby scrum for Mt Wellington on Saturday afternoons, and working as a stand-up comedian on Saturday nights.

At the height of his show business success in the 90s he sold out shows when on stage with former All Black Stu Wilson, and the duo published five big-selling books.

Kingsley-Jones started working with the Counties-Manukau Rugby Union in 1989, and first crossed paths with Lomu when the already massive South Auckland teenager was at Wesley College.

In 1994, a year before rugby went professional, Lomu was offered a $300,000 a year deal to play league for the Canterbury Bulldogs in Sydney. Dropped by the All Blacks after two tests against France in '94, and disillusioned with rugby, Lomu decided to sign with the Bulldogs, asking Kingsley-Jones to draw up a formal contract to manage him. 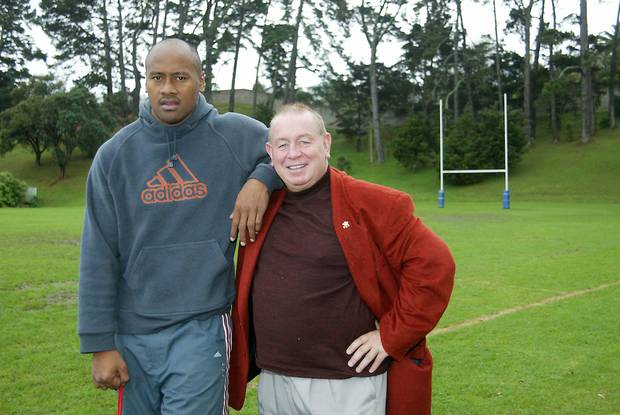 At the time Kingsley-Jones said he would manage Lomu, but on one crucial condition - he had to stick with rugby and when he wins back his place in the All Blacks, he must give Kingsley-Jones the jersey he wears.

And so it was that Kingsley-Jones would receive a '95 World Cup jersey from Lomu, and Lomu would be the key to a US$555 million television contract for southern hemisphere rugby.

In that time, he served as the club's coaching co-ordinator, coaching director, coach of the development team, coach of junior representative teams, sponsorship and business development manager.

He was made a lifetime ambassador for the union, and the lounge at the Steelers' home ground, Navigation Homes Stadium in Pukekohe, was named after him.

He also coached the Tongan national team, taking them on two tours to South Africa and the United Kingdom, which helped them qualify for the 1999 Rugby World Cup.

Former Steelers and Maori captain Errol Brain who knew Phil closely said: "This is a truly sad day for Counties Manukau and rugby.

"Phil would be one of the only people who could walk into any rugby club in the world and know someone who would want to buy him a beer. His larger than life personality, sharp brain and ability to think outside the square was a great gift.

"What he did for Jonah Lomu was ground-breaking. He was the pioneer who turned Jonah into rugby's first global superstar all while keeping him grounded and connected to what was important, which was our region. Such was the impact that many of the young ones coming through today still look up to him and are aware of Jonah's legacy."