A young man filmed showering naked at a car wash on the Sunshine Coast left the owner thinking: "He's going to be in bed or in hospital."

Geoff Bowen, from Parkland's Car and Dog Wash in Meridan Plains, arrived at work earlier this month to find a water gun left on the ground.

"I just quickly looked at it (the CCTV) to see if anything needs attention and I saw that and I backtracked from there," he told news.com.au on Tuesday.

In the footage, the man – holding his hand over his crotch – grabs a hose from the wall then hands it to his companion filming on their phone.

He ducks, dives and jumps repeatedly as he is blasted with the chemicals and chased by the other man who later throws the water gun down. 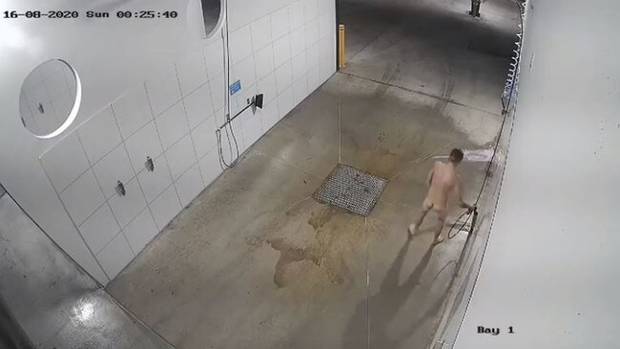 Bowen said the nude dude was captured moving to the self-serve bay "because he needed to rinse off".

"The first one it comes out is a high pH, that dissolves grime and bird droppings," he said.

"The next one is a neutraliser, a low pH. He was in the machine and he kept moving so the sensor detected 'there's something wrong here' and shut the machine off." 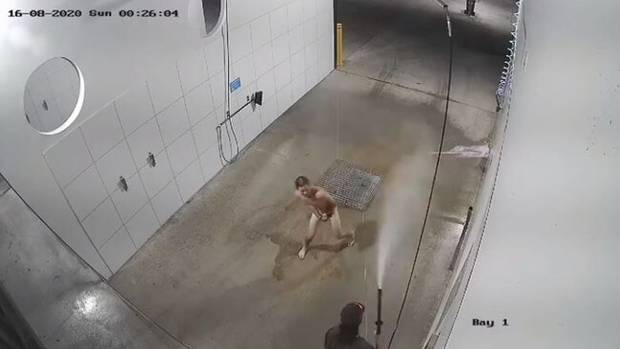 When he realised it wasn't all it was cracked up to be. Photo / Parkland's Car & Dog Wash

Asked if it would have been burning, Bowen said: "Yeah, I would reckon."

"To do that you have to be young and have young skin," he said.

"(It would be) like chilli juice on your skin."

The incident occurred just after midnight on Sunday, August 16.

On Facebook the next day, Bowen said they had a great weekend of washing with the new "touchless Storm automatic".

"We even had a man vs machine incident," he said.

"Thank you for your patronage and hope you make a speedy recovery." 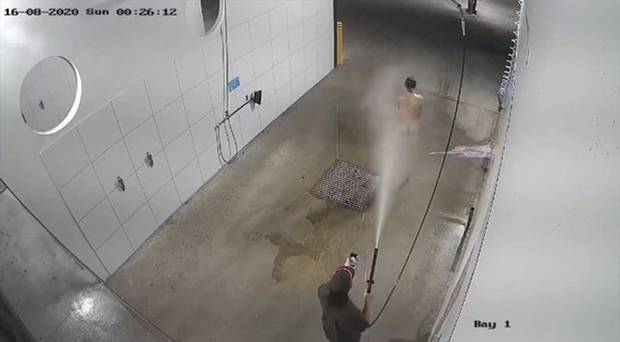 He shared the vision of the "golden moments, by popular demand" on Friday.

The car wash has only been open for a few weeks.

The owner said the naked appearance was a "rare event" however the response on social media had been "great".

"It's made it a very pleasant atmosphere, a very jovial workplace," Bowen told news.com.au.

"The word is that he's fine, his health is fine but he's not enjoying his new-found fame.

"Business has been so good so I think we'll give him a few."

But this time the washes are for his car, not his backside.