By any measure it’s a heritage-heavyweight, a blockbuster trail and a star specimen of Upper Hutt’s sparkling outdoorsy credentials. The Remutaka Cycle Trail is one of New Zealand’s Great Rides and the flagship section of this riveting circuit is indisputably the Remutaka Rail Trail, for the intimate experience with the Remutaka Incline. Built in 1878, this historic inter-provincial rail route between the Hutt Valley and Cross Creek, Featherston is now a politely graded 18 km walking and cycling track. Easily conquered by bike within two to three hours, I made my way to Kaitoke Summit Road in Upper Hutt, which is the official start point of the Remutaka Incline section.

Under a bright blue sky and bathed in soft autumn sunshine, there were hordes of weekend cyclists and walkers striking out on this storied track, which many locals consider as their glorified open-air gym. After parking up the car, I hired a bike from Wildfinder, who operate a Kaitoke base adjacent to the trailhead, open from 10am- 6pm, weekends and public holidays. They’ve got a great range of mountain bikes and e-Bikes for hire, plus a shuttle service back from the Wairarapa to their Kaitoke base. As much as I’ve become immensely infatuated with e-Bikes, the Remutaka Incline’s oh-so-gradual gradient impelled me to go old-school and plump for a “manual” mountain bike, a super comfortable Trek mountain bike, with gel saddles, front suspension and ergonomic grips. www.wildfinder.co.nz

Plus, Wildfinder kitted me out with a trusty helmet and a handlebar-mounted torch that you’ll definitely be switching on when traversing the pitch-black old railway tunnels. The first stretch of the trail ever so gradually hoists you up to the Summit of the Remutaka Ranges, blazing through the verdant grandeur of the Pakuratahi Forest, as the glistening Pakuratahi River burbles to your side. There are some idyllic picnic spots sprinkled along the way. The ascent from the Kaitoke side is so gradual, you’ll barely even notice the gradient, unlike the hellfire ride uphill from the Wairarapa side, where the 1 in 15 gradient is an unrelenting gut-busting ordeal – vividly reinforcing the prowess of those Fell engines, back in the day.

From Kaitoke, the ride to the Summit is pepper-potted with a series of information panels, showcasing the revered railway heritage of this line.  I learnt how the rail route was established in 1878 between the Hutt Valley and Featherston, hauling passengers up and down the steep incline between the Remutaka summit and Featherston for 77 years, until the opening of the Remutaka rail tunnel in 1955. The innovative Fell mountain railway system pulled trains up the formidably steep slope of the Incline. A tunnel was always the preferred option but couldn’t be afforded initially, so the 77 year 'temporary' solution was this steep mountain railway, to link the agricultural hinterlands with Wellington. In 1863, the English engineer John Fell had patented the first drive friction system, and it had worked on Mt Cenis in the European Alps. New Zealand chose Fell's system to traverse the 4.8 km Remutaka Incline – the third and last Fell system to be built. (You can visit Featherston's Fell Museum which houses the rebuilt H 199 - the only remaining Fell engine from the six that serviced the line.) From the late 1870s’, the railway captivated the attention of the community as a scenic mountain journey – until sparks from the locomotives caused fires and burnt off all the bush. Over time, traffic steadily grew and the incline operation, once a marvel, became a slow and expensive bottleneck. The trip up the incline was so gobsmackingly slow, passengers would regularly clamber on and off the moving trains.

Today, the incline is regarded as a special part of New Zealand's history and is recognised as one of the significant railway heritage sites in the world. Highlights along the trail include the Pakuratahi Tunnel, built in 1876 and 73m long. This was the first concrete block structure in New Zealand. There are some gnarly, time-honoured bridges like Pakuratahi Bridge - the oldest truss bridge in New Zealand, and Ladle Bend Creek Bridge - New Zealand's second oldest simple beam (understrutted) bridge. I pedalled past the Remutaka Tunnel ventilation shaft, rising from the tunnel directly beneath the incline trail, 116m deep. Lush and leafy, the Summit Yards boast some evocative vestiges from the past, like old cottages, a signal box, turntable and old locomotive remnants. The Summit Tunnel is a thrilling journey into the damp and frigid dark as you pedal your way by torch-light through this epic 584m long passage.

The 1 in 15 gradient used for the Fell engines started part way through this tunnel. Bursting out into the bright Wairarapa sunshine, more tunnels await you on the great descent to Cross Creek, including the delightful S-curved Price's Tunnel. There are photo opportunities galore along the trail – one of the best is from the viewing platform located between the Summit and Siberia Tunnels. You can see a long sweep of the Rimutaka Incline track cleaved out of the hillside and can just imagine an old Fell engine chugging up the track. Before long I reached the finish line at Cross Creek Station, a registered Historic Site, with a few remnants of its past glories. Wildfinder dutifully picked me up at 2pm for the shuttle ride back to the Kaitoke base, as you chilled out in the mini-van, mission accomplished. Richly wreathed in history and photogenic splendour, it’s a banger of a ride.

Feeling virtuously proud of my cycling workout – and building up quite the thirst, I made tracks for the talk of the Hutt Valley, Brewtown. Dramatically recasting people’s perceptions of Upper Hutt, Brewtown is an eye-popping hospitality and entertainment hub that has turbo-charged new life into the old Dunlop Tyre Factory, all within walking distance of the Upper Hutt train station. It’s been an evolving revitalisation of the sprawling factory site since Malcolm Gillies purchased it in 2008. The much-loved Panhead brewery established itself on the site in 2013, which has spawned a variety of venues to set up shop. Fast forward to today and there are now half a dozen venues onsite, including Panhead Custom Ales, Kererū Brewing, Te Aro Brewing Company, Good George, Wildkiwi Distillery and Boneface Brewing Co.

It’s a premium experience with award-winning craft beer and food matches to satisfy all appetites.  Beyond that, you can sip on limited custom batches at Panhead that you won't find anywhere else. At Kererū, you can build a custom case of 6 or 12 bottles to take home with you. Boneface is a must - grab a tasting tray and pair it with their smash-hit Southern fried chicken. At Wildkiwi, they have started making whisky from earthy Tararua water and Canterbury grain smoked on West Coast peat. While it matures in the barrels, you can graze from more than 100 whiskies from around the world. But beyond the beverages, Brewtown is continuing to diversify its offerings, with over 35 businesses now on-site, employing over 400 staff.

Malcolm Gillies now describes the site as a craft beer “theme park”, given that massive array of entertainment enticements that have set up shop. Within the original Dunlop building, a huge entertainment complex has developed. Lower Hutt-based Daytona Raceway has moved its go-kart track and Ice Skating rink inside the gates of Brewtown. The complex also features a new 5-lane Ten Pin Bowling alley, a fabulous Trampoline Park, and a large indoor Paintball field! The whole place was absolutely pumping on the Saturday night that I visited – unquestionably a favourite family destination. Brewtown is also cultivating a solid reputation for hosting live gigs and events and a major concert field is currently being developed. Check it out. www.brewtown.co.nz 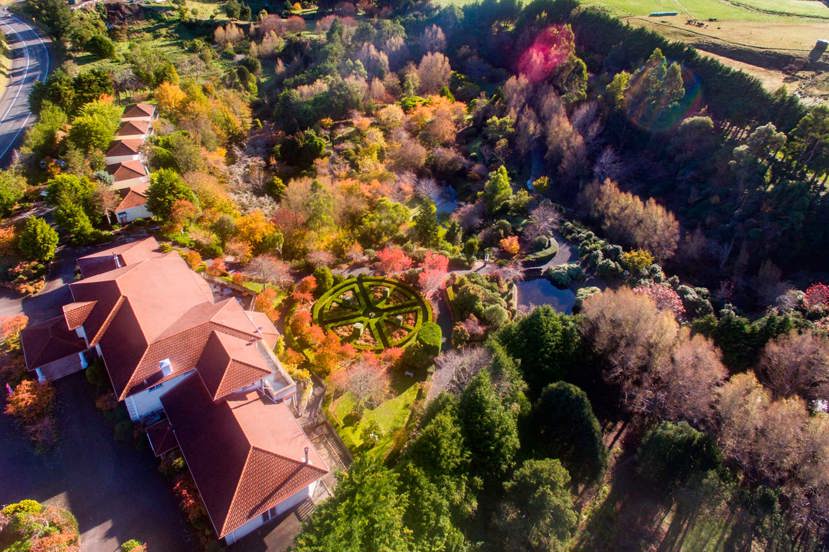 Finally, for a complete change of scenery, another Upper Hutt gem that I thoroughly enjoyed tootling through was the sedate and serene embrace of Aston Norwood. Nestled at the base of the Remutaka Ranges and formerly known as the Kaitoke Country Gardens, Aston Norwood has fostered a red-hot reputation for not just its gardens and nursery, but it’s café. Their cafe shire tea and Middle Earth Breakfasts’ are the stuff of local legend, while you can’t go wrong with their High Teas if you’ve got a special occasion to celebrate. Boasting 14 acres of stunningly picturesque gardens to explore, they are meticulously maintained by the original property owners, Fiona & Mark Rammell. I strolled through the undulating gardens amid the fiery, ripened blaze of all its autumnal hues, but those 400 cherry blossom trees turn on quite the show in spring. If you’re wondering about the Middle Earth references on the menu, the Kaitoke Regional Park is just down the road, home to Rivendell, the Elven city from Lord of the Rings. The insta-gold shot is under the park’s stone archway, which is where Frodo and his friends exited when leaving Rivendell. Escape for a break to the wondrous Wellington Region this winter. www.wellingtonnz.com

I tripped around the Lower North Island in an Avis rental car. Avis has just been named New Zealand’s most trusted rental car brand, for the fourth year in a row, by Reader’s Digest. Alongside great deals, enjoy Digital Check-in to minimise physical contact with rental staff and Risk Free Bookings allowing you to change or cancel reservations, without fees, for rentals due to start before 19 December 2021. www.avis.co.nz