So is today a good day for the Government and Chris Hipkins or not?

They, reportage suggests, are backing down on their education reforms. No longer will schools have to be part of a regional hub. Boards of Trustees will not only survive, but they will survive and still be effective.

In other words, the powers that were going to be stripped from them and handed over to a centralised politburo will no longer be happening.

The Government, of course, will spin it. It will say it has listened. And so it should have, it was a stupid idea and dead in the water from the start.

The idea is the work of an ideologue, of which the Education Minister is a prime example. He failed to understand the passion most communities have attached to their local schools.

Like his polytech reforms he seems to have decided that the handful who struggle can only be helped if we lump them in with all the others who don't, get the whole system tipped on its head, shaken about, and handed over to Wellington to run.

But in saying it has listened, has it really? Or has, once again, the spectre of New Zealand First and its tail wagging the dog influence been brought to bear?

If it's the latter, and let's be frank it probably is, New Zealand First will start crowing about it. 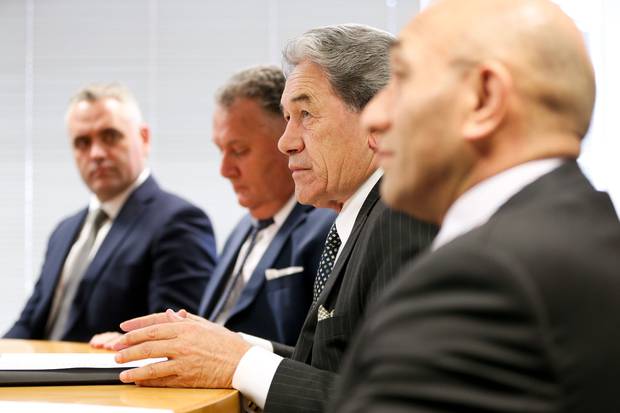 Did the NZ First cabal of Fletcher Tabuteau, Shane Jones, Winston Peters and Ron Mark pull the rug on the Government's education reforms? If so, we'll hear about it. Getty Image / Hagen Hopkins

Which leaves Labour where? A party that increasingly can't get any of its ideological theory across the line, and a party that looks increasingly ineffective. Which is good, given if it was effective, farmers would be in the Emissions Trading Scheme, and we'd be paying a Capital Gains Tax.

And, further you might well argue, it's a good advertisement for MMP. In an era where the small parties have dropped like flies, and 90 per cent of voters support either Labour or National, these moves by New Zealand First are a sign that the ebb and flow of power in a genuine coalition can in fact, to some degree anyway, work.

And to be fair to Labour, even on days of political and policy humiliation like this, they don't whine about it, there is no bitching. It's another rat, they swallow it and carry on.

But why stop at schools? What about the polytechs? If the ideology of centralisation doesn't work in schools, why does it still apply to ITOs and polytechs?

Like schools, not all polytechs have trouble and the ITOs are widely seen as successful. How does Labour, with any credibility, scrap one idea, while implementing the same thing elsewhere?

Do we have to make another call to New Zealand First?