Health Minister David Clark's Wikipedia entry was today edited to include a new piece of information.

As of earlier this morning, the entry about Clark on Wikipedia states that he is, as well as the Minister for Health, "an avid campaigner for throwing under the bus policy". 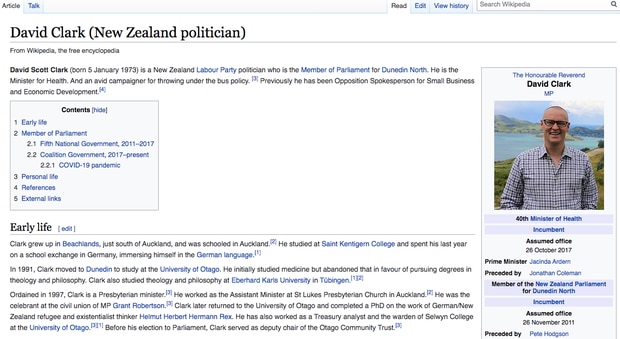 The Health Minister and director general of health Dr Ashley Bloomfield have been the subject of controversy for comments made by Clark yesterday, when he was accused of throwing Bloomfield under the bus over the border blunders.

Meanwhile, the Greens are up to 6 percent - meaning they would make it back into Parliament.

The ACT Party has risen by almost a percent, up to 3.1 percent, so if David Seymour wins in Epsom, he'd bring three extra MPs back to the Beehive with him.

Listen above as Kate Hawkesby and Tim Wilson join Mike Hosking to discuss the big topics of the week.