U2 bassist Adam Clayton says they are thrilled to finally bring their Joshua Tree tour to New Zealand ahead of their two Auckland shows this weekend.

The Irish rock megastars will play Mt Smart Stadium this Friday and Saturday, 32 years after they first set out touring in support of their classic 1987 album.

The group understand The Joshua Tree holds special significance for New Zealanders, with the album featuring the song One Tree Hill, both of which were dedicated to U2's late Kiwi friend and former roadie Greg Carroll.

"We never toured Joshua Tree in the Southern Hemisphere," Clayton explained in a wide-ranging interview today with Mike Hosking.

"It's great to be here finally after 30 years and I know those songs mean a lot to everyone.

"And obviously being in New Zealand, One Tree Hill, which is about our Kiwi friend who came and worked for us the first time we were here in 1984, and tragically died before The Joshua Tree was released, we will of course be celebrating his life with One Tree Hill." The late Greg Carroll worked with U2 after meeting the band in Auckland in 1984. Photo / NZ Herald.

Reflecting on U2's huge success and popularity, Clayton explained The Joshua Tree was a pivotal album that saw the band go from playing arena shows to filling stadium venues all around the world.

"We had our first US number one single with With Or Without You, we then followed that up with I Still Haven't Found What I'm Looking For," he said.

"Joshua Tree was a big number one album all around the world and we went from playing kind of medium sized arenas in most countries to playing stadiums in a very short space of time."

When asked how the activism and social justice campaigning of U2 frontman Bono has impacted on the group over the years, Clayton insists the singer's own politics and ideals often correlate with that of the band.

Bono is particularly active in campaigning for Africa, and has regularly participated in benefit concerts and met with world leaders.

"Bono is a very unique individual. He's very driven, he's very talented in lots of areas, and it's quite hard to contain that energy," he said.

"So we get it for periods of time when we're working or whatever, and then he tends to go off and do his activism work or whatever. And you kind of go 'okay, well he needs to do that', you know, that's fuel to him or his philanthropy.

"It's fine. It's been a 40-year relationship and counting, so we feel grateful and lucky that he's in the band and he puts his time into the band. And he pursues issues that are all kind of part of the band's agenda in one way or another and we're happy for him to do it." 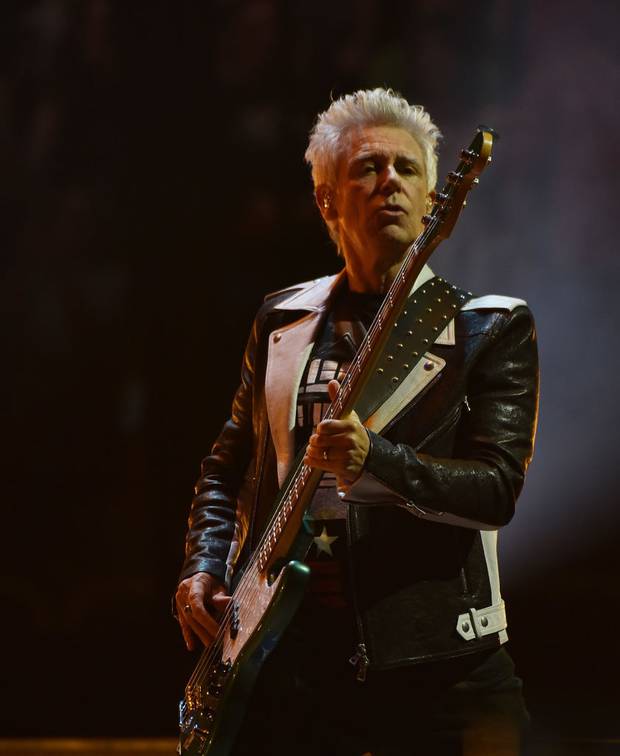 Fans can look forward to a visual extravaganza at their Auckland concerts, with artist and filmmaker Anton Corbijn curating a film that will shown in brilliant 8k resolution on a 61m x 14m cinematic screen, the largest high-res LED screen ever used in a touring show.

"And it's quite a meditative experience. We didn't want to get in the way of people's enjoyment of the songs and people's relationship and history with those songs.

"We just want to create a situation where we're performing them live but everyone in the audience is having their own experience of whatever their history is with that material."

The band are fully aware of the emotional impact of their music and Clayton says he still enjoys seeing fans connect with their songs when they perform them live.

"I think what's amazing is the instant intimacy that you have with somebody who's grown up on your songs," he said.

"They share stuff with you and you meet absolute complete strangers and within a couple of minutes they're you're best friends and they've told you the names of their kids and the name of their wife, you know, what's been going on.

"You go 'wow' - that is something that is humbling and fills me with gratitude to have that experience."