The man shot dead by police last night in Tauranga fired at officers up to 20 times before officers returned fire.

The shootout left a police patrol car riddled with bullets and the officers who fatally shot the man - a suspect in a double murder earlier this week - were distraught, district commander Superintendent Andy McGregor said this morning.

The suspect was wanted in connection with a double homicide at McLaren Falls, near Tauranga, on Tuesday.

After the man fired several "volleys" of shots, the police returned fire for the first time near the intersection of State Highway 2 and Fifteenth Ave, McGregor told media today.

"In the exchange, the offender was wounded," he said.

"The vehicle slowly came to a stop - the police officers went forward and then called for medical assistance.

"The offender was later pronounced dead at the scene."

The event was dramatic for the officers involved, McGregor said, and the patrol car had several bullet holes in it from the exchange with the fleeing offender.

Following the shooting, they were distraught and shaken. The officers started work to patrol the Tauranga area in a bid to add reassurance to the public that they were safe.

No members of the public were injured during the exchange, McGregor said.

"I just wanted to reassure the people of Tauranga, the community there, that they are safe," he said. "That we are talking about one motivated offender here, who did not want to be captured by police."

Local police were doing everything they could to ensure the Tauranga community was feeling safe.

In the western area of the Bay of Plenty, extra patrols would be operating, McGregor said.

The driver of the vehicle who was shot dead last night has not been identified by police.

It was hoped the offender would be identified this morning.

Police would only be able to tell whether the man was involved in the McLaren Falls homicide from earlier this week once he had been identified.

"We believe it to be a small-caliber weapon and a semi-automatic," McGregor told media.

Police also believe the firearm the man used to shoot at the police officers was semi-automatic due to the number of, and how quickly, the shots were fired

The officers who fired back at the offender were visibly upset when McGregor spoke to them last night.

Four officers and two police cars were involved in the pursuit.

The officers were armed offenders staff.

While fleeing police, the offender drove at approximately 40-50km/h and the officers held their distance from the man.

The pursuit took place around the Bethlehem area of Tauranga and there were several members of the public around at the time, McGregor said.

"That's why we come to work, to keep our community safe and we had to apprehend this person before he killed someone," he said.

The offender fired in excess of 15 to 20 shots at police, meanwhile, it was not known how many shots had been fired by police. An out-of-district team had come in to investigate the incident on behalf of the Independent Police Conduct Authority, McGregor said.

Speaking of the closure of State Highway 2, McGregor apologised to the community but said making them use a detour was necessary.

A large team was investigating in the area and it was hoped the major thoroughfare would be reopened later this morning or early afternoon.

Meanwhile, the investigation into the double homicide near McLaren Falls from earlier this week was ongoing and police were following "positive" leads.

"Obviously, we've still got a lot of groundwork to do but I tell you what, the investigation team is doing an outstanding job," McGregor said.

"Right from day one, they've gone in there, carried out a lot of inquiries and from those inquiries they've got some good leads."

Following shootings in Te Puke a few weeks ago, police met with local gang leaders and told them they had to work things out peacefully.

Police were hoping to get gang leaders from across the entire Bay of Plenty together and get them to work out their differences safely.

"We can't have them carrying out armed attacked, drive-by shootings, etc, in public, in broad daylight, at night, were innocent members of the public can get shot," he said.

"It's just not on and we're not going to tolerate that."

Gangs, of which many included members who had been deported from overseas, drove around in large groups to try and intimidate the public, McGregor said.

The police were working hard to try and eliminate organised crime in the region, he added.

However, despite recent events, McGregor wouldn't call the tensions between local gangs a "war".

"The situation with the homicide is completly different from what happened in Te Puke, completely different."

Once the man who was shot dead last night by officers was identified, police would contact the next of kin.

Tauranga Mayor Tenby Powell said today that he was concerned for the public's safety amid gang turf wars in the area.

McGregor said yesterday that police tried to stop a car at 7.46 pm on Carmichael Rd in relation to the fatal shooting of the two men on Tuesday. 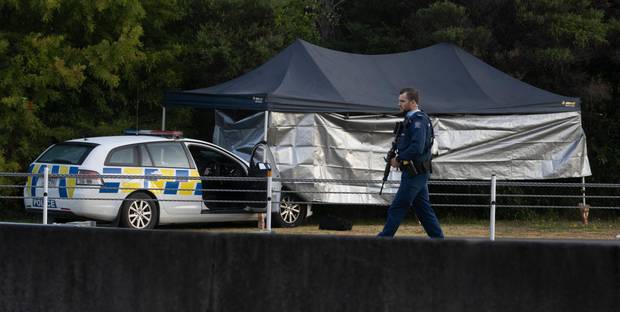 The car failed to stop and a gun was fired at police, he said.

"Police returned fire and in the exchange the offender was fatally wounded."

A witness told the Herald he could see a man's body on the ground and a nearby car appeared to have been run off the road.

Armed police officers were seen standing near a man's body.

"There were police in black - like what the armed offenders squad wears," they said.

It is thought no one else was in the vehicle at the time of the incident.

Residents reporting hearing shorts and seeing police with guns and ambulances rushing towards the area.

One person said there were "a number of families out walking" as the shots were being fired out the window of the fleeing car.

The man was a suspect in the murder of two men found dead inside a property at Ormsby Lane after police received reports of shots fired at 7.40pm on Tuesday night.

Witness Shianne Ormsby said she saw "a huge amount of police respond" to the situation.

"Little did I know they'd be a few metres from my house blocking off the main set of lights, all while being armed."

Mike Dork, who works in the area, said he saw up to 10 undercover police cars screaming southbound down SH2.

"Every cop in the area looks to be here," he said.

Another resident said she heard multiple rounds of gunshots ring through the air and the rush of police cars chasing the offender.

Tauranga Mayor Tenby Powell said today that he was "very concerned" about an innocent member of the public becoming collateral damage in the gang turf wars.

While police were doing a "stunning" job in difficult conditions, shots were fired in a public area last night.

"The weapons that are being used have a maximum effective range of 500 to 600 metres ... a bullet that's got long range and can do a lot of damage."

"I'm worried a stray bullet will kill someone in the crossfire."

Powell said h would convene a community meeting with Western Bay of Plenty mayor Garry Webber and two police commanders in the coming weeks to discuss the recent gang issues. A date has yet to be confirmed.

Earlier this week, Police Minister Stuart Nash warned residents that they should expect to see more armed police in the street following the double shooting.

He said the escalated response was a temporary measure aimed at tackling the latest flare-up between gangs.

Tuesday's homicide was the latest in a series of brazen shootings involving semi-automatic firearms, with a suspected arson along a row of the Bay of Plenty shops last month.

Nash said the Government was pouring more resources into policing the Bay of Plenty, targeting gangs and organised crime.

Detective Inspector Mark Loper said a scene examination was ongoing at the property of Tuesday's shooting with support from forensic specialists and an Auckland specialist search group.

He said additional investigation staff were being brought in from around the country to assist Bay of Plenty police.

The dead men are believed to be Paul Lasslett, 43, who owned the property, and Nick Littlewood, 32.

Loper said yesterday police were still working to understand the circumstances of the deaths and the involvement of any other parties.

"While police have spoken to a number of people in relation to the incident, we believe there may be others who are yet to talk to us."

"I'm very proud to be part of this community; the police are doing a great job under incredibly difficult circumstances."