Listen above as Steve Tew, who won the Outstanding Contribution to New Zealand Rugby award, speaks to Mike Hosking

When Kiwi rugby fans look back on 2019, it will be remembered for two things – an early All Blacks exit from the Rugby World Cup, and the rise of Ardie Savea.

The Hurricanes and All Blacks loose forward took 2019 by storm at both club and country levels, capping off the year being named the Kelvin R Tremain memorial award for Player of the Year at tonight's New Zealand Rugby awards.

The 26-year-old, who was unable to attend the event after undergoing knee surgery earlier in the day, claimed three awards on the night, being named Super Rugby Player of the Year and All Blacks Player of the Year as well as claiming the supreme award.

Savea reached a new level of play in 2019, starting eight of the All Blacks' 10 tests. A monster presence on both sides of the ball, Savea made the most of his opportunities to display his dominance with ball in hand as well as an impressive ability to secure turnovers at the breakdown.

Crusaders head coach Scott Robertson was named National Coach of the Year and said although he was disappointed in missing out on the role as All Blacks head coach, he was looking forward to the upcoming campaign with the Crusaders.

"There's always a natural process as a human, there's a natural disappointment because I've put everything in to it," Robertson said.

"I'm coaching the team I love, where I've had a lot of great moments as a player and now as a coach, I've got a lot of special bonds and a chance to do something pretty special." 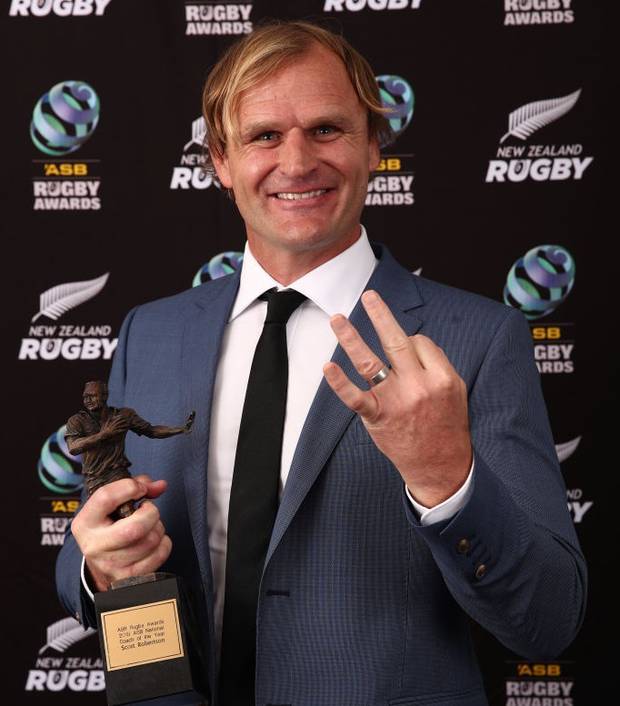 Scott Robertson with his coach of the year trophy. Photo / Getty

All Blacks Player of the Year Winner:

National Coach of the Year Winner:

Sevens Player of the Year Winner:

National Team of the Year Winner:

Fan's Try of the Year: