Auckland's mayor is calling on the Government to loosen border restrictions and allow the city's economy to welcome billions in spending from the likes of international students.

"Reopen Auckland" is the central plea to the Government in a joint submission being prepared by the city's council and education sector.

Mayor Phil Goff says he wants Auckland to be a prototype for a quarantine process that would safely allow high-value students to come to New Zealand for their education.

The call comes as it was revealed yesterday that hundreds of foreigners have already been allowed through our closed borders — including key production crew on the blockbuster Avatar sequels.

Economic Development Minister Phil Twyford revealed there was a little-known category for border exemptions for foreigners deemed essential to a project of "significant economic value".

Avatar producer Jon Landau disclosed on Saturday that he was "excited to be headed back to New Zealand next week" to resume work on the $1 billion movie sequels.

Goff now wants the Government to make other exemptions too.

He said he was working with Auckland Council's economic development arm Ateed and the education sector to put a proposal to the Government to let in international students.

"New Zealand is an attractive country for international students, and this is only strengthened by our strong public health response to Covid-19," he said.

"This presents an opportunity to capitalise on our advantages and inject billions back into our economy. 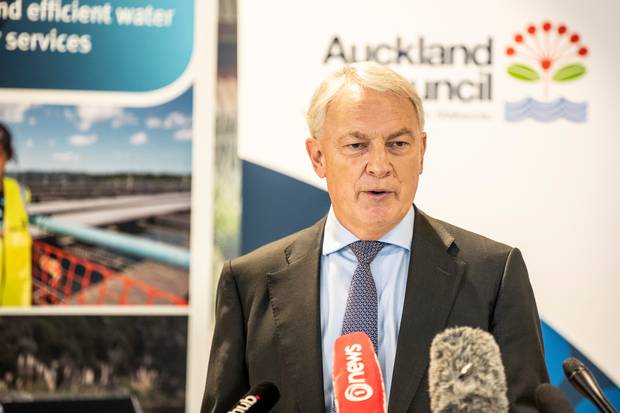 Phil Goff wants Auckland to be a "prototype" for quarantining international students in NZ. Photo / File

"Through strong border controls, mandatory testing, and quarantine on arrival, there is every reason why New Zealand could look to revive its $5 billion international education market to boost economic recovery while upholding strict public health measures to keep the virus out."

The Government is also under pressure to let in America's Cup teams and key people in West Auckland's film industry, where Amazon was gearing up to film Lord of the Rings when the lockdown hit.

Otago University epidemiologist Dr Michael Baker said in principle there was no reason why foreigners should not be treated in the same way as returning New Zealanders, who have been allowed into the country on condition that they stay in quarantine for two weeks.

"The current extreme form of management is 14-day quarantine, but there is a reasonable chance that a mix of other measures could shorten that," he said.

"And of course if we get to the point where New Zealand and other countries we are working with have achieved elimination according to a standard definition that we all adopt, that will make it much easier to imagine much more travel between countries.

"The obvious place to start is Australia, which is close to elimination and possibly even ahead of New Zealand in some states."

He said eradication might be defined as 28 days with no new cases. It is only five days since the last NZ case was reported on Friday.

"Like the film industry, they are identifying it as an industry that they want to make sure survives and benefits from New Zealand's unique status that it's going to have in a few months' time when we are more open and we are seen as a safe destination," he said.

Auckland and AUT Universities both confirmed that they are working with Ateed on "a draft plan that would allow students to return to the city on a transition basis".

Christchurch's economic development agency ChristchurchNZ says it is also "working with education stakeholders on the safe and appropriately-timed return of international students".

National Trade Academy managing director Craig Musson has proposed a pilot with up to 20 international students in agricultural trades and English language courses who would be quarantined for two weeks at a motel in a safe rural location just outside Christchurch.

"Between us and the students, we would fund the facility. We are just working through what the control requirements would be in terms of health," he said.

"I think we are a month or two before we'd be seriously in a position of potentially something going up to Cabinet," he said.

"We will probably want to move with Australia, but the answer will be that Australia is doing a lot of talking about it, I don't know whether they will or not. My feeling is that it would be very challenging for them to do so.

"They have exactly the same issues as us. The challenges are that no one has yet defined what a gold standard quarantine looks like."

"There is an opportunity to have conversations with the Government about what exemptions there might be for different areas, be they industries or regions," he said.

Tourism Industry Aotearoa chief executive Chris Roberts said about three-quarters of the country's 141,000 beds in hotels, motels, backpackers and holiday parks were empty, with only about 2000 beds currently in use for quarantining new arrivals.

Immigration Minister Iain Lees-Galloway said the border closure "has been an essential part of the sacrifices we have all made to keep people in New Zealand safe".

"There are few exemptions made at present, and these relate essentially to humanitarian issues or for critical skills. We are considering how and when to adjust these settings," he said.

"The international prevalence of Covid and managing the public health risk to New Zealand is key to any changes we would consider."