Fourteen armed police were involved in the "traumatising" uplift of a 5-month-old Māori baby from a single mother, a damning report into Oranga Tamariki's conduct reveals.

The incident is one of hundreds of harrowing tales recorded in a Whānau Ora report on the Māori-led inquiry into the government agency released today.

"Having interviewed so many whānau it was often the same message - arriving late at night, police with them, terrorising them and leaving them emotionally drained and distraught," she said.

The report was one of five reviews sparked by the highly-publicised uplifting of a newborn baby from her mother in Hastings last year, but was the only one led by Māori, who are five times more likely than non-Māori to have their babies removed by the state.

The report, based on interactions with 1100 whānau across the country, will be discussed at the Iwi Chairs Forum in Waitangi on Wednesday to seek support before presenting it to the Government, sparking a potential political showdown during Waitangi Day on Thursday.

"What happened [in Hastings] was not an isolated case," Glavish said.

"It has got to stop. There needs to be a complete overhaul of Oranga Tamariki."

During one of the hui, a single mother in the South Island told of how police and Oranga Tamariki staff converged on her home to execute an uplift order, that had been approved by the Family Court without her whānau receiving any notification. 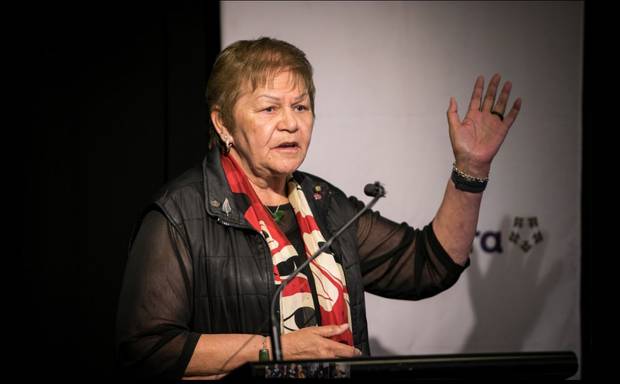 The woman thought she was heading to a family group conference at Oranga Tamariki, but instead she was met at her door by heavily armed cops and police dogs.

"We can clearly see from the volume of evidence - and the heavy-handed approach inflicted on this whānau - that something is so systemically wrong," Glavish said.

"This entrenched behaviour is plainly unjust."

Police would not comment directly on the case - or report - but a spokeswoman said the organisation had a legal duty to enforce Family Court orders.

The report found there was a level of distrust among Māori of government-led reviews, which was why it was important for Māori to lead its own inquiry into Oranga Tamariki, Glavish said.

It also called for a complete overhaul of Oranga Tamariki, the Family Court ex-parte (without notice) order process and the law that facilitated uplifts.

Oranga Tamariki chief executive Grainne Moss said the organisation acknowledged the report and the courage of the whānau who shared such personal stories.

"We will now take the time to work through the report," she said.

Moss said that while all New Zealanders wanted to see fewer children in care, Oranga Tamariki had an absolute obligation to protect those at-risk.

In the year to September the ministry received reports about 62,300 children - many involving serious harm issues including family violence, sexual abuse, neglect and methamphetamine.

Moss said Oranga Tamariki had made "good progress" since it was created in 2017.

"Listening to the views of others and better understanding the experiences of tamariki, rangatahi and whānau is crucial and this report gives us further perspectives to continue that work."

The Whānau Ora report is one of five inquiries to arise following the ministry's attempted taking of a week-old baby from a Hawke's Bay mother in May last year.

A damning review of the case, released in November, slammed Oranga Tamariki for "significant gaps" in trying to understand the family's current situation, and the lack of consultation with parents and whānau.

Moss apologised to the whānau at the time. The ministry has also announced changes to ensure children are better protected and cared for, involving working more closely with Māori organisations and iwi.

Children's Minister Tracey Martin said she was "really pleased" to receive the report because she was already working on many of its recommendations.

"I can't actually express how pleased I am to have this perspective," she said.

She said she was working with John Tamihere's North Island Whānau Ora commissioning agency to set up two or three pilot projects where families notified to Ōranga Tamariki could be referred to Whānau Ora agencies before they reached crisis point.

Glavish was one of five Māori women leaders - including Dame Tariana Turia - who recently filed an urgent claim to the Waitangi Tribunal, alleging the Government was underfunding and undermining Whānau Ora, a Māori-led health initiative.