Strong, whose previous best result on the world stage was a first place in the Points Race at the 2020 Cycling World Champs, launched a bold attack with Scotland's John Archibold and Wales' William Roberts with 43 laps left to run in the race.

The attack seemed to take the rest of the peloton by surprise as they failed to put together any sign of a counter-attack until it was too late. The result was that, with 10 laps to go, Strong's group lapped the main group of riders, leaving them as the sole medal contenders.

It was at that stage that teammates Campbell Stewart and George Jackson mucked in to do their best to help Strong; initially giving him a chance to rest his legs somewhat in their draft, before positioning him superbly to sprint to the finish line and a gold medal.

"It's a dream really, I raced really well. It's an awesome experience, I'm really happy to be at my first Commonwealth Games and for my debut race to finish like this is pretty awesome," Strong told Sky Sport following the race.

Strong said his gameplan was always to be aggressive and try to push the pace of the peloton to separate himself from some of the pure sprinters in the field.

"I've come off the road, I might not have as good track legs as some other people, so I really wanted to race aggressive and take it from the start and really make it a hard race.

"I thought that would play into my strengths at the moment and that's the way it panned out. I was lucky to be off the front with a couple of strong guys from Wales and Scotland, so I must thank them as well."

Fellow rider Stewart had nothing but praise for Strong's effort, saying it was a flawless ride.

"He raced superbly. Corbin was strong, went on the attack, made the right moves and he was perfect all day and we made sure he was in the best place possible for the finish. He probably could have done it by himself, but it's always better with teammates," Stewart told Sky Sport.

Jackson said he felt fortunate to be part of the race and play a role in Strong's victory, especially after being caught up in a horror crash on the velodrome earlier in the day.

"Am happy I'm not too injured from the first crash. I was a lucky one out there, there was a few more boys much more banged up than me," Jackson said. 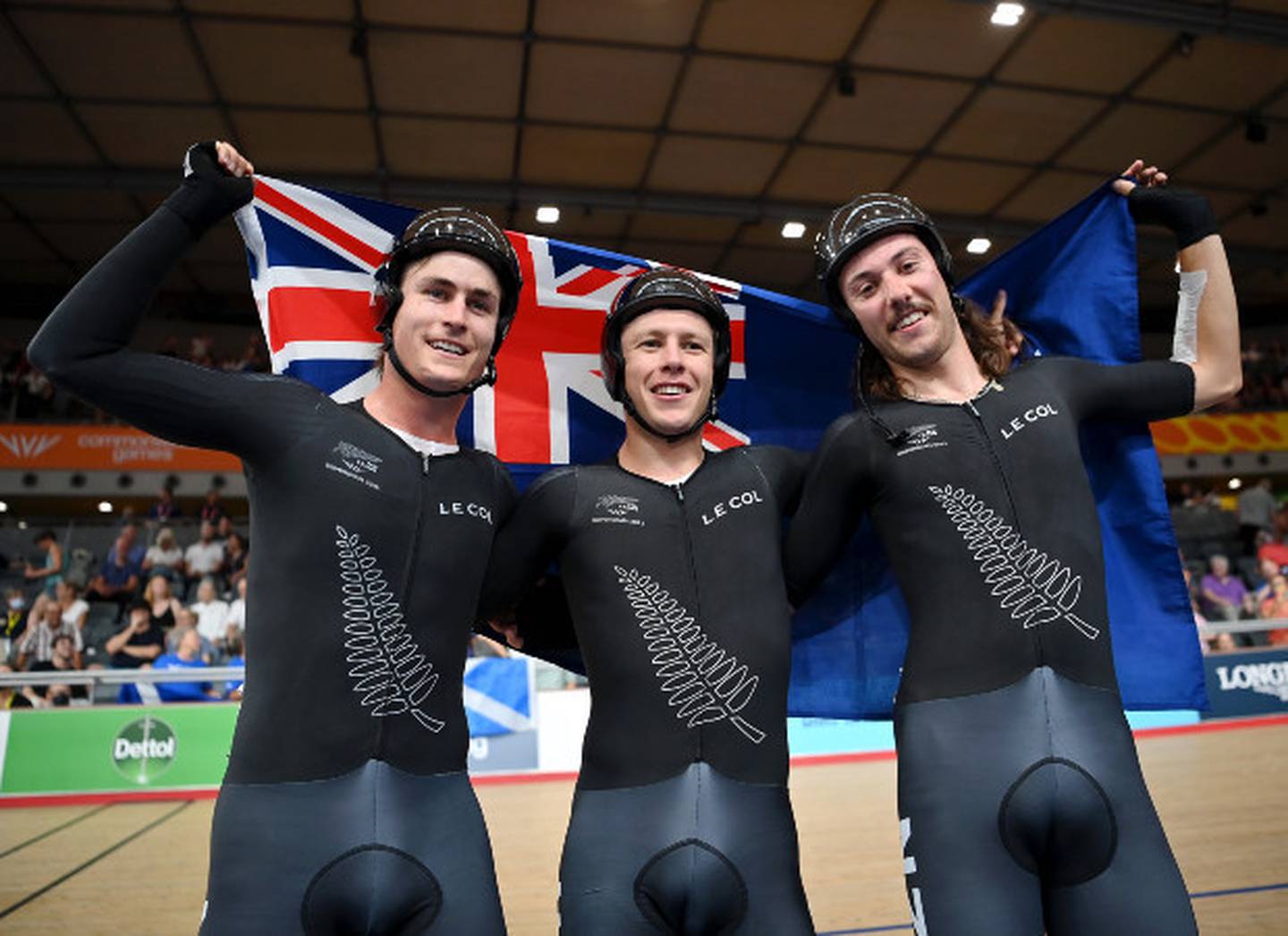 Earlier, Rebecca Petch was in line for a bronze medal with just one rider remaining in the women's 500m time trial, after a superb ride.

However, that remaining rider was Kristina Clonan, who set a Commonwealth Games record to claim gold by 0.06 seconds over Kelsey Mitchell, with Petch bumped to fourth.

Earlier, the Kiwi men's sprinters were unable to keep up with the feats of their peers, or their rivals on the track.

Callum Saunders, Sam Webster and Sam Dakin all bowed out early in the men's sprint.

Saunders was the first to go, finishing 17th in the qualification round which saw him miss the cut-off by just one place, edged out by Webster who took the 16th and final spot.

Webster was then quickly sent packing too by keirin gold medallist Nicholas Paul in the 1/8 finals, before Dakin, who was New Zealand's top qualifier in 10th, was beaten by 0.037 seconds by Shah Sharom to leave all the Kiwis to watch on from the sidelines for the remainder of the competition.

The Kiwi trio in the 25km women's points race also missed out on the medals, despite some combative rides.

Michaela Drummond, Bryony Botha and Emily Shearman all managed to take a lap on the field in the 100 lap race, but none could accumulate the extra points required in the sprints held every 10 laps to get onto the podium.

Drummond was the closest, being in the mix until the final laps, but the three leaders peeled off the front in the final laps and mopped up the remaining points, with Australia's Georgia Baker winning gold on 55 points over Scotland's Neah Evans on 36, with Eluned King of Wales in third on 32 points.

Drummond finished in fifth on 27 points, with Botha in eighth with 23 and Shearman ninth with 22.