Simon Bridges' leadership of the National Party hangs by a thread and commentator Matthew Hooton says he has committed the equivalent of political "hari kari" by going public about a challenge.

"My understanding was there wasn't a challenge at the time. Todd Muller was a couple of votes shy. By going public, Bridges has brought this upon himself," said Hooton, describing it as "political misjudgment".

Bridges' fate may be sealed by an unfavourable Colmar Brunton political poll tonight.

Hooton claims National's own internal polling is worse than Monday night's public poll which had the National Party on 30.6 per cent and Labour on 56.5 per cent.

A challenge to Bridges' leadership by agriculture spokesman Todd Muller will be held at a National crisis caucus meeting in Wellington tomorrow but it is thought that neither Bridges nor Muller yet has a majority.

If Muller wins, he is set to name Auckland Central MP Nikki Kaye as his preferred deputy.

What may tip the balance are the small number of supporters who prefer Judith Collins or Mark Mitchell and who they will end up supporting.

Collins has ruled herself out and Mitchell is not expected to contest the leadership.

An unexpectedly high party vote in tonight's 1 News Colmar Brunton poll might save Bridges after the slump to 30.6 per cent in the Newshub Reid Research showing for National on Monday, and 56.5 per cent for Labour.

Under that scenario, 16 of the current National caucus of 55 would lose their place in Parliament

But few are anticipating a good result for National with the Jacinda Ardern-led Government being seen as responding to the Covid-19 health and economic crisis, rather than creating it.

Despite a lack of personal popularity, Bridges kept National's party vote strong until the Covid-19 crisis and at the start of the year, the September election was considered an open contest.

Supporters for both the Bridges and Muller camps are talking up their chances, but more in hope than certainty.

Bridges' strongest argument is that the party should remain focused on the economy, rather than putting up a virtual unknown and untested leader in Muller against a hugely popular Prime Minister.

Former leadership contender Judith Collins said yesterday she did not believe a vote of no-confidence in Bridges would pass. But whatever happened had to happen fast.

"The public do not like dissension and disunity from political parties and particularly in election year. So no matter what happens, things have to happen quickly and then everybody has got to get behind the leader," she said last night.

"It's a challenging time. It's always hard, no matter what happens. I am very happy being the MP for Papakura and being a valued member of the team. "

Bridges pre-emptively announced the challenge yesterday morning on television before Muller had even confirmed it to his caucus colleagues.

Bridges also chose to have the vote on Friday rather than at next Tuesday's caucus after receiving a voice message from Muller telling him he wanted to challenge.

Muller then sent a note to his colleagues with his campaign pitch, saying the party could not win under Bridges.

"This country faces the most enormous challenge since the end of the Second World War," Muller said in his email to caucus.

"Labour has failed to deliver on every measure it has set for itself in Government. This will not change and the consequences of it being re-elected at this time will be catastrophic for two generations.

"Our communities and our economy are at stake. It is essential National wins this election.

"I share the view of a majority of colleagues that this is not possible under the current leadership.

"I believe I am best placed to earn the trust of New Zealanders by September 19. 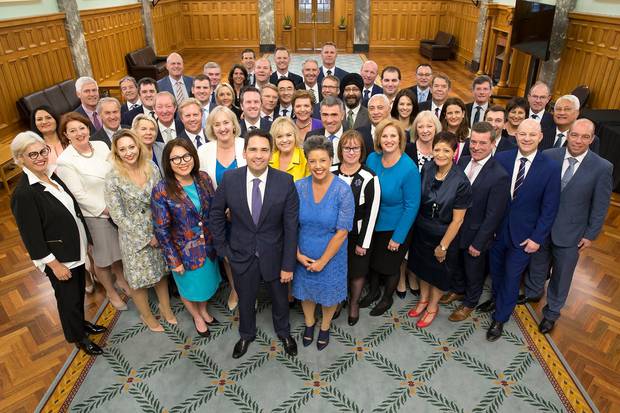 The National caucus in 2018. Under Monday's poll, 16 of them would lose their seats. Photo / Supplied.

"I will be talking to each one of you about how we can all pull together and be deserving of New Zealanders' trust.

"I love this party and what we can do for our country. Best wishes. Todd"

Bridges has not responded to requests for comment but said earlier he was confident of keeping his job.

Muller is a relative newcomer to Parliament, having come in only in 2014 compared to Bridges in 2008.

They are neighbouring MPs, Bridges for Tauranga and Muller for Bay of Plenty.

Muller received endorsement this week from former Prime Minister Jim Bolger, for whom he worked as a young man.