It was the hottest and hardest competition in Justin Rummel's life.

The 32-year-old Te Awamutu man has just returned from competing in the World Chilli Eating Champs in Newcastle in the UK.

He challenged the world's undefeated champ - UK Chilli Queen Shahina Waseem - to a competition where they ate 38 of the world's hottest chillies in 30 minutes.

"It was just crazy. As soon as you finish they just hand you more and more. Your body just goes into shock. I was pretty out of it by the 10th round," Rummel said.

The father-of-three completed all 10 rounds and was just biting into his second chilli in the speed eating section when he had to grab the bucket.

"My body just rejected it. I couldn't do it anymore." 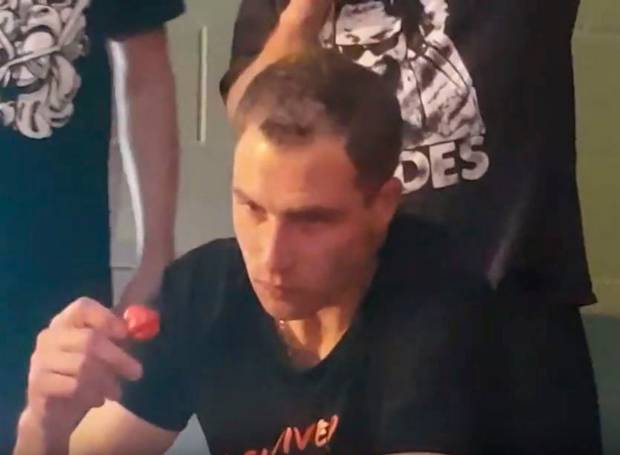 But despite being unable to take the title off Waseem, she still gave Rummel the League of Fire World Champion Chilli Eating belt to bring back to New Zealand.

The UK chilli eating competitions have just ended, but New Zealand's is due to start in February and Waseem will be back in Auckland in May at the NZ Champs to try and win it back.

And Rummel, who is also know as Justin the Thunder from Down Under, is confident it will be him the UK Chilli Queen has to win it off as he plans to retain the New Zealand title next year.

Originally from Melbourne, the spray painter by trade has been living in the Waikato for almost four years and has only been involved in chilli eating competitions for 18 months.

He has always loved hot sauces, but it wasn't until his partner at the time filmed him eating a reaper and shared it on social media that a workmate told him about the NZ Chilli Eating Competition. 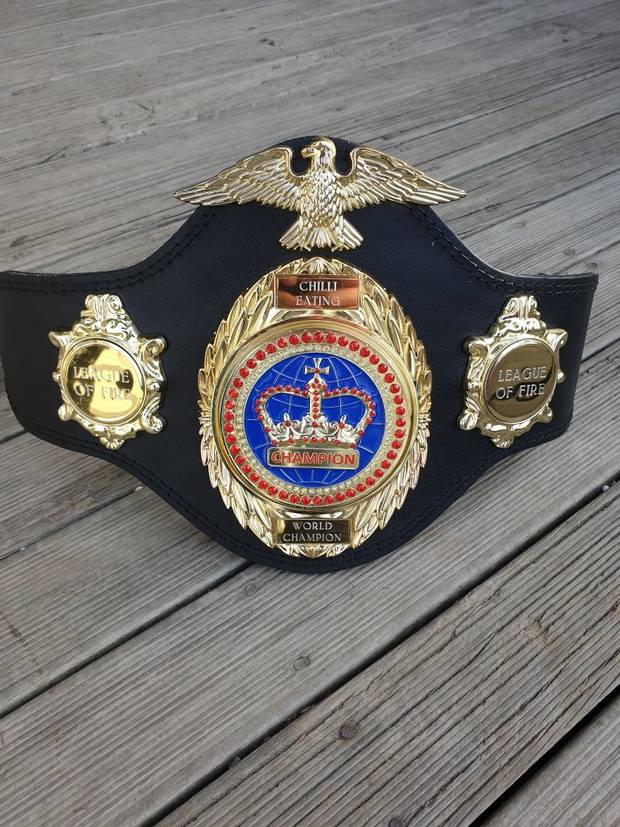 Kiwis will get the chance to complete for the Chilli Eating World Champion belt next year. Photo / Justin Rummel

Rummel entered and won his first competition in the Waikato in 2018 and was placed third nationally.

This year he won both the Bay of Plenty and Waikato regional competitions and took out first place in the NZ Chilling Eating Champs in August. He also beat US chilli eating legend Johnny Scoville.

Rummel said eating a meal a few hours before was crucial to making sure you didn't end up in hospital. He also consumes two cans of creamed rice 30 minutes before a competition starts to line his stomach.

While eating hot food is something many people avoid, Rummel said he competing was fun.

"I just like it - just the rush you get from it. It's the best natural high. You get a mad endorphin rush."

He's consumed a lot of chillies in the past two years, but said the hottest he's eaten is the Dragon's Brain, which is grown in New Zealand.

Fire Dragon Chillies owner Clint Meyer, who also runs the NZ Chilli Eating Champs, said it was great to have the belt in New Zealand and they would be taking it around New Zealand as part of the champs. The battle for the belt would be run as a separate match.

Meyer said they were looking for worthy contestants who could eat about 40 chillies in 30 minutes. He said Rummel's effort in the UK was "super human".

"Most people could probably only eat one of these chillies. One of the super hots because they are all over a million scovilles - the heat units to measure the heat of chillies. It's pretty crazy really."

Meyer said some people liked the competitive side of the chamionships, while others liked the rush they got from it after the burn wore off.

"You're not in a normal state of mind when you finish one of those competitions and you feel really good. Well once the pain subsides I suppose or you get rid of it."