Team New Zealand boss Grant Dalton has confirmed being scammed in a fraud relating to a Hungarian bank account.

He says the money that was effectively stolen was not public money and some of it has been recouped.

Those behind the deception may never be known or be brought to justice, despite fraud police here investigating, he said.

Speaking to Newstalk ZB's Mike Hosking this morning, Dalton was responding to revelations that there is an investigation into the use of public funds for the America's Cup defence next year.

It follows Herald revelations today that public money earmarked for the America's Cup - a $3 million loan to Team NZ - has been "reclassified", and a payment made to a "Hungarian bank account through fraud".

That is according to allegations outlined in a Ministry of Business, Innovation & Environment and Auckland Council letter.

The confidential letter, obtained by the Herald, is dated June 22.

In it, it reveals allegations around the handling of public money, the operation of the Cup itself and worries about public safety.

It also lifts the lid on officials' concerns that the event organisers, America's Cup Events (ACE) and Team NZ, are in breach of obligations.

The letter - written by council chief executive Stephen Town and MBIE chief executive Carolyn Tremain and sent to ACE and Team NZ - outlines "serious matters" raised by a financial investigation firm commissioned by the Crown to look into the financial management of next year's America's Cup in Auckland. 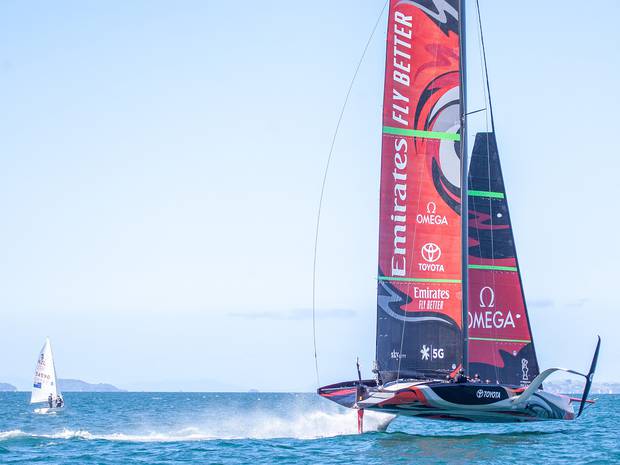 Asked directly today if they had misused public money, Dalton was quick to answer: "No, not at all."

"One of the informants was in charge of the accounts of the event - and that's a really important point.

"So some time ago, I approved an invoice - I approve invoices all the time, of course - to a large contractor in Europe.

"And no, I did not check the noughts and the ones on the bank account. I approved it - it was a correct invoice, there was nothing wrong with it, it was exactly per contract - and the money was sent to Hungary.

"So is that fraud? Yeah, it is. It's fraud in so much that...we were basically defrauded."

Dalton said the team immediately got in touch with government officials after they realised what had happened.

"Instantly, we rang MBIE [and] told them what had happened and that it was not government money - because it wasn't - and secondly, we got straight into the fraud police who have been working carefully out of New Zealand, but into Belgium and across through Interpol - and we've recovered some of that money."

Dalton acknowledged that they may never know who was behind the scam.

"We were defrauded by scammers - we don't really know. Police don't know yet and probably will never know. But some of the money is back," he reiterated.

Asked if there was anything that might come back to bite them, Dalton said no.

"Categorically, absolutely no. I guess that's one of the disappointing things about all this, because allegations are easy to make - they're often harder to defend."

Letter raised serious concerns with use of public funds