New research into the country's appalling road toll figures has blamed alcohol and drivers on learner licences for a spike in crash deaths.

The findings identify concerns about the falling number of alcohol checkpoints being carried out by police and problems with drivers progressing to a restricted license.

A just-published study, involving researchers from the Ministry of Transport and Otago and Canterbury universities, picked apart crash data over the past decade.

It asked why declining crash rates began to reverse in 2013, with fatal crash numbers rising 2 per cent each of the following three years.

Study leader Dr Darren Walton said the Ministry of Transport and the NZ Transport Agency commissioned several reports to investigate the trend. But none could pin the rising toll to usual factors like shifts in travel, employment or economic growth.

"We took a new approach using a different form of analysis." 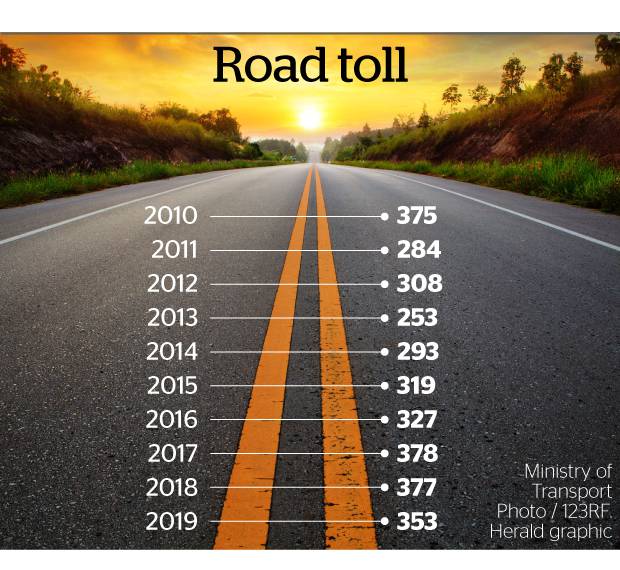 Using the Crash Analysis System – a collation of police reports for all fatal and injury crashes – researchers modelled 21 separate factors, ranging from the sex and age of drivers, to the time of crashes and the vehicles, roads and speeds involved.

Their findings suggested that, over the 2014 to 2017 period, the odds of alcohol being a factor in a fatal crash shot up by about 40 per cent.

This was despite a drop over that time in reported alcohol-related driving and a 2014 law change that lowered the adult alcohol limit from 80mg to 50mg.

Based on the findings, the researchers suggested something had changed in policing practices which meant fewer detections were occurring, and which allowed for a higher likelihood of alcohol being a factor in crashes.

Meanwhile, an increase in crashes involving drivers with learner licences likely reflected a change in the way drivers were graduating through the system, with a "bottleneck" between those on their learner and restricted licenses.

Despite a recent law change lowering the expiry date from a maximum of 10 to five years, the researchers believed many learner drivers were simply taking longer to obtain a restricted licence, and thus had higher odds of appearing in serious crash statistics.

Both of those trends were more pronounced in Auckland, something they found might partly be explained by local population growth.

The researchers were left with several lingering questions about the influence and resourcing of police.

"Have learner licence holders changed their perceptions of the likelihood of being caught and ticketed for a minor $100 fine?

"It is possible that New Zealand's successful road safety initiatives of the past have been undermined by reduced levels of enforcement and an unexpected outcome from the graduated driving licence system."

Walton told the Herald the increasing road toll couldn't be put down to failing infrastructure.

"First, the effect is too large. Second, we have invested over $13b since 2013 to improve the network, only to get a worse outcome from a road safety perspective."

'Not a good result'

Automobile Association road safety spokesman Dylan Thomsen wasn't surprised to see alcohol highlighted as a factor – and was concerned that lowering the breath alcohol limit hadn't made the difference hoped for.

"There are a few crucial things at play. One is the number of alcohol checkpoints being done by police, and that has dropped quite substantially. There were three million checkpoints in 2013, and that has fallen to less than two million a year over recent years.

"We think that is likely to be having an impact on people's perceptions over whether they're likely to get caught, and we want to see the number of those checkpoints raised back up again."

The data about learner drivers also raised issues about people not progressing through the licensing system, Thomsen said.

"The Government really needs to look at figuring out how it's going to encourage those people to take the next step."

Police declined to discuss the findings, saying the researchers were those most appropriate to comment.

"What police can say is that there are four main behaviours that contribute to death and serious injury on our roads; people not wearing seatbelts, people driving impaired by fatigue, drugs, or alcohol, people driving distracted – including by mobile phones – and drivers travelling too fast for the conditions," a spokesperson said.

"This is where we focus our prevention and enforcement activities."

The study comes as the Government last month released its new road safety strategy, which aimed to nearly halve rates of death and serious injury over the next decade, with a focus on speed, vehicle and work-related safety, system management and safer choices and behaviour.

Police will get more funding as part of a new strategy, which could lead to more dedicated road policing and an increase in safety cameras.

A grieving relative of a mother and baby killed by a recidivist drink-driver wants a zero-tolerance approach to drink driving and harsher penalties for convicted drivers.

Kaiwaka mother Janiah Fairburn, 20, and her 2-year-old daughter, Azarliyah, were killed when a drunk driver slammed head-on into their car on March 30 last year.

Fairburn's aunty Renae Paikea called for a zero-tolerance approach to driving under the influence.

"In my eyes, when you get in the car under the influence, when you're drinking and driving, it's pre-meditated murder," she said.

"It's not an accident in my eyes. They know they're going to drink, they know they picked up those keys and they chose to drove."

Anyone convicted with driving under the influence should not retain their license, she said.

"I think there should be no chances given to them.

"You know you're going to drive, there's other people on the road, even if you think you're okay, what are you to know about the other driver?"

She has started a petition calling for harsher penalties for those who get behind the wheel while intoxicated and kill others.

"If it could save another family feeling what we felt...it still feels raw and it's coming up to a year."

Paikea knows of another family who lost a loved one to a drink driver, who was sentenced to home detention.

"We got a slap in the face and that family got a punch and a kick in the face. It's not fair, we deal with it for a lifetime."