Parents are being urged to talk to their children about receiving the Covid jab amid confirmation schools will be used to vaccinate teens aged 12-15.

Principals and the Children's Commissioner have thrown their support behind the rollout plan to ensure 265,000 teenagers join the rest of the population in being vaccinated.

Schools are now tipped to play a key role in the Covid-19 vaccine rollout with Medsafe provisionally approving the Pfizer jab for those aged 12 to 15.

Secondary Principals' Association of New Zealand Vaughan Couillault welcomed the news, saying using schools was a "great plan" and in line with previous mass immunisation campaigns such as with measles and even polio.

"The more of the community that we can get vaccinated, the better it is for everybody," said Couillault, who is also the principal at Papatoetoe High School - the key location for the Auckland February Covid cluster.

"Increasing the breadth of approvals to benefit everybody I think is a great plan going forward and it will help us get back to business a lot faster. "

Children's Commissioner Judge Andrew Becroft said it was a child's right to access the best healthcare and he urged parents to make "wise and responsible" decisions.

He hoped parents and guardians would discuss the vaccine with their children and reach a decision as a family about what to do if they had opposing views to their children.

"Parents and guardians should get the best medical advice ... I think all the medical evidence thus far would show that it's a wise and responsible thing to do, both for the child, the family and the community. I hope that would be the approach."

Previously the Pfizer vaccine had only been approved for those aged over 16, but Pfizer trials in April showed 100 per cent efficacy for those aged 12 to 15.

Canada, the United States, Europe, the United Kingdom and Japan had all since approved it for that age group.

Epidemiologist Professor Michael Baker said vaccinating children in this age group, and eventually down to infants, was important for any population hoping to reach sufficient vaccine coverage to largely interrupt the circulation of the Covid-19 virus.

"While children only rarely get seriously ill or die from this infection, they are important in the spread of the virus," he said.

"Vaccinating them will protect the children themselves, and those around them, including grandparents and others who are vulnerable to serious outcomes." While it was too early to outline details and sequencing, she said schools would likely be part of the rollout.

The next step is for the Government to review advice from the Ministry of Health about Medsafe's "decision to use", with a final decision later this month. Until then, none of the around 265,000 teens aged 12-15 would be given the vaccine.

The news comes after the latest Ministry of Health Covid survey found there was still some hesitancy among caregivers vaccinating their children, with 16 per cent of parents of 12-15-year-olds saying they would "definitely not" allow it.

That was up from 10 per cent in April. The main reason for this is needing to be assured about vaccine safety for children.

Director-general of health Dr Ashley Bloomfield said it was an "important decision" and encouraged parents to inform themselves so they could make "the right decision".

In mass immunisation campaigns, such as those undertaken at schools, written consent must be gained from the parent/guardian of any child under the age of 16. Individuals who are aged 16 years or older may self-consent.

Ardern said there are enough vaccines in New Zealand's projected stocks to vaccinate the younger group without anyone missing out. 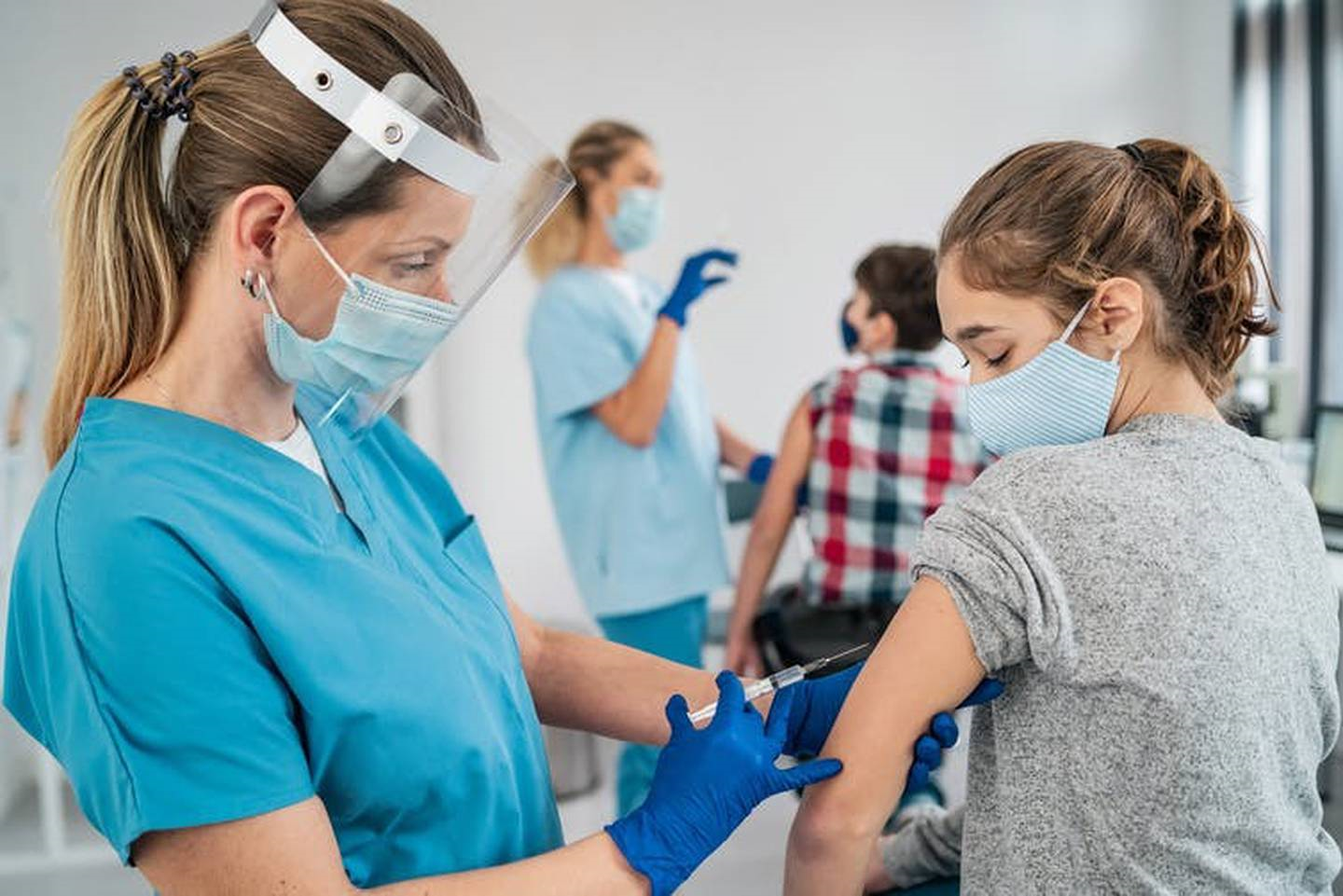 The Pfizer-BioNTech Covid-19 vaccine was found to be 100% efficacious in preventing symptomatic Covid-19 in children ages 12 to 15 years. (Photo / Getty Images)

As the lowest-risk group they would likely be near the end of the rollout, but those with health vulnerabilities and family of MIQ and border workers could be prioritised.

There was also the possibility they could be vaccinated at the same time as other whānau members for "efficiency".

Auckland University vaccinologist Dr Helen Petousis-Harris said using schools, as with other vaccines, was an efficient way to carry out a mass immunisation campaign.

The delay in approval for 12 to 15-year-olds was only due the ethical way trials were prioritised, she said.

As older groups had proven more susceptible to Covid-19, the focus had been on approving the vaccine for them first and working down to younger people.

Trials are under way overseas currently to approve the vaccine for 6 to 11-year-olds.

By the time the roll-out eventually reached all children in New Zealand there would be even more data to rely on, Petousis-Harris said.

Immunisation Advisory Centre director Dr Nikki Turner told Newstalk ZB the Medsafe decision was "based on really good science", with the key question being be when this group would be vaccinated.

Currently close to 1 million vaccine doses had been administered, with high priority groups still being worked through.

People aged over 60 were not even scheduled to be vaccinated until at least July 28.

"Ultimately it is a good idea for as many as possible to be offered the vaccine.

"But the important group in New Zealand right now is adults, and particularly high-risk adults, not teenagers, so we need to keep our priorities in order and focus our resources there."

Child psychiatrist and paediatrician Dr Hiran Thabrew said the vaccine for teens would be a relief for many parents.

Their jabs would provide an increased sense of security for young people to be at school and to travel overseas.