Up to 1300 people were able to walk out of managed isolation facilities without being tested since a negative test result was meant to be mandatory.

But director general of health Ashley Bloomfield said a very low risk was posed by the 2159 people who had left those facilities between June 9, when the policy was meant to be in place, and June 16, when it was actually put in place.

That was because almost all of them had spent 14 days in isolation before leaving, which is the global standard to minimise the risk of anyone spreading Covid-19 into the community.

Bloomfield announced one new case yesterday, but confirmed an unofficial case when asked directly about whether there was a case at a managed isolation facility in Rotorua.

He said he was aware of the Rotorua case but it had not been included in the daily update because the test result had not been confirmed before the 9am cut-off time.

Those cases were contained and there was no evidence of domestic transmission of Covid-19, but Bloomfield said he couldn't categorically rule it out.

There were 54 people who were higher risk because they were allowed to leave managed isolation before they completed 14 days for compassionate reasons.

Of those, 39 have tested negative, 11 won't be tested because of health reasons or because they are children, and three are still awaiting test results.

One hasn't returned calls since being tested, but Bloomfield said the person had not tested positive.

That person has still been referred to enforcement services, as had five people who had yet to be contacted and who may have been in contact with two Covid-infected sisters while they were staying at the Novotel Ellerslie.

Bloomfield said the police could be called in, if necessary, and anyone could be required to be tested if there were grounds to believe they had Covid-19.

One of the new cases is a woman in her 60s who flew into the country on June 18 on a repatriation flight from India.

The case in Rotorua caused the city's Ibis Hotel to be put into lockdown.

Since June 16, when the two sisters returned positive tests after being allowed to drive from Auckland to Wellington, there have been more than 45,000 tests across the country.

Heightened anxiety over the case of the sisters had seen a surge in demand. A record 9174 tests were conducted on Tuesday.

Public buses in Auckland had to be diverted because of huge queues of traffic around testing stations on Tuesday, and one man said it took more than a day to find somewhere that could test him.

There are 37 community assessment centres compared to 62 on April 4 during lockdown, but Bloomfield said more can be reopened if necessary.

The number of designated practices, swabbing centres and mobile stations has increased from 47 to 80.

Yesterday morning Auckland University medical professor Des Gorman said the people released without first being tested may have released Covid-19 into the community.

"While we don't want to over-egg the souffle, we have to make the assumption these people have reseeded the infection in the community," he told Newstalk ZB. 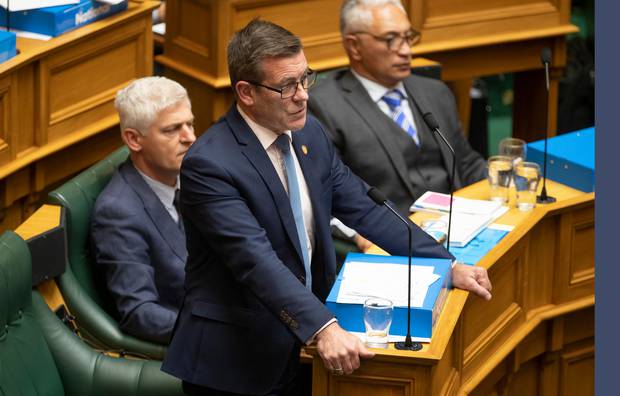 National MP Michael Woodhouse is standing by his claim that a homeless man enjoyed 14 days at the Crowne Plaza on the taxpayer. Photo / Mark Mitchell

Of the 2159 people, Bloomfield said the proper protocols were applied to at least 800 of them because they tested negative before leaving managed isolation.

That leaves 1359 who may have been wrongly allowed to leave without a test, and that has happened with at least 449 people: 210 have since tested negative and 239 are awaiting results.

There are 791 still being contacted, and 119 will not be tested for various reasons, including refusing a test.

People can't be forced to be tested once outside managed isolation unless there was good reason to think they were Covid-infected. Bloomfield said he had no reason so far to think any of them might be.

Meanwhile National Party health spokesman Michael Woodhouse criticised the amount of resources the Government had used to look into his claim that a homeless person had enjoyed a 14-day stay at the Crowne Plaza.

He stood by his claim and lashed out at Megan Woods, the minister with oversight of those facilities, by accusing her of "throwing mud" in a letter she sent him asking for his help to shed further light on the matter.

No evidence has been found, and Bloomfield and Government ministers are calling it an "urban myth".

Woodhouse also said it was mind-boggling that people's national health index numbers weren't being gathered at the border, and he claimed that a request to do so had been rejected.

Collecting the numbers would have made it easier to find out how many people had been granted compassionate leave without first being tested.

It took health officials just over a week to find and release that information because they had to match their own data with data held at the managed isolation facilities.