Listen to audio above as The Sun executive editor Dan Wootton speaks to Tim Dower.

Following today's unprecedented Royal Family summit at Sandringham to thrash out the way forward to Harry and Meghan's desire to quit their duties, the Queen has released a statement.

In a deeply personal message by Her Majesty the couple are referred to as "Harry and Meghan" - rather than their titles the Duke and Duchess of Sussex - further clouding their royal status.

The statement indicates that the couple will not receive money from the public purse but its reference to a 'period of transition' does not clarify how they will achieve self sufficiency.

While the Sussex's future within the royal family remains unknown, there were a few clues within the six-sentence statement that hint at what life may be like for Harry and Meghan after they distance themselves from the crown.

The statement also clarifies the couple's wish to not be reliant on public funds, as they had previously expressed.

While the Queen can only say so much, as matters look to be resolved in the coming days, there are some tell-tale clues in her statement that reveal much about the couple's future. 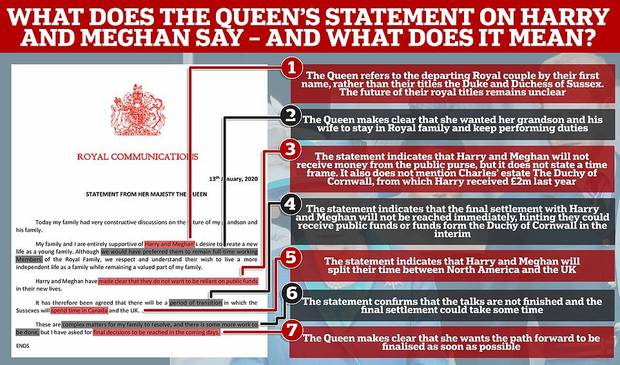 Her Majesty referred to the couple as 'Harry and Meghan' rather than their titles the Duke and Duchess of Sussex. Photo / Daily Mail

"My family and I are entirely supportive of Harry and Meghan's desire to create a new life as a young family."

The Queen's choice of words indicate a desire to show a united front within the family.

Among speculation of feuding within the ranks and William's anger over Harry's apparent "blindside" move, Her Majesty appears to be looking to make sure each member of the family is on the same page, regardless of their personal views.

Her reference here to the couple as "Harry and Meghan", rather than "the Duke and Duchess of Sussex", as per usual official statement protocol, could well be the first indication the couple will give up or be stripped of their HRH titles.

"Although we would have preferred them to remain full-time working Members of the Royal Family, we respect and understand their wish to live a more independent life as a family while remaining a valued part of my family."

This is a clear indication of the Queen's disappointment in Harry and Meghan ditching their royal duties. But it also suggests she's not shutting the door on the possibility of the couple still performing royal duties of some nature in the future.

"Harry and Meghan have made clear that they do not want to be reliant on public funds in their new lives."

The couple's desire to give up their access to public funds could very well allow them to pursue commercial deals and new ventures.

However this means they may no longer be able to dip into Prince Charles' estate, The Duchy of Cornwall, which they received $NZ3.92 million from last year.

However, this does not answer the question of who will be liable for the couple's extensive security bill - though it is understood the Canadian Prime Minister has offered to pledge funds towards this during their time in Canada.

"It has therefore been agreed that there will be a period of transition in which the Sussexes will spend time in Canada and the UK."

The reference here to the couple as "the Sussexes" looks to suggest that both Harry and Meghan will keep their royal titles during this period of transition as they wind down their duties.

"These are complex matters for my family to resolve, and there is some more work to be done, but I have asked for final decisions to be reached in the coming days."

While there is no doubt that this is yet another unprecedented crisis for the family, the Queen appears to want a fast solution as she is desperate for the storm to pass and royal life to return to business as usual.