Covid-19 Minister Chris Hipkins has defended the country remaining in red under the Covid traffic-light system - as New Zealand is set to welcome new freedoms with the axing of vaccine passes, QR scans and many mandates.

Hipkins says the country remains under red - with no indication when that might change - because of the relative strain on hospitals, even as the Omicron peak passes in Auckland.

"[Hospitals] are relatively under strain. We've said right the way along, we want to avoid as many people getting Covid-19 as we can, particularly the people who might die from it. So that continues to be our objective," Hipkins told Newstalk ZB's Mike Hosking today.

Hosking quizzed Hipkins on the timeframe of lifting the new maximum indoor capacity of 200 people - given that that level was still constraining the likes of Netball New Zealand and indoor events such as orchestras and concerts.

Hosking: Can we say, once the whole country has peaked, we can start to look at an increase in numbers beyond 200 indoors?

Hipkins: Absolutely, yes, once we get through this peak we will be aiming to move back down the traffic lights - back to orange and eventually if we can get there, back to green again.

Hipkins admitted he wanted to see a higher overall rate of booster jabs - the country is sitting at about 72 per cent of the eligible population - but he said he was pleased to see higher percentages in vulnerable groups.

One factor, he said, was that many people will have had Covid, and not been able to get a booster shot in time.

Hosking: Why does the Prime Minister bang on and give us a condescending history lesson every time she speaks and not just get to the detail?

Hipkins: The context the Prime Minister provides to the announcement is important. It is important to remember the journey we have been on in the last two years.

Hosking: Is it? We've all been on it. Why do we need reminding all the time? And why do we need to be told how brilliant you guys are?

Hipkins: Well, I don't think it was about saying how brilliant the government is. I think New Zealanders can reflect with a good degree of pride on the overall response to Covid-19 over the last two years.

Restrictions ease - what you need to know

Experts are calling for a renewed focus on booster and child vaccinations along with increasing access to high-quality masks as the Government moves to relax Covid-19 protections.

Vaccine passes and most mandates will be dropped from April 4, the Prime Minister announced on Wednesday.

Changes to these policies, seen by some to be causing great division in society, will potentially see unvaccinated teachers back in the classroom, along with other professions, on Tuesday, April 5.

However, with ongoing public support for mandates and vaccine passes there are also many in the community nervous about the changes, particularly disabled and immunocompromised whānau.

Ardern also announced outdoor gathering limits would be scrapped and the number of people allowed to gather inside would increase from 100 to 200 from 11.59pm Friday, under the changes to the red light traffic setting.

The move means outdoor concerts, sports and other outdoor events would be able to resume under the red setting from this weekend.

QR scanning will no longer be required, while masks will continue to be used and be one of the key protections.

Vaccine passes will no longer be required to be used from 11.59pm on April 4, however businesses could continue to use them if they wanted.

With the vaccine requirements gone, the traffic light system would simply see gathering limits at red, masks at orange and "guidance" at green, Ardern said.

The system was still needed as a framework in case of future variants, Ardern said.

The Government was also ending the controversial vaccine mandates in education, police or Defence Force workers and those workplaces using them from April 4. Ardern said case numbers in Auckland had peaked over two weeks ago, and were starting to plateau across the rest of the country, allowing the relaxations.

On Wednesday there were 20,087 new community cases reported and a further 11 Covid-related deaths, taking the total to 210 and the seven-day rolling average of reported deaths to nine. 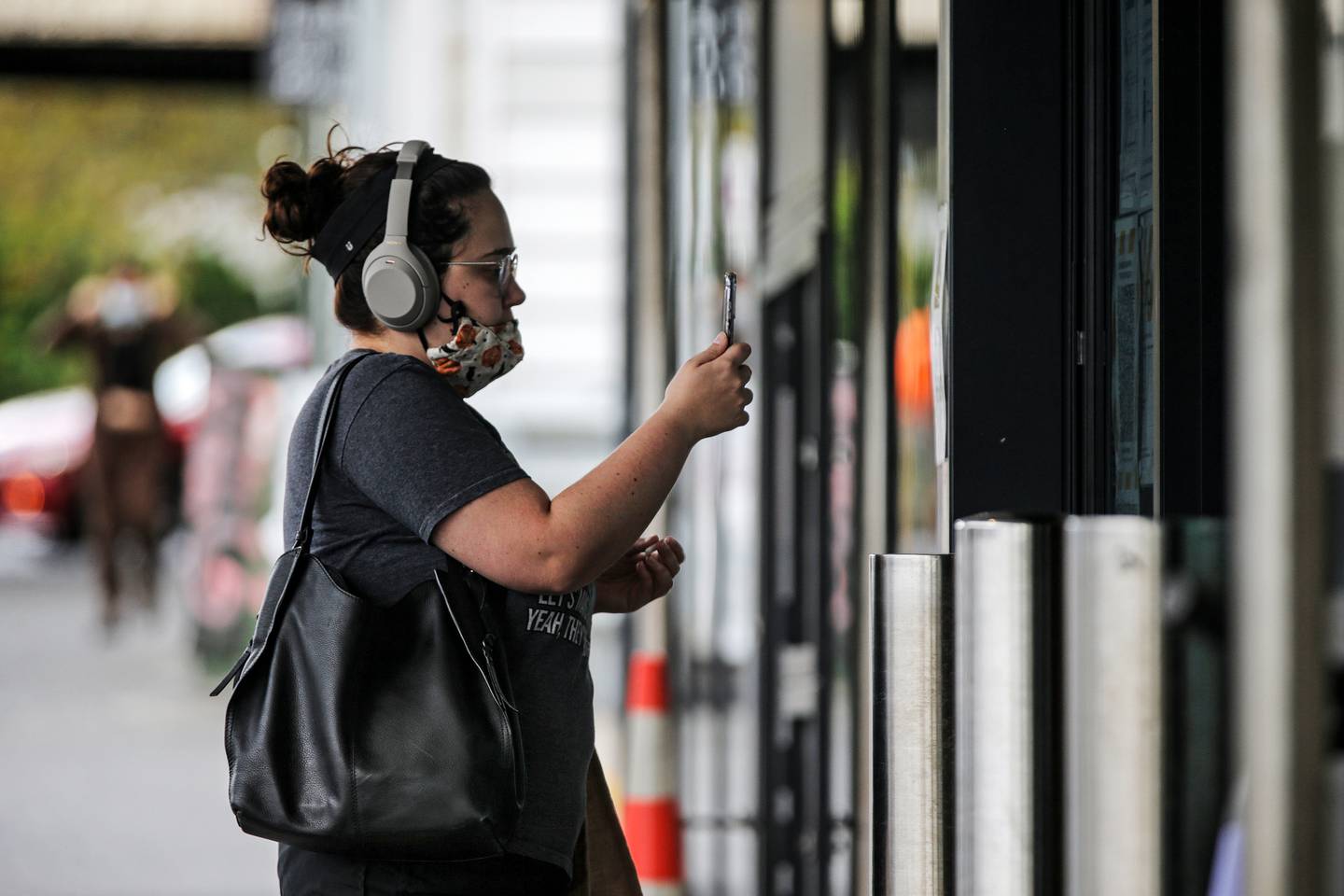 QR code scanning on entry to businesses will not be needed from this weekend. Photo / Alex Burton

There are 960 people in hospital with the virus, including 31 in intensive care.

Politically, reaction to Wednesday's announcement has been split down political lines.

The Greens and Te Pāti Māori say they are concerned about the impacts on vulnerable communities.

"Stronger protections in schools, equitable vaccination rates, and free masks are essential for keeping our most at-risk communities safe.

"They are also necessary to protect our overwhelmed health system.

"It is also far too premature to drop vaccine mandates for education, especially in early childhood education where under-5s cannot be vaccinated."

Longer-term they called on the Government to improve indoor air quality and plan to improve wellbeing and address poverty.

Te Pāti Māori co-leader Debbie Ngarewa-Packer has asked where the Māori input was in the decision, given the disproportionate impacts.

Meanwhile, those in the business community and politicians on the right have welcomed the announcement and called for the Government to go further.

"The Government would be better to ditch the whole thing and create some simple rules around masks and perhaps venue limits, rather than persist with a complicated colour-code system that has never been used properly and that barely anyone understands.

Once the border reopens to Australians on April 13, National wanted the traffic light system gone for good, and an end to pre-departure testing, along with the eventual phasing out of all vaccine mandates, with health workers to be phased out last.

Act also wanted the traffic light system gone, along with scanning and tracing, and vaccine requirements.

Leader David Seymour said the delay to bringing in the new rules made no sense as people should be able to undergo regular testing as an alternative to being vaccinated.

The 200-person indoor gathering limit with seating rules would also be of "little relief for the hospitality sector", he said.

Experts have generally come out in support of the announcement while urging a greater focus on increasing vaccinations and availability of high-quality masks.

"Children and staff with pre-existing conditions would have the most to benefit from maintaining high levels of vaccination.

"This shift should be coupled with concerted efforts to improve ventilation, indoor air quality, and high-quality mask use consistently across educational settings, and catch-up on routine childhood immunisations, in preparation for winter and any future variants of concern."

Covid-19 modeller Professor Michael Plank said the new measures made sense, given vaccines, while hugely effective at preventing severe illness, were less effective with Omicron at stopping people catching and spreading the virus.

Meanwhile, there were also increasing levels of infection-acquired immunity in the population. Ardern said on Wednesday they estimated up to 1.7 million people had contracted the virus, many with mild versions that have not been reported.

However, there still remained "a difficult journey ahead", Plank said.

"At least as many people will be infected on the way down the mountain as on the way up, and pressure on our healthcare system is likely to remain high.

"Now that RATs are becoming more widely available, adding a requirement to 'test to release' after the seven-day isolation period would reduce the risk of people going back into the community while still infectious."

"Pacific peoples currently make up 18 per cent of Covid-19 cases, and nearly double, 35 per cent, of all hospitalisations.

"Of all those currently eligible for a booster dose of the Covid-19 vaccine, 72.8 per cent of the general population have been given one, and for Māori and Pacific, booster levels are at 58.6 per cent and 59.5 per cent respectively."

Ardern said the traffic light setting would be regularly reviewed, with the next review on April 4.

Documents released today accompanying the announcement indicated the green setting would not be seen until at least after winter, citing likely influxes of influenza and other infectious diseases alongside new Covid variants.