The great journey is over for the Warriors.

They crushed the misfiring Manly Sea Eagles 40-28 to finish the NRL season in 10th, and it may well be the most glorious 10th in professional sport.

Glorious might be taking the case a bit far, okay, but for anyone who has followed their path, which included having to regroup following the sacking of coach Stephen Kearney after six rounds, it is one which has left a strangely golden glow.

The players and staff will be back in their Auckland homes this week, 150 days after setting up camp in Australia to help the NRL season be completed under Covid-19 restrictions.

While the unique situation will long be remembered, it is the future which now seems so bright for the club after they galvanised their spirit and organisation under interim coach Todd Payten, who takes over at the North Queensland Cowboys next season.

Payten has thanked the players for helping secure his first, fulltime first grade coaching job, after he first turned down the Warriors. The club, in turn, should forever be grateful for what he achieved.

The game is also grateful to the Warriors. 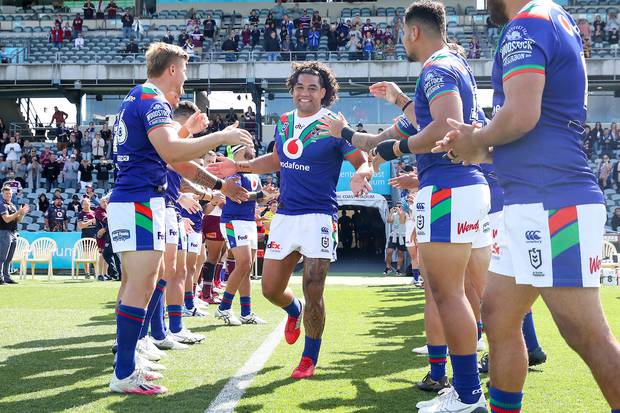 Adam Blair runs out to a guard of honour. (Photo / Photosport)

Manly formed a guard of honour for the Warriors players as they entered the field at on the Central Coast, as a 'thank you' for the Auckland club's efforts this year.

But the Warriors now look like a club no longer interested in gratitude or platitudes, and are gearing up to become the NRL heavyweights the sporting fraternity had always hoped they would be.

Playmaker Kodi Nikorima was one of the stars of the final match, as he has often been during their best moments this year, and he will now become the key as a big pack tries to lay the platform for his running in 2021.

Adam Blair, playing his 331st game, made his NRL farewell in the match, having confirmed his retirement on Saturday. And a number of fringe players won't be back next year.

What is left will be a solid core and with reinforcements led by Manly prop Addin Fonua-Blake on the way, the future looks healthy, although it never pays to oversell the Warriors. Or not yet, and certainly not before new coach Nathan Brown gets to work.

Fonua-Blake and a number of Manly topliners were missing yesterday, and their attack was horribly out of sync.

They were made to pay, with one of the Warriors' bit-part players Adam Keighran – who doesn't have a contract for next season - among the stars with three tries from centre, and a sharp pass which created another. The Warriors celebrate a try to Adam Keighran. (Photo / Photosport)

There was an avalanche of points in the final round of the NRL and this game had a bit of a high-scoring festival air to it.

The first half was a free-for-all which produced eight tries and left the Warriors well on the way to victory.

The Sea Eagles had started the stronger and led by 10-0 before inviting the Warriors to mount a comeback.

As for Blair, he got to take a traditional, last game conversion attempt. The less said about it the better.

"It's been a crazy ride," Blair said.

"I've given my all to every team I've played for. It's been a tough year for our club and everyone in general.

"It felt like we were starting a club all over again. This club is going in the right direction, they've recruited well. I just want to see them succeed."

Daly Cherry-Evans and Tevita Funa made an absolute hash of collecting a dreadful Chanel Harris-Tavita kick behind their line, and Nikorima had a free touchdown.

Manly stuffed up the subsequent kick-off, the Warriors had the ball back, and Nikorima sent big Eliesa Katoa on a big run to the line.

Two more quick tries followed, making it four in nine minutes, and a 20-10 lead. The Warriors weren't finished, as Katoa charged over the line, after Nikorima had toyed with the Manly defence.

Keighran almost added a sixth Warriors try for the half before a magical Cherry-Evans kick bounced over a Warriors defender and sent wing Abbas Miski on a tricky 80-metre run to the tryline.

And the Manly resurgence continued straight after halftime, when Miski scored his second after an Adam Pompey error from the kick-off. It didn't last long, and the Warriors could celebrate a tough and bizarre year with a semblance of style.