Jacinda Ardern has asked for a review of a decision to reject a UK family from entering New Zealand on humanitarian grounds after their son was killed at sea by a speedboat.

On Saturday, the Weekend Herald reported that Barbara Genda and Harry Jarman had been refused an exemption by the Ministry of Health (MOH) to enter New Zealand's maritime border.

Their 14-year-old son Eddie was killed on August 9, after he was hit by a speedboat on Moorea Island, near Tahiti, while checking an anchor.

The accident is the subject of a manslaughter investigation.

The family is now held up indefinitely in French Polynesia, trying to sell their yacht and return home to the UK before the cyclone season arrives.

On Monday, the Prime Minister raised the plight of the UK family while discussing the maritime border exemption with Newstalk ZB's Mike Hosking.

"I did see a case recently which I thought actually on humanitarian grounds, you know I thought a reasonable case had been made," Ardern said.

"I'm going to go back and look at that one, that was the case of a family who had a death on their yacht."

The MOH subsequently told the Herald they were reviewing the family's case "as a matter of urgency".

The MOH said they were still finalising what options, if any, might be available to the family in order to enter New Zealand via the maritime border with their yacht.

However, the MOH said they had not yet been able to get in contact with Genda, Jarman and their 13-year-old daughter Amelie.

Genda said yesterday it "comes as a surprise" the Prime Minister had intervened on their behalf, but at the moment they did not have regular internet connection and had not heard from the Government.

The family are trying to sell their $1 million yacht - the only home they have - in order to return home to the UK and buy a house. 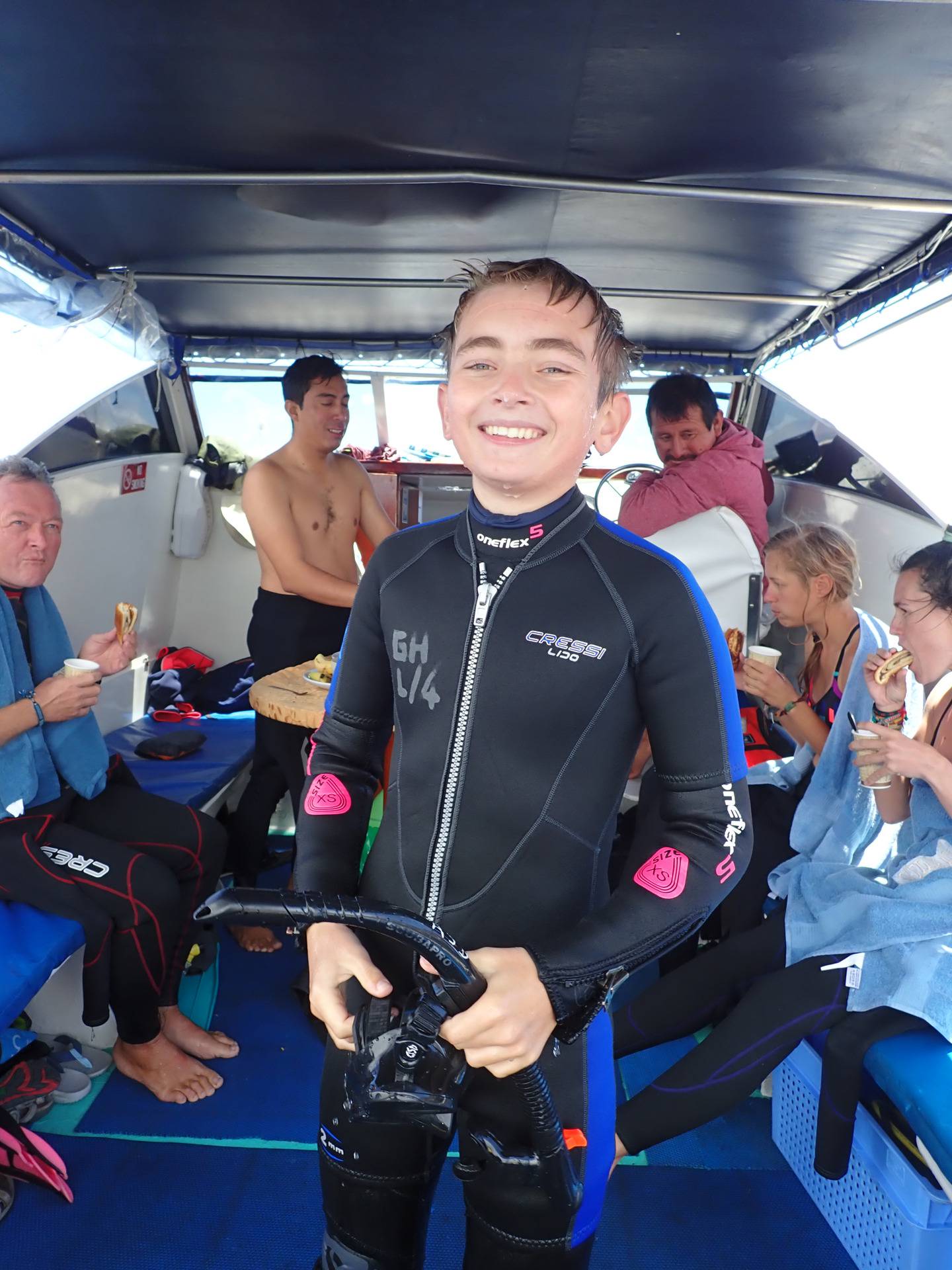 Eddie Jarman, 14, was hit by a speedboat and killed off Moorea Island in French Polynesia on August 9. His family have been rejected entry into NZ border under humanitarian grounds. Photo / Supplied

Genda said it was almost impossible to sell their 17-metre yacht, September AM, in French Polynesia.

Auckland yacht brokers 36 degrees had urged the family to make the "utmost effort" to bring their boat to New Zealand because there were prospective buyers here - but none that could fly to Tahiti to view their yacht.

The family also obtained a letter of support from the British High Commission assuring the MOH that Genda and her daughter could return to the UK within days of arriving in New Zealand.

Yet the MOH refused the family from West Sussex's application on October 2.

The family had been on the round-the-world sailing trip since January 2019, after selling their house to buy September AM.

Genda says the family need the capital from the sale of the yacht to return home to the UK, buy a home and try to restart their lives.

"In the whole uncertainty of our life ahead of us without Eddie, at least one certainty was we could go to New Zealand and very likely sell the boat and move on," Genda said last week.

"Because of that rejection we will live in that uncertainty, and we live on a boat that reminds us of him every day.

"Every time I go out in the cockpit and look over I remember the scene, seeing my son floating in the water unconscious and probably dead by that time, being dragged by a woman who recovered him."

The MOH's refusal letter to the family's border entry application said director general of health Ashley Bloomfield took into consideration the fact they had already managed to repatriate Eddie's body to the UK.

The family flew back to Sussex to bury Eddie in August, but had to return to their yacht, September AM, with their daughter to navigate cyclone season and try to sell it.

The MOH extended their condolences to the family for their loss and said "due consideration was given to their circumstances".

"The application did not meet the high threshold of a humanitarian exemption," the MOH told the Herald.

"For clarity, humanitarian reasons or other compelling needs would be unlikely to include situations relating solely to financial loss, or to vessels travelling primarily for pleasure or convenience."

However, it seems the Prime Minister' intervention in the UK family's situation has caused the MOH's into a sudden re-evaluation.

The MOH can provide an exemption for a vessel with foreign citizens to enter the New Zealand maritime border under four criteria: reprovisioning or refuelling, humanitarian reasons, delivering the ship to a business, and carrying out a refit or repair job that costs more than $50,000. 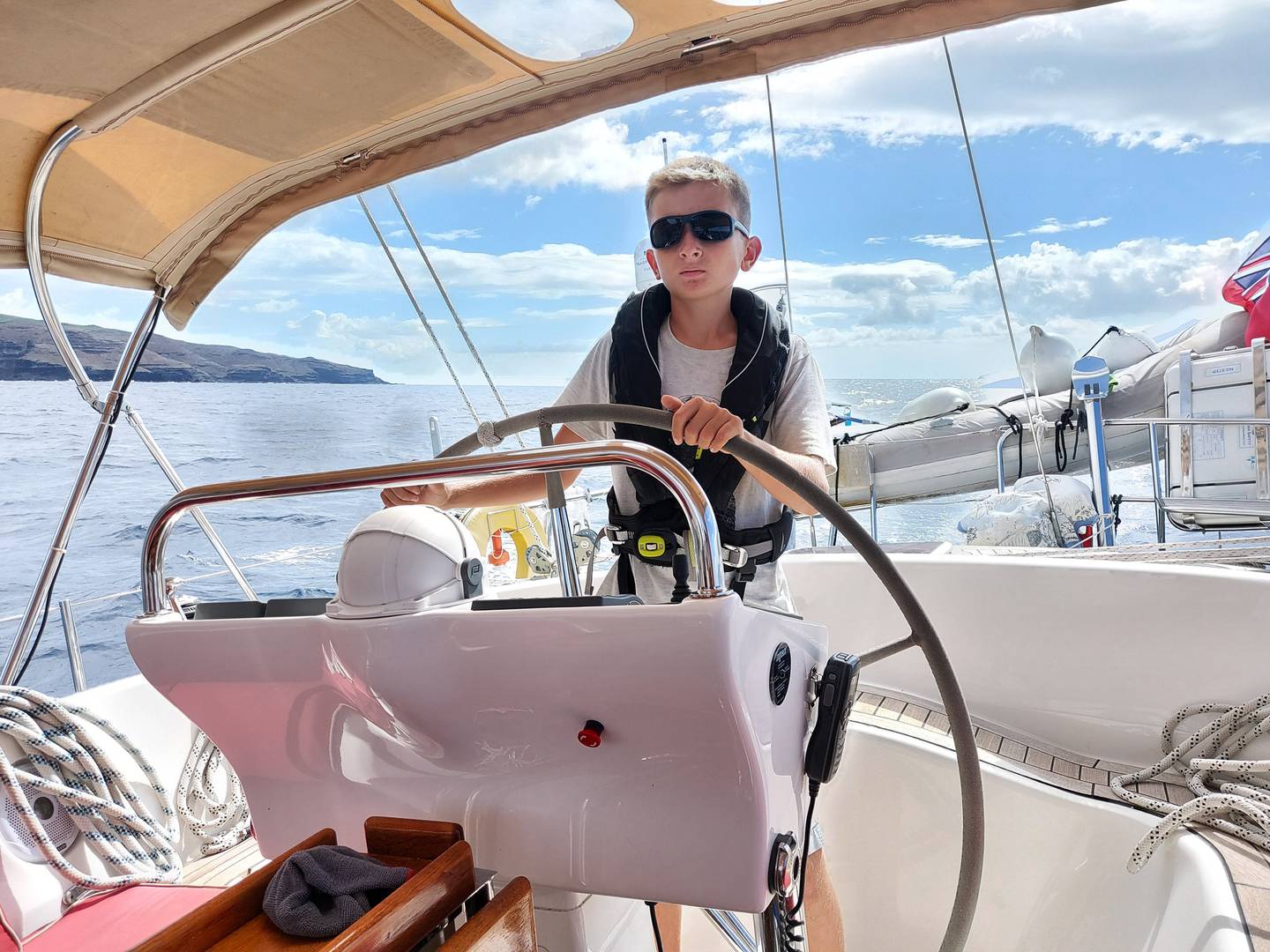 Fourteen-year-old Eddie Jarman on board the family. Photo / Supplied

Most of these superyachts are undergoing refit jobs at New Zealand marinas that cost millions of dollars.

"I feel it's one rule for them and one rule for us. Why all the superyachts have been approved and none of the yachts? It's for economic reasons," Genda said.