New Zealand has the highest death rate for teenagers and young people among 19 of the world's developed, wealthy countries.

It also ranks poorly in terms of adolescent suicide, pregnancies and deaths related to cancer and respiratory illness, according to British healthcare think tank Nuffield Trust.

"We've got this idea that New Zealand is this wonderful, clean, green, beautiful nation that is a wonderful place to raise children, so this paints a different picture."

This was driven by its relatively high youth suicide rate and youth road toll. In these areas, New Zealand ranked near or at the bottom of the rankings at nearly every level - early teens, late teens and over-20s.

Wallis said a number of issues are to blame for the shocking statistics and that it won't just be one thing.

He said one of the challenges facing New Zealand is our childcare, which has moved away from a focus on 'free play' and resiliance.

"In the last fifteen years, we’ve wanted to teach our three, four, five-year-olds literacy and numeracy instead of doing the free play that would build up resilience, so I think that's one factor."

Wallis also said that research shows that having a parent at home during the first year of life has also eroded away.

“You’re essentially data-gathering in the first thousand days of life. The best way to maximise that potential is to have an at-home parent.” 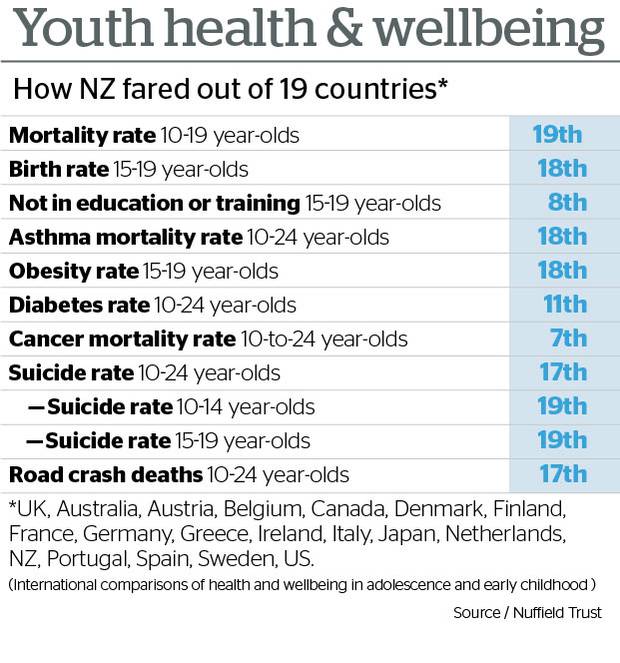 He adds that the exam system needs to be re-examined, as weekly assessments put New Zealand students in a constant state of anxiety.

Young Māori men are over-represented in these statistics, which Wallis puts down to racism and ignorance.

“A lot of the reason we have such a negative rate is because we are still quite a racist country, and it's quite hard to be Māori and have high self-esteem in this country.

"We don’t teach Te Reo at schools. We don’t learn about New Zealand history. There’s a prevailing view in the country that Maori are inferior."

The study's broad definition of adolescence - 10 to 24 years - is based on scientific evidence that humans' brains are not fully mature until at least 24.

"It is quite distressing on the health front," said Associate Professor Joe Boden, who works on the 30-year-old Christchurch Health and Development Study.

"This is where you are developing life habits, essentially," said Boden. "Diet, exercise - these things get established during this period.

"So it's really important that you're able to find ways to help kids through this in a healthy manner. And comparing ourselves internationally, we're not doing very well."

The British study creates a different picture of adolescence in New Zealand to various longitudinal studies, which broadly show that young people are thriving.

"The majority of kids do have some problems here and there, but they generally grow up pretty healthy and happy and they're well-educated," said Boden.

"So it doesn't shake my belief that New Zealand is a good place to grow up. But in terms of rare events or severe outcomes, we're not doing particularly well in those areas as you can see from general mortality, years of life lost, and smoking and obesity."

New Zealand fared better in some areas, in particular the number of youth not in employment or training (NEET), and diabetes rates, where it placed in the middle of the pack.

Out of all the indicators in the report, suicide was possibly the most concerning. While most indicators were trending downwards, the youth suicide rate in New Zealand had been steady for 12 years.

The Government hopes to address this through its Mental Health Inquiry, which is specifically looking at the existing work on suicide prevention.

A separate study, released today by the Children's Commissioner and Oranga Tamariki, found that most New Zealand children and young people said they were faring well.

The study of 6000 children also found that a third said they were facing challenges in some aspects of their life, and one in 10 faced multiple challenges, including racism, discrimination, bullying, poverty, violence and drugs.