This morning, Brenton Tarrant entered shock guilty pleas to the murder of 51 people in Christchurch on March 15 last year. Senior journalist Kurt Bayer was in court and explains how the remarkable events unfolded.

It's not clear what sparked the mass killer's change of heart.

As New Zealand prepared to enter a Covid-19 nationwide lockdown earlier this week, the man accused of the Christchurch mosque shootings suddenly told his lawyers he may want to change his plea. After long denying murdering 51 Muslims at Friday prayer at two city mosques on March 15 last year, he was to put his hand up – he was the killer terrorist.

And yesterday, from his maximum-security cell at Paremoremo Prison, the 29-year-old Australian sent formal written instructions to his Auckland-based defence lawyers Shane Tait and Jonathan Hudson that he now wanted to plead guilty.

It resulted in a remarkable behind the scenes chain of events that sent the criminal justice system – deemed an essential service during the lockdown- into overdrive, urgently trying to organise a court hearing amidst a country preparing for a month-long lockdown.

But the worst, inescapable fact of it all? None of the shooting survivors or victims' families could know.

Justice Cameron Mander, the judge presiding over the gunman's case since his first High Court appearance 21 days after his arrest – and today convicted him on all 51 charges of murder, 40 charges of attempted murder, and a terrorism charge - would later explain why.

"Despite the defendant having provided his counsel with written instructions of his intention to change his plea to guilty and he having now done so, there was of course no guarantee that when the charges were read to him this morning he would in fact do so," he said in a minute issued following Tarrant's shock guilty pleas this morning. 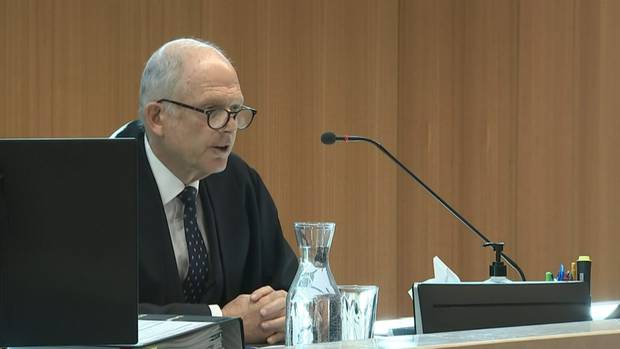 Justice Cameron Mander has explained the need for secrecy in relation to the gunman's decision to plead guilty.

"It was therefore necessary to suppress the fact that the matter was being called and the purpose of the hearing."

The city's two imams, Imam Gamal Fouda of Masjid Al Noor and Imam Alabi Lateef from Linwood Islamic Centre – who both survived the massacres - were asked to come to court today to witness proceedings on behalf of their Muslim communities.

Afterwards, they had to go and speak to their communities.

A court-imposed one-hour embargo on publicising details of today's hearing, which concluded at 10.30am, gave court and police victim advisers a window to try and alert the victims and families as soon as possible.

'He was caught red-handed

Omar Nabi, whose father Haji Daoud Nabi was killed in the attack, said he learned of the guilty plea just as he was about to go into prayer.

"It's about time. His plea should have been earlier but it's good he's changed his mind. And good to have it done," he said.

"There shouldn't have been a trial anyway. At end of the day the proof's in the pudding and he was caught red-handed, it speaks for itself."

Justice Mander admitted it was "regrettable" to hold the hearing without any victims or family members being present, especially given the " obvious reasons of health and safety that apply at this extraordinary time".

But he felt it could be managed if numbers inside the courtroom were severely limited. He said today signalled a "very significant step" in bringing finality to the proceedings.

Six journalists from New Zealand's major media organisations were granted permission to be in court today. They were spread out across the courtroom as part of coronavirus personal distancing guidelines.

Along with the two imams there was a third member of the Muslim community, Detective Inspector Greg Murton, in charge of the investigation, Christchurch Crown solicitor Mark Zarifeh and Crown prosecutor Barnaby Hawes, a court registrar, court taker, a Ministry of Justice media representative, and court security officer.

Although the families couldn't be there today to witness the murderer admit his crimes, Justice Mander stressed that when Tarrant is finally sentenced, it will be once the courts return to normal operations after the Covid-19 restrictions ease.

But for now, the families can take comfort from the fact they will be spared a long, painful, harrowing trial and finally witness justice