A Kapiti Coast woman has hailed her neighbourhood as the best street in New Zealand after their touching tribute one-year on from her husband's death.

On Sunday the 75-year-old planned to honour her husband with a quiet glass of wine in the back yard.

"A year ago yesterday my husband died. He died at home at 12 noon," Shirley told Kerre McIvor.

"Yesterday morning I got up and put out a nice table cloth on our outdoor table and put his box of ashes out and a photo of him - He loves a Bacardi so I put a bottle of Bacardi and a can of Coke next to his photo." 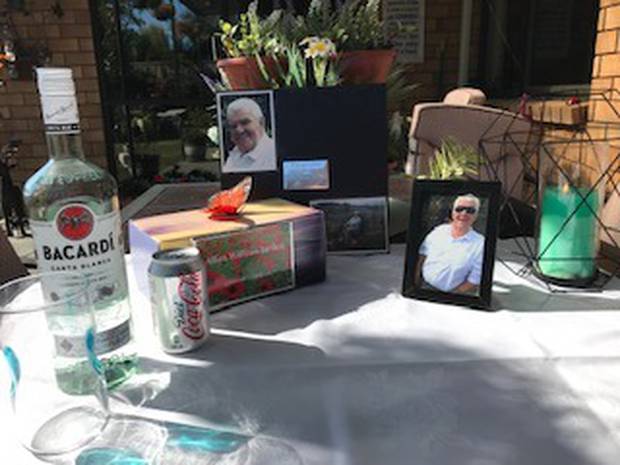 Shirley had set up her outdoor table with a photo of Allan, his ashes, and his favourite drink - a glass of Bacardi and coke. Photo / Supplied

While Shirley was settling in for a quiet tribute to her husband, her neighbours at Harry Shaw Way had other plans.

It was a surprise phone call one minute before 12pm which left Shirley in tears.

"Now I live in the best street in New Zealand," she told ZB.

"I thought right, I'm going to have a wine at 12pm and I'll charge my glass to him. At 1 minute to 12 my phone rang and my neighbour said what are you doing?

"I said just going to charge a glass to Allen. He said 'would you like to walk out to the letter box?' I haven't been out past it for the last two weeks.

"I walked out to the front and every neighbour in my street was standing in the middle of the road or by their letter box all charging a glass to Allen. I just burst into tears."

Her neighbourhood's kind act has, Shirley says, made her feel included despite only being in a lockdown bubble of one.

"Although I'm in the bubble by myself, I just had the most wonderful time.

"They were walking down the street to chat, all keeping their distance.

"It was wonderful to feel while I'm alone, I'm not alone. It was heartbreaking yet beautiful.

"When we took Allen from home to the chapel a year ago, the neighbours lined the street. I feel so blessed."