New Zealand's rowdiest volcano just had one of its biggest episodes in recent times, as White Island blew. There are reports up to 20 people have been injured.

It followed a series of warning signs that had been growing more alarming over recent weeks.

This afternoon, that alert level shot up to 4. 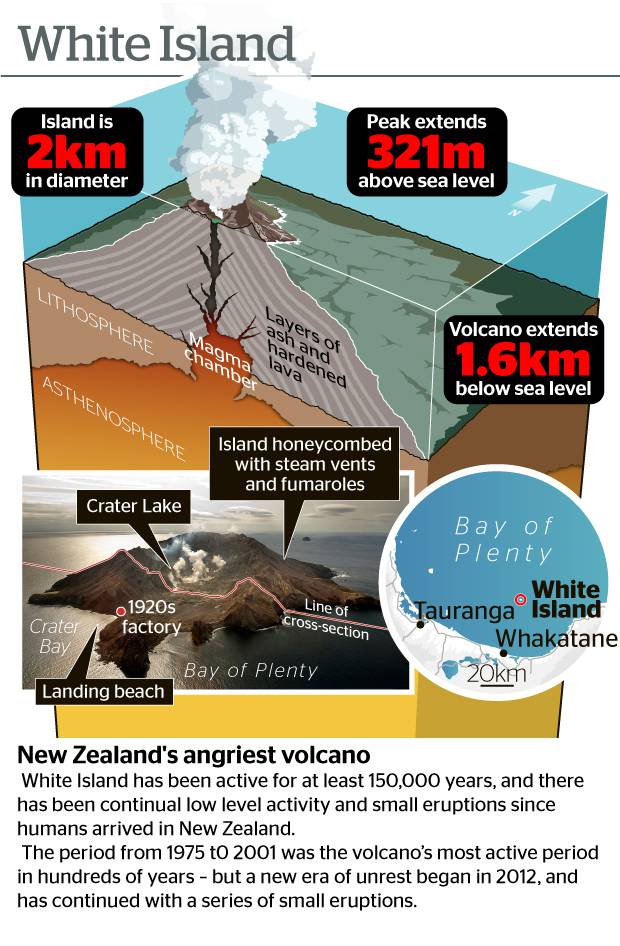 Built of layers of tephra and andesite lava flows, and born of the Pacific tectonic plate diving below the Australian plate, White Island is a unique and breath-taking example of what's called a stratovolcano, or composite cone volcano.

To step on to it is a little like walking on to the set of some old science-fiction movie depicting a strange alien moonscape.

Beneath its sheer walls of sulphur-yellow and iron-red, gas spews from the sides of hollow domes of rock, and hot streams bubble.

The island cuts a jagged figure across the Bay of Plenty's seaward horizon, characteristically crowned by a column of bright white, acidic steam that stings the eyes and skin, hinders breathing and sometimes damages clothing.

On average, up to 2000 tonnes of carbon dioxide and up to 800 tonnes of sulphur dioxide rise from the bowels of the volcano and hang unseen in the air each day. 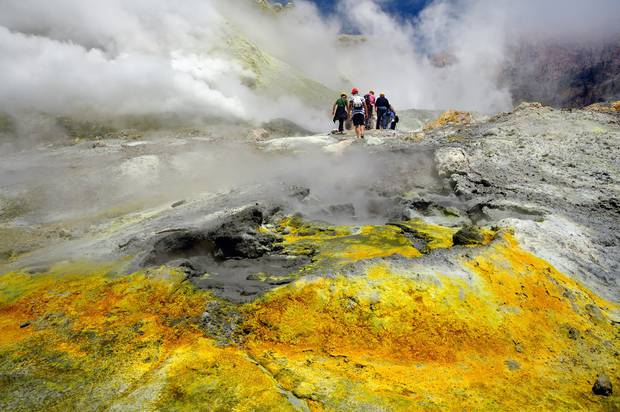 White Island offers one of the most dramatic environments that can be visited in New Zealand. Photo / File

This 2km-wide, 321m-high chunk of rock is just the tip of a monstrous submarine mountain that rises a staggering 1.6km from the sea floor, its fiery innards sealed shut from the surrounding Pacific Ocean.

Over more than 150,000 years, it has been building towards the sky, the magma chamber inside punching up like a fist and shooting off into fingers that form billowing vents at the surface.

The surface is transformed with every violent episode - what were once multiple large craters, or a huge lake once 90m deep, is now a rock-strewn field that can be traversed in a matter of minutes.

The field is enclosed by towering cliffs with great channels gouged by heavy rain running from the skyline to the floor below. 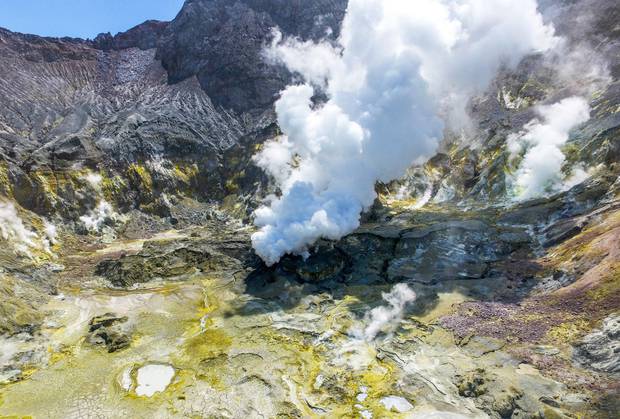 Beneath White Island's sheer walls of sulphur-yellow and iron-red, gas spews from the sides of hollow domes of rock, and hot streams bubble. Photo / Alan Gibson

Within its hellish amphitheatre, White Island has produced drama after drama: giant boulders hurled against its sides and into the sea, lahars from collapsed walls, ash vomited from its gaping vents and lava flows.

After an eruption in 2000, the ground was left so soft one could comfortably walk across the island in bare feet.

Despite its remote location, safely removed from the mainland, there have been casualties.

When the island was once mined for sulphur to make agricultural fertiliser, a devastating lahar swept through a campsite and killed all 10 workers, sparing only a cat named Peter by its rescuers. 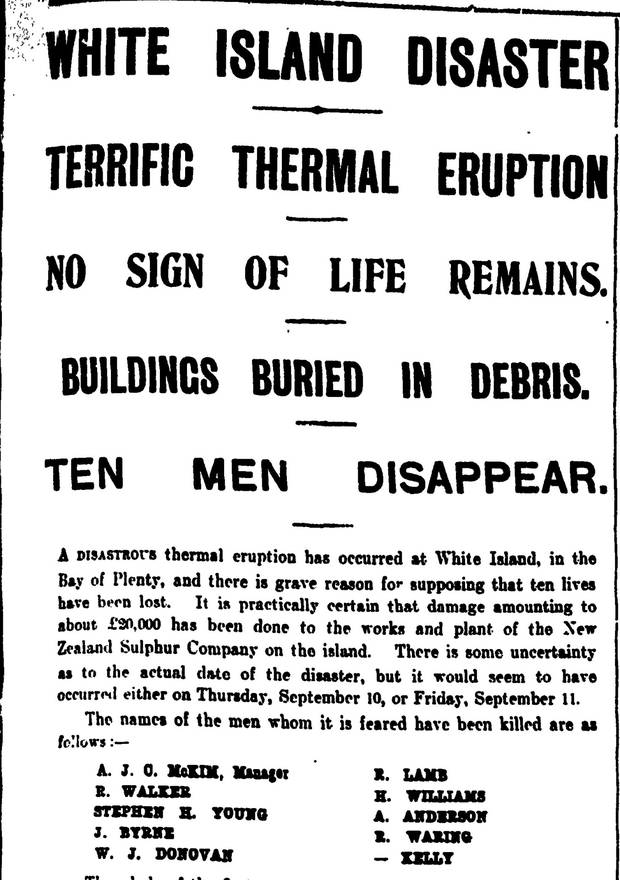 How the New Zealand Herald reported a devastating 1914 lahar and landslide on White Island that killed 11 men. Photo / File

Skeletons of concrete and iron are all that remain of a factory that ceased in the 1930s, after half a century of hard-fought efforts to reap boatloads of the pungent sulphur from the island.

Today, its sand is trod only by scientists, who arrive by helicopter for regular tests, and tourists - hundreds each week.

A DECADE OF ANGER

Although there have been regular rumbles at White Island since humans arrived in New Zealand, the period between the late 1960s and 2001, with its frequent small eruptions, was the most active in hundreds of years.

Ash and gas plumes rose as high as 10km, lava bombs and blocks were thrown into the sea and occasionally the glow of red hot rock was visible at night from the Bay of Plenty coast.

White Island settled – but then woke again in 2011, when a fresh batch of magma entered the volcano and began to rise. White Island's crater lake, which comes and goes, is coloured by the hardy extremophile bacteria that live within it. Photo / GNS Science

Its first eruption since 2001 played out in August 2012 – an event that might have drew more media coverage had Mt Tongariro not just thrown a tantrum of its own.

And then, its showpiece crater lake - its brilliant green waters coloured by bacteria that could somehow survive in a chemical soup 50 times more acidic than battery acid – vanished and reformed again.

In October 2013, the volcano blew again, with a moderate eruption that could have killed anyone who was near at the time. 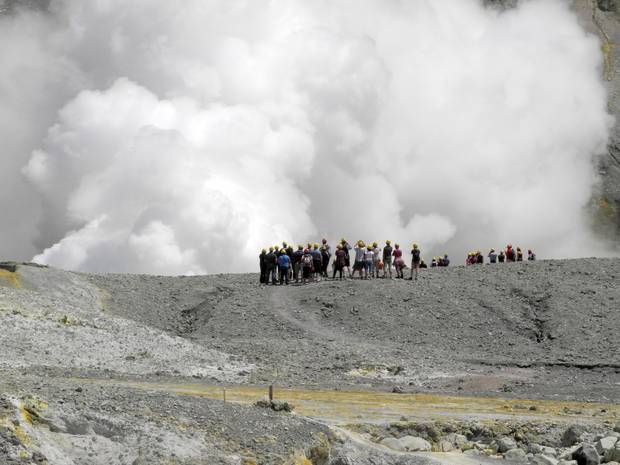 More eruptions came in April and September 2016 – the former proving powerful enough to blow 13m to 15m of the crater lake floor out of the volcano, and leaving it covered in a green-tinged ash, with a hot, dry consistency like that of apple crumble.

Again, the lake disappeared, only to return last year, for the fourth time since the start of the decade, with help from heavy rainfall from cyclones.

ANATOMY OF A VOLCANO

Just what triggers eruptions at White Island has been a picture as clouded as its crater floor.

Scientists know that magma has to be created at depth, some 5km to 8km below ground, then driven higher to just 1km to 2km beneath the surface.

"We know lots about many of the process involved, but no one simple explanation is present," GNS Science volcanologist Brad Scott said. 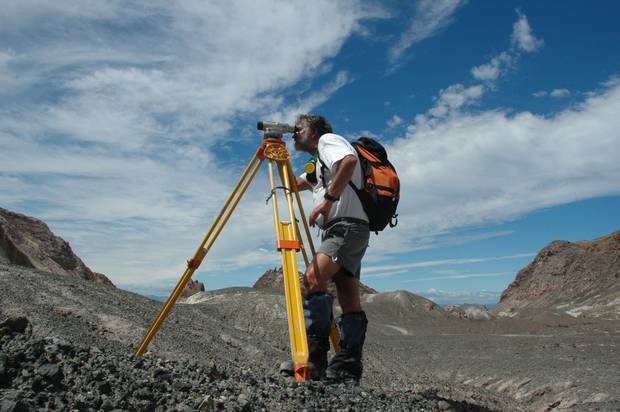 "In the bigger picture, it is driven a plate boundary process – however, each volcano is an individual."

That's a point scientists often had to make when White Island happened to stir at the same time as another event on the sprawling Taupo Volcanic Zone – like the geothermal mud pool that just burst into a Rotorua woman's backyard.

But such systems were no more related than two houses on the same block that were each having plumbing problems.

In White Island's case, its boisterous nature gave scientists ample opportunities to discover more about it.

After an eruption, geophysicists could pin-point which signals – be they seismic, magnetic or in resistivity – popped up and which didn't.

Chemists could look at how different gases changed, while geologists worked with the rocks tossed out, learning how they'd been born at depth and gradually pushed up from the earth. 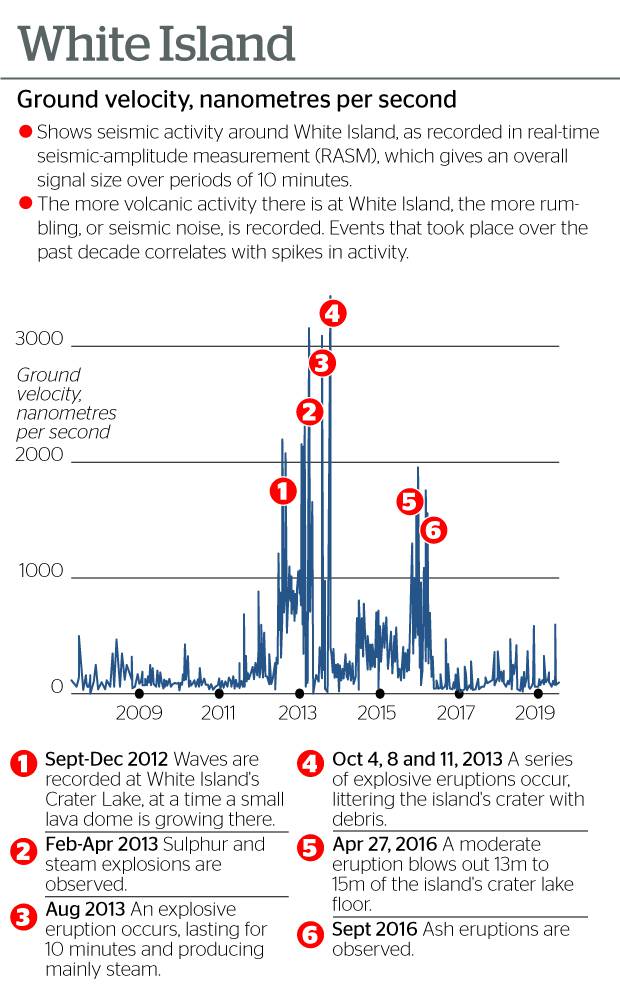 This afternoon, White Island erupted with enough ash and material that it was visible on MetService's radar.

Along with rising levels of SO2 gas, volcanic tremor had also increased from weak to moderate strength.

The crater lake level had been rising slowly since early August and weak geysering-type activity had been observed at the edge of the lake around the active vents on the west side of the crater floor.

Yet other recent measurements made on the island showed no significant changes - and the changes that had been seen weren't considered to be uncommon.

The patterns of signals had been compared to those through the 2011 to 2016 period - and suggested that White Island may be entering a period where eruptive activity was more likely than normal.

Today, that prediction came to pass.