Ports of Auckland has hit back against the clamour of calls for it to move, claiming import costs could rise up to $626 million a year.

Tony Gibson, port chief executive, said an NZIER study examined what would happen if the port was shut and freight was delivered to distant ports.

"Closing Auckland's port will increase the cost of imports by between $533m and $626m a year. Divided between 1.7 million Aucklanders, that's between $313 and $368 a year each," his statement said.

"That cost will fall on adults and children alike, hitting families the hardest. A family of four will pay between $1250-$1470 a year."

Only cruise ships would continue, potentially freeing $6b of land and relieving the CBD of congestion. 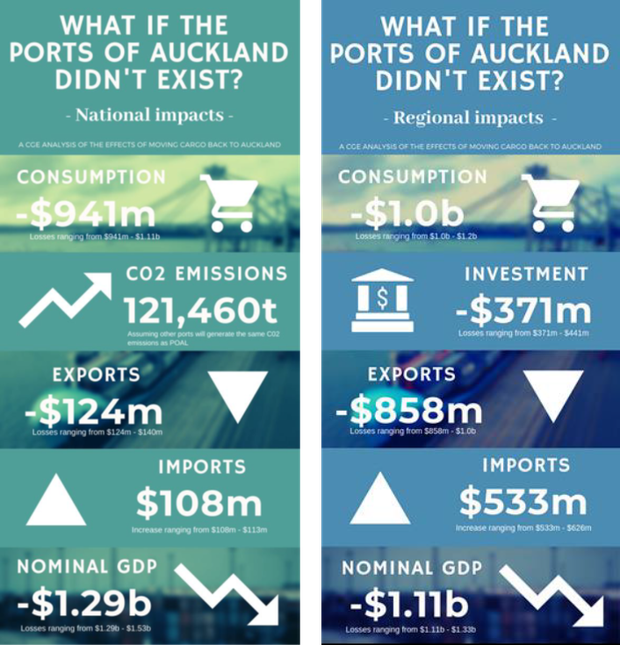 Ports of Auckland has fought back against the move. Photo / supplied

But Gibson hit back, saying carbon emissions would rise when freight was moved further. CO2 emissions will rise between 121,000 and 212,000 tonnes annually, he claimed.

"Some people claim that closing Auckland's port would not increase prices, but this is not true. Currently, the price of imports through distant ports like Tauranga is kept low by competition. Think of it as the 'Gull effect' for ports. Just as opening a Gull petrol station lowers prices at stations nearby, having a port in Auckland keeps import prices low," he said.

"I am also very concerned about the increase in carbon emissions that would be caused by using distant ports to handle Auckland's freight. This does not seem to be in line with the aims of the Zero Carbon Act, nor does it seem wise given the urgent need to tackle climate change," he said.

The port issued the findings of the NZIER study "because we believe a decision on the location of the port for our nation's largest city should be based on facts."

The release of the study today has already raised criticism.

Michael Goldwater, the spokesman for Waterfront 2029, criticised the NZIER's Laurence Kubiak "on the 'study' he was paid to write by Ports of Auckland, using ratepayers' money. Kubiak admits the report doesn't factor in reduced emissions if a new rail line was put in," Goldwater said.

He quoted Kubiak as saying: "We've made quite a bold assumption really ... this is just a thought experiment. We've assumed that Tauranga could handle all the extra volume and so could Northport [so] there wouldn't need to be any other investment made in the infrastructure between those locations and Auckland."

But Kubiak said Goldwater had not quoted him accurately and he was unsure where that quote had come from, perhaps a radio interview. The report was based on the assumption of no extra infrastructure investment either at the port or for road or rail, he stressed.

Kubiak said today he could not remember how much the report had cost "because it was done some time ago, most of it earlier this year."

Asked who paid for the study and what it cost port spokesman Matt Ball said: "Of course we did. We do an economic impact study every four to five years. Are you suggesting NZIER aren't independent? Not going to release the cost. Suggest you ask Laurence Kubiak if he will."