Armed officers dressed in body armour are about to hit the streets as police step up their response to increased gang rivalry and violent crime in Tauranga.

Police Minister Stuart Nash said the escalated response was a temporary measure aimed at tackling the latest flare-up between gangs. It also comes the day after two men where shot dead at a property in Omanawa.

A homicide inquiry was launched after the men were found at a home on Ormsby Lane, in Omanawa near Tauranga, on Tuesday evening.

Witnesses described running for their lives as gunshots ripped through the home just after 7.30pm.

Among those fleeing was a child.

Armed police swarmed to the residence, where they stood guard overnight. Police are still searching for the person or people responsible. 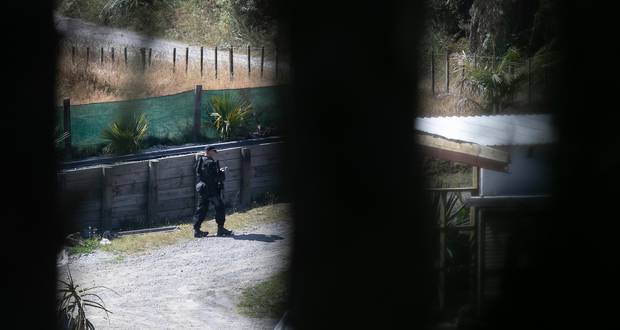 Armed police at the scene of the shooting. Photo / Alan Gibson

The deaths are the latest in an uptick of crime in the Bay of Plenty, following the arrival of the notorious Mongols Motorcycle Club in the area.

Their arrival stoked simmering tensions with established Tauranga gangs like the Greazy Dogs and the Mongrel Mob, with police warning the newcomers - hardened from inter-gang warfare with firearms - would radically change the criminal landscape.

Tuesday's homicide was the latest in a series of brazen shootings involving semi-automatic firearms, with a suspected arson along a row of the Bay of Plenty shops last month.

Nash said the Government was pouring more resources into policing the Bay of Plenty, targeting gangs and organised crime.

An extra 91 full-time police officers are now working across the Bay of Plenty district, a booster after an ongoing drop in number in the last five years of the previous government, Nash said.

"What's happening there is happening all around the country. Since March last year police have seized more than 2,000 illegal firearms from gangs and other criminals."

His urging follows Tauranga Mayor Tenby Powell's calls to the Government to get involved in the ongoing crime in the Bay of Plenty.

"As a council or as two local bodies, we can't do anything really, other than give support to the police by way of whatever we can do.

But if we're working with central Government, we might be able to find a solution.

Powell said it was time for the local community and iwi to gather for a hui and discuss the problems.

"I'm keen for a hui, a korero around what's going on, how we understand this and how we can manage this going forward. But we can't do that in isolation of central Government.

"It's time for these two main parties to stop snarking at each other over the issue. This is not the time, under any circumstances, for petty politics."

"This isn't affecting this area alone. This is happening in Napier, it happens all over the country."

"If I read the context around the anger, they're scared again and rightly so. We haven't seen this before, at this level.

"The police are doing a sterling job at containing this, but my concern is that there will be collateral damage, as in the Greerton fires.

"What I'm most worried about is that at some stage, if this continues at this frequency and aptitude, someone's going to get caught in the crossfire."

"This is traditionally a very safe community and all of sudden we find ourselves reading about not just crime at a level which is unprecedented, but very violent crime that we must all be concerned about."

He wants to see drugs removed from the area.

"Meth is destroying the fabric of our society and until we can find a way of cutting of the head of the meth monster, these issues are going to be ongoing."

Meanwhile, police have also stepped up their numbers in Palmerston North and Levin as they appeal for information following gang-related incidents.

On Saturday, a firearm was reportedly discharged at a property on Clyde Crescent, Palmerston North, about 7pm.

Only two days later, shots were reportedly fired from a vehicle at a property on McKenzie Street, Levin, about 2am, which was followed by a similar incident about 11pm on Goldsmith Crescent.

Inspector Sarah Stewart, Manawatu Area Commander said police want to speak to anyone who saw anything suspicious in those areas at those times.

"We are absolutely committed to holding those responsible to account.

While we believe there is no risk to the wider public, we have deployed extra police staff into the area"

"We can't do it alone, so please, if you have seen anything contact police.

"And if you see something suspicious or feel unsafe, call us immediately on 111."