Foreign Minister Winston Peters is heading to the US to meet with senior Trump administration officials for the second time in just over six months.

Peters will again meet Secretary of State Michael Pompeo during his Washington visit this week. But, unlike the last time he was in the US, Peters will not meet US Vice-President Mike Pence.

In a statement, Peters said he was looking forward to advancing New Zealand's political and economic relationship with the US, "as well as the Coalition Government's commitment to religious freedom, and to countering violent extremism worldwide".

"He's gonna try to work incrementally around the edges to do a number of things, and I think the free-trade talks would be top of his agenda."

Hoadley said the US is open to a free trade discussion, but it's not convenient for them yet.

He believes Peters could also again ask the US to take a greater role in the Pacific.

He is scheduled to deliver a speech in Washington which will focus on the importance of the two countries' bilateral relationship.

It would also be an opportunity to "further strengthen trade and economic co-operation between New Zealand and the United States," he said.

The speech will be highly anticipated among foreign policy watchers, given the content of Peters' speech at Georgetown University in December last year.

In his speech, sharing some of New Zealand's concerns about the Pacific and enlisting greater US support in the region was a significant area of focus.

"We unashamedly ask for the United States to engage more and we think it is in your vital interests to do so. And time is of the essence."

He also said it was New Zealand's view that the Asia-Pacific region had reached an "inflexion point" that required the attention of both Wellington and Washington.

Peters called on the US to do more when it came to providing aid to the Pacific.

It is likely Peters will continue his push to secure a free trade deal with the US.

New Zealand officials have been pushing for such a deal for years. 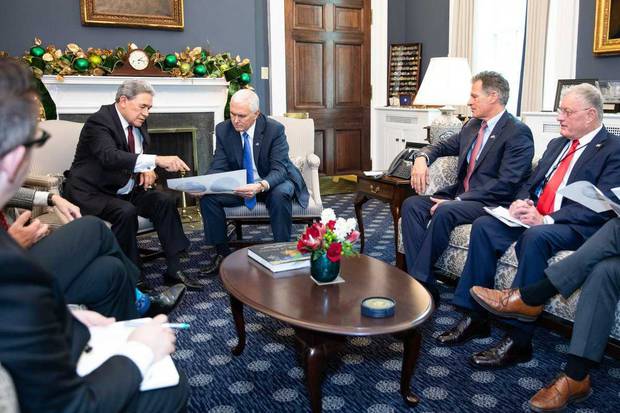 Foreign Minister Winston Peters chats to US vice-president Mike Pence on a trip to Washington in December. Photo / Supplied

Speaking at the Foreign Affairs and Trade Select Committee recently, Peters said he got a "personal commitment" from Pence that he was working on securing the free trade deal.

During his trip – from today until July 20 – he will meet Pompeo, as well as National Security Advisor John Bolton, director of National Intelligence Dan Coats, and Secretary of the Interior David Bernhardt.

"The United States is a close friend of New Zealand," Peters said this morning.

"Our countries share a strategic partnership based on our strong security relationship, close economic links and long-standing commitment to democracy."