The Parliamentary Commissioner for the Environment's latest report has described how, at nearly four million a year, international tourist numbers are putting nature under pressure – and those numbers could balloon to 10 to 13 million by 2050.

"The sheer numbers of people are eroding the sense of isolation, tranquillity and access to nature that many overseas tourists seek when visiting New Zealand," Upton said.

"And while we tend to focus on overseas visitors, the lion's share of tourist activity actually involves New Zealanders taking a break. We need to ask: are we in danger of killing the goose that laid the golden egg?"

Upton said tourism had often been seen as an "environmentally benign" form of economic development.

And it was this, together with it being so closely interwoven with the wider economy, that had probably shielded it from the scrutiny attached to other industries such as agriculture.

"We didn't get to where we are overnight," he said.

"The phenomenon of crowded sites, crowded skies and crowded parking lots is the result of more than a century's worth of promotional taxpayer subsidy."

His report found the biggest change had come with the number of people drawn to iconic sites – and this was rising with population growth and technological development.

While the Government had historically been heavily involved in developing and operating tourism infrastructure and services, in more recent times, its role had shifted to a focus on international marketing and oversight.

Since the 1990s, especially, the Government had progressively had "a more hands-off" approach to management – while overseas tourist numbers climbed from around a million in 1990 to 3.8 million today.

Across the same period, expenditure from overseas tourists rose from $2.3 billion to $16.2 billion today – making it our largest source of export earnings.

Upton's report singled out various strategies and targets that had propelled this growth; among them, Tourism New Zealand's goal in the 1990s to draw three million tourists by 2000, and the wildly-successful 100% Pure New Zealand campaign.

Some of the biggest environmental impacts singled out were degraded water quality, native species being lost or affected, new development, a "loss of natural quiet" from too many tourists – and rising emissions.

In 2017, emissions being generated by the tourism industry were estimated at around 12.5 million tonnes of carbon dioxide – around a third of which could be attributed to air travel.

Those spots seeing the most pressure was popular Tongariro Alpine Crossing, now drawing 130,000 trampers each year, and Milford Sound, where visitor numbers had doubled to nearly a million within just 15 years, and were on track to hit two million by 2035.

The report also turned to the amount of solid waste tourists were generating – some 70,000 to 180,000 tonnes of it each year, or equivalent to the annual amount sent to Hamilton's landfill.

But if tourism carried on under the status quo, the report projected that could grow to three million to 13 million tonnes by mid-century.

As concern has grown about the toll the surge was taking on the environment, governments had tried to respond with some measures to take the pressure off.

Yet each of those approaches still couldn't ease the mounting burden.

New initiatives like the International Visitor Conservation and Tourism Levy and the development of destination management plans were promising, Upton found, but "considerably more ambition" was needed.

While finding current policies wouldn't fix the problem, Upton stopped short of suggesting his own solutions, which might be looked at in a later report.

"The overwhelming majority of New Zealanders would surely agree that the terms of our hospitality and responsibility for looking after our tourist destinations are ones the wider community, not just the industry, should determine."

Iain Cossar, the Ministry of Business, Innovation and Employment's tourism general manager, acknowledged there was a need for a "fuller understanding and better management" of the impacts and costs.

"The costs of tourism include the broader impacts of visitors across financial, social, and environmental dimensions," Cossar said.

"A sustainable funding approach requires that tourism should meet the full costs of these wider impacts. A suite of tools is required to ensure that tourism can do this."

Along with the visitor levy, Cossar said the Government was rolling out new strategies and campaigns to address the pressures.

Other efforts included responsible camping initiatives, which the Government had put an extra $17m toward, and had driven "a dramatic fall" in the number of issues local councils were dealing with, Tourism Minister Kelvin Davis said.

"We also launched the Tiaki Promise last year, which is the result of Government and industry taking action together to guide positive behaviour and encourage visitors and Kiwis to care for and protect Aotearoa.

"There is a lot to digest in this report, and we look forward to doing that in coming months to better understand what any next steps might look like. "

Gary Taylor, chair of the Environmental Defence Society, also described the report as a useful summary, and added the society was also undertaking its own investigation into the issue.

Forest and Bird chief executive Kevin Hague believed the focus should be on quality over quantity.

"The key has to be encouraging a longer, deeper, experience."

Regina Scheyvens, a Professor of Development Studies at Massey University, warned that a business-as-usual approach to growing our tourism sector would have "devastating consequences" for the natural environment. 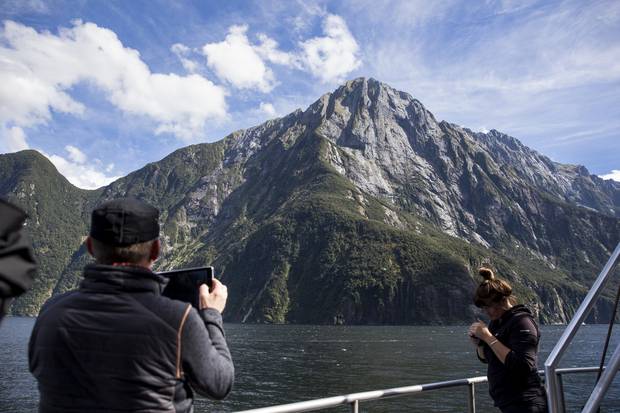 "The report, quite rightly, notes that in contrast to the 'win-win-win' rhetoric promulgated by the sector trade-offs will need to be made – however trading on the integrity and wellbeing of our natural environment should not be an option," she said.

"We need to consider how tourism can protect the environment while enhancing the wellbeing of New Zealanders, both those working in the industry and those living in the places that tourists like to visit."

To protect natural assets – especially iconic sites and walks – she said it was likely that quotas would be needed.

"For example, charging $20 per adult during the peak season and putting a cap on total numbers per day to do popular walks like the Tongariro Crossing or Roy's Peak, could help to control the impact."

Further, she saw a need to inform future policy with Māori values, and boost resourcing for the Department of Conservation so it could redesign tourist experiences in the areas it managed.

Mark Newton, a researcher in people, policy and planning at the Nelson-based Cawthron Institute, said New Zealand had to decide whether it wanted to make a planned transition to a more sustainable tourism future - or to trust that continued growth to 2050 was viable.

"New Zealand has a long history of concern for the environmental impacts of tourism, but when 52 per cent of New Zealanders now think predicted tourism growth is 'too much', 43 per cent think tourism puts too much pressure on New Zealand, and more than a quarter think there are too many international visitors, it's time to take notice."