The man police shot dead in an Auckland supermarket today after stabbing several shoppers is a known Isis sympathiser whom police had previously arrested for allegedly planning a "lone wolf" knife attack.

He was fatally shot by police officers after six shoppers were injured — including three critically — in horrific scenes at the New Lynn mall Countdown this afternoon.

The injured are believed to have been attacked before their assailant was gunned down by police.

The offender is a 32-year-old man — known only as "S" for legal reasons — who has been on the police's radar for several years, the Herald revealed last month.

He had only recently been released from prison and was under constant surveillance from police, including an armed tactical team, and national security agencies.

Prime Minister Jacinda Ardern told media the attack was carried out by an individual, not a faith, not a culture, not an ethnicity, but an individual person gripped by an ideology that is not supported here by anyone.

She said the attacker was Isis-inspired.

"We have utilised every legal and surveillance power available to us to keep people safe from this individual," Ardern said.

Last year, the Crown had sought to prosecute S under the Terrorism Suppression Act 2002, but a High Court judge ruled that preparing a terrorist attack was not in itself an offence under the legislation.

S was instead prosecuted on lesser charges. On May 26 this year, he was found guilty by a jury of possessing propaganda-style material supportive of Islamic State.

He was acquitted on other charges of possessing a graphic video depicting a prisoner being decapitated and possession of an offensive weapon.

According to a report prepared for his sentencing in July, S has "the means and motivation to commit violence in the community".

He was sentenced to one year of supervision, which was to be served at a West Auckland mosque. During his trial, S told the jury: "You're worried about one knife, I am telling you I will buy 10 knives. It's about my rights."

S' internet history, the court heard, also revealed chilling searches, some of which had been electronically bookmarked. They included "safety and security guidelines for lone-wolf mujahideen", looking for a hunting knife, camouflage pants, Islamic State dress and New Zealand prison clothes and food.

S also made efforts to research the case of Imran Patel, an Isis supporter and the first person in New Zealand jailed for distributing extremist videos. Patel was stopped at Auckland International Airport trying to leave for Syria with a companion.

The internet history on S's devices further revealed a booklet for Isis operatives to help them avoid detection by Western countries' security and intelligence agencies.

An internet video, the trial heard, purported to provide instructions on "How to attack kuffar and how to make explosive devices". Kuffar, or kafir, is an Arabic term used to describe an infidel or non-believer.

However, in autumn 2016 he came to the attention of police because of "staunchly anti-Western and violent" material being posted on his Facebook page.

S was given a formal warning by police but continued posting violent material, including a comment saying: "One day I will go back to my country and I will find kiwi scums in my country ... and I will show them ... what will happen when you mess with S while I'm in their country. If you're tough in your country ... we are tougher in our country scums #payback". 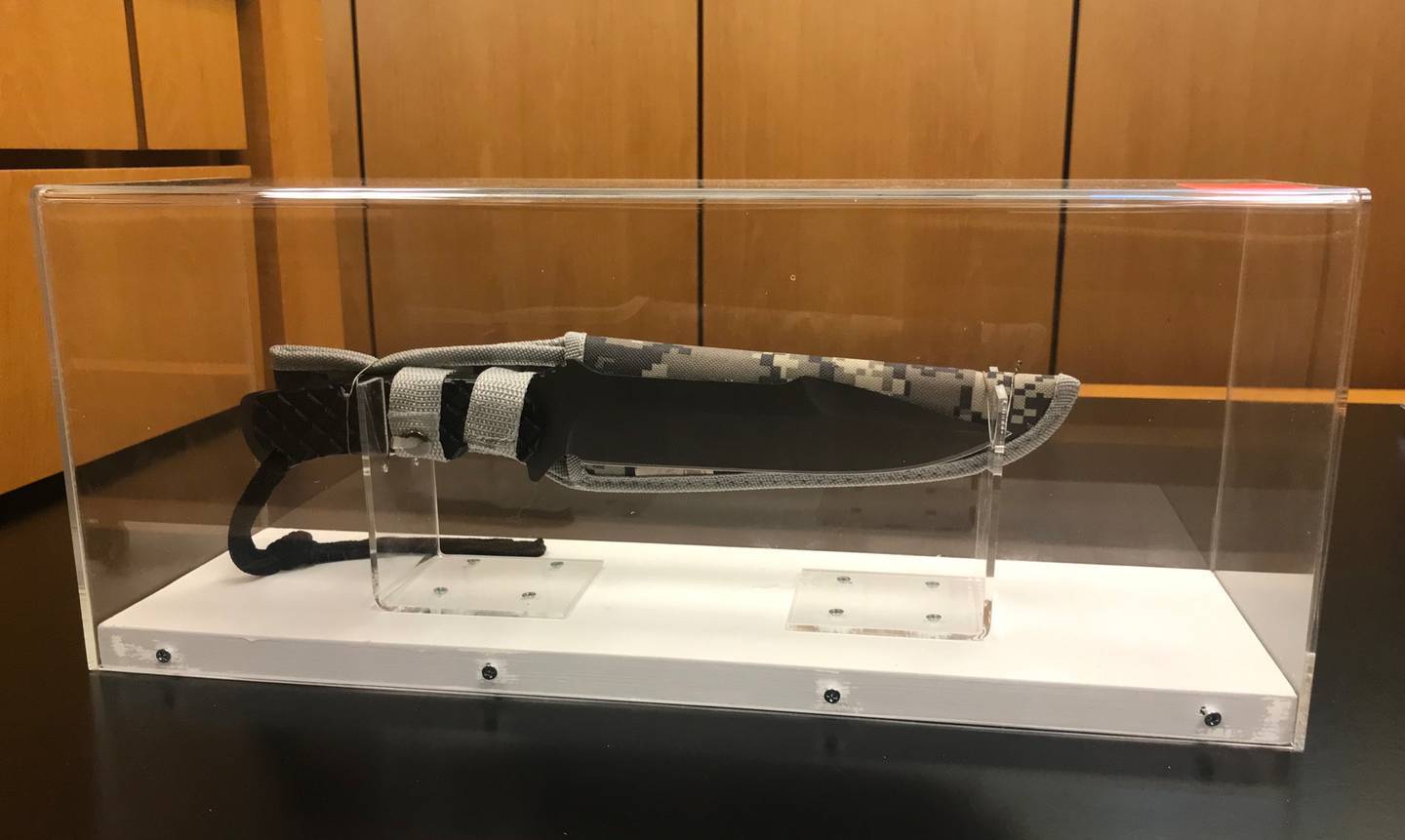 The hunting knife purchased by S was presented as evidence in the trial earlier this year. Photo / NZ Herald

According to police, S told a fellow worshipper at a mosque that he planned to join Isis in Syria.

In May 2017, he was detained at Auckland International Airport after booking a one-way ticket to Singapore. A search of S' apartment in Auckland found material that glorified violence, including images of him posing with an air rifle, and a large hunting knife hidden under his mattress.

S was held in custody, denied bail for more than a year, and eventually pleaded guilty to charges of distributing restricted material. Because of the length of time S had already spent in custody, he was sentenced by a High Court judge to supervision in 2018.

S did not abandon his extremist views. The day after he was released from custody — August 7, 2018 — he purchased an identical hunting knife. Counterterrorism police, who had continued surveillance on S, arrested him again.

Another search of his apartment found a large amount of violent material, including an Islamic State video about how to kill "non-believers" in which a masked man cut a prisoner's throat and wrists.

This time, prosecutors sought to charge S under the Terrorism Suppression Act but were denied by the High Court.

In his ruling, Justice Matthew Downs said: "Terrorism is a great evil. 'Lone wolf' terrorist attacks with knives and other makeshift weapons, such as cars or trucks, are far from unheard of. Recent events in Christchurch demonstrate New Zealand should not be complacent.

"Some among us are prepared to use lethal violence for ideological, political or religious causes. The absence of an offence of planning or preparing a terrorist act ... could be an Achilles' heel."

However, the judge added: "It is not open to a Court to create an offence, whether in the guise of statutory construction or otherwise. The issue is for Parliament."

The case illustrated a flaw in New Zealand's counterterrorism powers that police and security agencies have long argued constrains their ability to keep the public safe from violent extremists — but which successive governments failed to resolve.

Since then, the Labour government has proposed new anti-terror powers.

The judgment was cited by government officials as one of the key events leading to the introduction of new anti-terror powers in April. The judge's concerns were echoed by the Royal Commission of Inquiry into the Christchurch attacks when it presented its findings in November.