You can bring your own mobile number, or get one with Kogan's 028 prefix.

The new mobile service operator's plan (excluding a $4.90 first-month special) is $17.90 a month for 1.5GB of data and unlimited calls and texts (a useful price, but light on data next to its plans across the ditch).

That compares to Spark's Skinny brand, which offers 200 rollover minutes, unlimited txts and 1.25GB of rollover data for $16/month; 2degrees offers the same features for $19/month, but also has a $10/month plan with 100 minutes and 250MB (a quarter of a gigabyte) of data.

Kogan is a budget online retailer founded by Ruslan Kogan - whose parents arrived from then-Communist Belarus in 1990 with $90 in their pocket.

The 37-year-old has built an e-commerce empire that is now listed on the ASX, with holding giving him a personal wealth of close to half a billion dollars. His companies assets today include the remnants of Dick Smith NZ, with the brand used to harvest online sales. 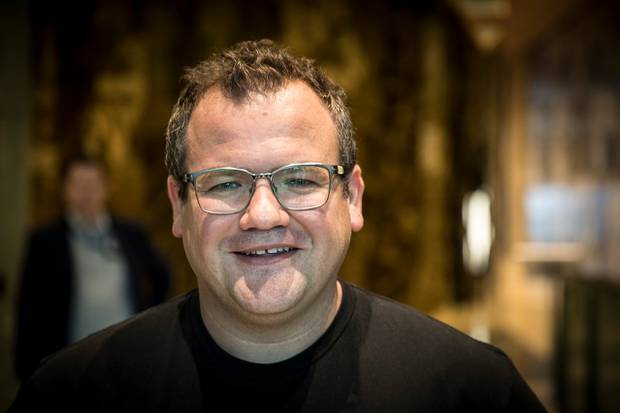 Kogan has no mobile network of its own, but will piggyback on Vodafone NZ's through a wholesale deal (or mobile virtual network operator arrangement or MVNO in telco-speak).

While Kogan Mobile is very competitive on price, there are three factors potential customers will want to bear in mind.

One is 5G. Kogan Mobile can use all of Vodafone NZ's network today. But this morning, Vodafone NZ boss Jason Paris said it had yet to be decided if Kogan would get access to its 5G (fifth-generation) upgrade, rolling out from December.

Another is that Kogan Mobile only offers online-only support. There's no helpline. Founder and CEO Ruslan Kogan woudn't give a guaranteed response time, but said his company operated in a competitive market.

Travellers will also want to check out Kogan Mobile's roaming costs, which aren't as keenly priced as its regular monthly plans.

Despite potentially with-holding 5G goodies, Paris appeared alongside Ruslan Kogan at a launch event in Auckland today to boost its prospects. He described his company's new partner as "the Pak N Save of mobile."

What's in it for Vodafone NZ? The telco will clip the ticket on every account as Kogan's wholesaler. The Kogan Mobile deal will also be another weapon in its arsenal against Spark's budget brand, Skinny. And it will help keep the Commerce Commission off its back.

Kogan Mobile launched in Australia - also in a wholesale deal with Vodafone - in 2015.

Today it claims 2 per cent share of Australia's 19.8 million mobile connections or just under 400,000 customers.

The Commerce Commission recently wrapped up an investigation of the mobile market, deciding their was no need for further regulation.

The regulator's lengthly look at mobile was sparked, in part, by a letter form (then) Communications Minister Simon Bridges to the Commerce Commission in 2017, questioning why MVNO's accounted for less than 1 per cent of the NZ mobile market despite prospering and boosting competition the UK and elsewhere.

Ultimately, however, the ComCom found that NZ mobile plans are cheaper than most OECD countries (though notably, not Australia) and took no action.

Callander said while MVNO deals were possible - his company has one for its Orcon Mobile and Slingshot Mobile products - contracts are restrictive. There needs to be more freedom around what pricing and services can be offered, he said.

Today, Telecommunications Users Association head Craig Young said, "I agree the Commission could have been a bit tougher, but obviously they knew stuff that we didn't."

But he said Kogan Mobile has the potential to be a strong MVNO brand in New Zealand and that "it's a good start." Young's organisation preferred to see a solution come from the market than a regulator.

He did have a challenge for Kogan Mobile, however. Young noted that consumers in the EU can now "roam as if they were at home." He called on Kogan to introduce a similar deal for Australasia.