The rowdy English family travelling New Zealand can officially be dubbed as Grinches after they allegedly stole a Christmas tree from an Auckland petrol station.

Footage captured on CCTV cameras at Caltex in Albany snared the moment four members of the family enter the store on December 7.

As two adult women look around the store and grab items from the shelves, two children appear to be caught walking out the door with a Christmas tree.

One of the children was also caught on camera allegedly leaving the store with a pair of sunglasses.

Caltex regional manager Ankur Patel told the Herald there were two trees in the store and it wasn't until the next morning they realised one was gone.

"One of the kids took the small Christmas tree - we had two, one big, one small - and the kids just picked up the small one and walked out," he said.

"They came around 9.30 and we only had one staff and he was dealing with the queue of customers. We didn't realise the tree was gone until the next morning."

A child can be seen stealing a Christmas tree. Photo / Supplied

The troublesome family returned to the petrol station on New Year's Eve, this time with a car which allowed the station to record their licence plate.

So, when the family returned for the third time the station's security system alerted staff of their unwelcomed arrival.

Staff confronted a member of the group and asked them to pay for stolen items they took from the station without paying.

"A woman came back and the site manager talked to her and showed her pictures but she told him in the face 'that's not me'," Patel said.

However, a man eventually paid for some of the stolen items but refused to pay other outstanding bills and the Caltex station contacted police.

It is just the latest in a string of incidents from the 12-strong group, who have caused a series of incidents since they arrived in New Zealand several days ago.

This includes littering, trying to scam restaurants, and being abusive to New Zealanders.

They have now attracted the attention of Immigration New Zealand.

Peter Devoy, Assistant General Manager of Immigration New Zealand, told Andrew Dickens that they have granted Deportation Liability Notices to four of the individuals, which urges them to leave the country.

It occurred after they were abusive towards staff of a Hamilton Burger King yesterday.

"Their disorderly behaviour at Burger King prompted the managers to call police, and we went with police, knowing the background of these people as obviously they hit the media before yesterday."

A boy is captured on CCTV with a pair of sunglasses. Photo / Supplied

Auckland Mayor Phil Goff has waded into the thick of things again after calling the group "a bunch of a***holes" earlier this week on bFM.

Today, the Mayor said on Facebook it was "justified" for members of the public to tell the tourists to go back to were they came from.

"Telling visitors to NZ to go home is pretty unusual behaviour by Kiwis but in the case of tourists from Liverpool who have been creating mayhem around Auckland it's totally justified," he said.

"They came to public attention after leaving their trash on Takapuna Beach and abusing those who told them to pick it up.

"I hope authorities can hold them to account for this and I'm encouraging it. And getting rid of them out of the country as quickly as possible."

The court heard that Cash stole a can of Red Bull from a Caltex service station at Albany on December 31. 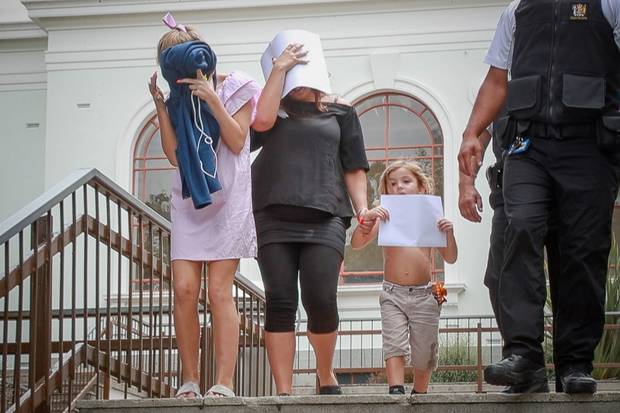 At the same time another woman she was with hid a bottle of Primo milk under her dressing gown while paying for a packet of cigarettes.

Cash allegedly waited at the door until the service station assistant was distracted serving the other woman and left with the can of Red Bull.

The other woman allegedly did not pay for the Primo.

Her lawyer told the court she does not remember the incident but accepts the theft was caught on CCTV video.

She has been convicted and ordered to pay $55 in reparation.

Patel said the Caltex workers were "honestly shocked" by the actions of the group and said it was pleasing "in a way" the group was punished.

Cash has also been issued a notice, Devoy confirmed.