If Maria Folau had her way, her Silver Ferns retirement wouldn't have been announced.

Maria remains unavailable to speak to media, as has been the case since July's Netball World Cup – believed to be heavily due to her husband Israel Folau's explosive legal battle against Rugby Australia (RA).

Israel took RA to court earlier this year after his multi-million dollar contract was terminated over his controversial social media posts in which he stated "hell awaits" homosexuals. 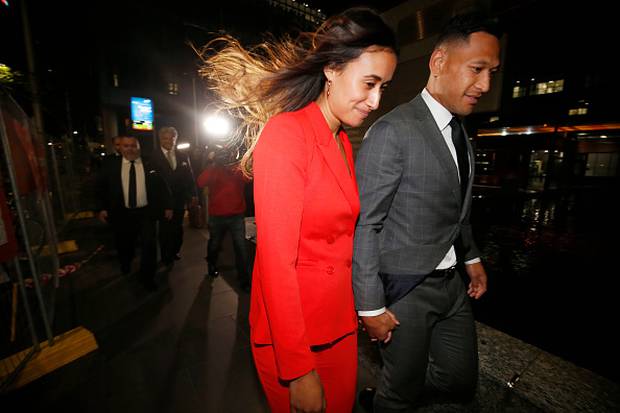 The former Wallaby has since settled his legal dispute with the national body for a confidential amount.

The saga saw Maria backtrack significantly from the spotlight, somewhat overshadowing her departure from the black dress.

Speaking to Radio Sport's D'Arcy Waldegrave, Silver Ferns head coach Noeline Taurua revealed the 32-year-old had to be pushed for the green light on announcing her retirement publically.

"I think over the last couple of years she has gone quiet in regards to the whole social media thing and what's been happening privately," Taurua said. "She has really shied away in media not only when she's been away from the Silver Ferns but also within the mix as well.

"We've respected her for that, I'm really glad that she's actually done a media release, it's actually a positive because if she had her own way, she'll just go off into the sunset. That's a start and hopefully, we can get her back in and pay tribute to her in the near future."

She said her ability to separate what was happening at the time and focus on the job at hand was key to the team's success in Liverpool.

"It got a wee bit dicey especially as we headed into the Netball World Cup and there's been a lot going on," Taurua said. "I think the professionalism from not only of her but also the Silver Ferns squad to be able to back her.

"She's heading into new realms in her own life and we're really happy for her. She's in love and everything is so positive for her at the moment."

The Silver Ferns will embark on their first campaign without the services of Maria next month when they take on England, Jamaica and South Africa in the Nations Cup.

World Cup gold medallists Bailey Mes, Ameliaranne Ekenasio and Te Paea Selby-Rickit are set to lead the attacking end in the four-game series, with 22-year-old Maia Wilson given the nod in the fourth shooting spot.

The Silver Ferns open their campaign against the host nation in Nottingham on January 19.